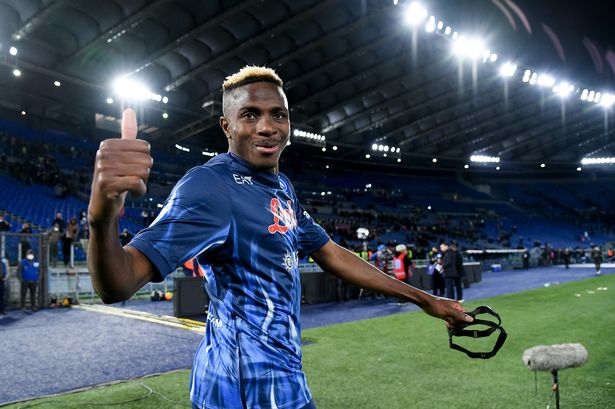 That is according to a report by Napoli expert and Italian journalist Ciro Venerato, as cited by Tutto Napoli, who claim that Rangnick wants to add the Nigerian to his attacking options next season. United are set to prioritize the addition of a new, younger striker this coming summer and Osimhen fits the profile.

United, who face arch rivals Manchester City on Sunday afternoon, have long since pinpointed Borussia Dortmund star Erling Haaland as their number one target to become the new face of their forward line. However, despite the €75million release clause within his contract becoming active this summer, United are not expected to win the race for his signature.

The likes of Manchester City, Paris Saint-Germain and Real Madrid are all chasing the Norway international and are keen on adding him to their respective armouries. Rangnick, as reported by the Manchester Evening News in December, it is pushing for the striker to join the club, but the chances of a deal happening seem slim.

Alternatively, United, according to the report in Italy, have turned their attentions to Osimhen. The 23-year-old, who has scored 11 times in 22 appearances for Napoli this term, has gone from strength-to-strength in recent seasons.

He has joined the Serie A giants from French club Lille in 2020 and has scored 21 goals in 52 games since. He has also chipped in with seven assists, four of which have come this season.

According to the report, Rangnick ‘wants’ to replace Ronaldo with Osimhen and believes the Nigerian will help offer a fresh look to United’s attacking options. Furthermore, it is claimed that Napoli are willing to sell the striker in the summer, but only if their £84million valuation is met.

Meanwhile, United are ‘considering a move for highly-rated Southampton right-back Tino Livramento to strengthen their defensive options, a report by Calciomercato claims. He joined the Saints from Chelsea last summer and has been one of the surprise stars of the season.

The England Under-21 international, who is only 19, has racked up 21 Premier League appearances this season, scoring one goal and claiming two assists. He has attracted plenty of praise and admiration and is already being tipped to become an England regular in years to come.

Continuing to go from strength-to-strength, Livramento is already being linked with several big-name clubs, including former employers Chelsea, who reportedly have the option to re-sign him in 2023 for £50million. United, however, are also keeping a watchful eye on the youngster.

United are set to focus on strengthening their right-back options this summer after both Aaron Wan-Bissaka and Diogo Dalot have struggled to make the position their own this term. Kieran Tripper was a leading target for United last summer ahead of him joining Newcastle United in January.