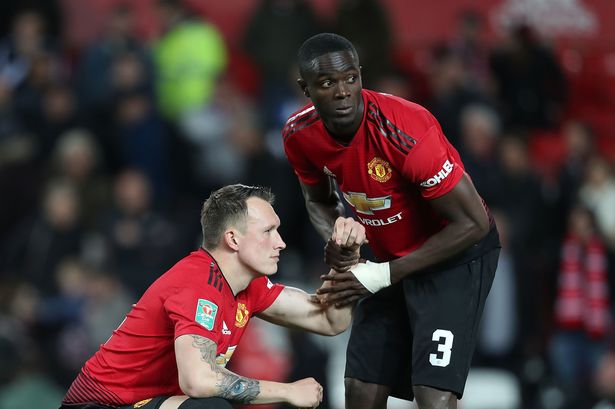 Beyond the omissions of four England internationals from the Manchester United XI on Saturday there was an intriguing selection on the bench that was overlooked.

Phil Jones was there again, which was hardly noteworthy, only this time he was listed ahead of Eric Bailly. Bailly, fit as of two weeks ago, was not on the bench at Leeds either and only got a plane ticket to Madrid due to the expanded bench.

However long it lasts, Bailly is now the fifth-choice centre-back at United and behind Jones, starter of one game in two years. In almost six years, Bailly has played 113 times out of a possible 332 for United and may struggle to end the season with a 20-game seasonal average at the club.

This is as predictable as Bailly returning from the Africa Cup of Nations with an injury. Six times Bailly has reported at Carrington after international duty with an injury or ailment.

Ole Gunnar Solskjaer expressed his dissatisfaction with Bailly’s paltry number of appearances a year ago and United, true to form, then tied down Bailly on a new contract. It was telling Bailly, who had just turned 27 at the time, received a minimum three-year deal, a reflection of his injury-prone status. Almost every 20-something is guaranteed four years.

Bailly was last year’s incongruous contract renewal. United planned on signing a center half in the summer, knew they had a chance of getting Raphael Varane, Bailly had played a paltry 15 times by mid-April and was out of contract in 2022. Rather than sell him, they kept him. This season, Bailly has appeared seven times for United.

During United’s dialogue with Villarreal regarding Pau Torres, Bailly was mentioned and United really ought to have pushed for an agreeable swap deal. Instead, they have a player who will contribute to a flattering assets sheet but is also inflating the wage bill whilst barely playing.

Bailly should have been sold out of principle, having issued an ultimatum that he played on the eve of the Europa League final. Solskjaer should have shown teeth, picked Axel Tuanzebe and directed Bailly towards the exit.

What you see is what you get with Bailly. One game he can be Herculean, such as at Atalanta, and the next a haphazard liability. He scored an own goal against Manchester City four days after impressing in Bergamo.

Bailly has started more times for the Ivory Coast than United this term. Two of those were against West Ham and Young Boys at Old Trafford – United’s two meaningless matches of the campaign – and in the last against Burnley, Bailly hobbled off.

There have been times this season where Bailly was illogically overlooked, primarily through Solskjaer’s soft selections. Bailly took umbrage with Maguire’s preferential treatment under Solskjaer. Maguire joined United three years after Bailly and has already played more times for the club.

Ideally, United would jettison Bailly and Jones in the summer. Both are said to want to leave yet their actions have spoken louder. Jones declined Bordeaux’s offer of a loan in January and Bailly accepted a renewal 10 months ago when all indications suggested he would start this season as fourth-choice centre-back at best.

See also  Chile Elections 2021: The Faces of Change in Chile: A New Generation Comes to La Moneda with Boric | International

He is now fifth.

Catch up on all the latest United headlines