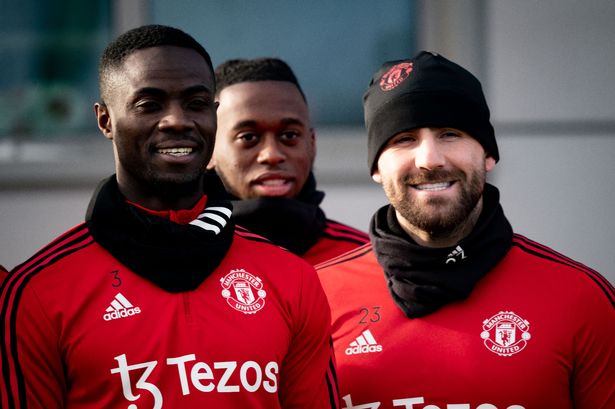 Manchester United fans might well relish the latest international break and the escapism it offers after an underwhelming season so far.

A week ago came confirmation of another trophyless campaign following the Champions League exit to Atletico Madrid, while the weekend was further confirmation of the gulf between United and their most fierce rivals.

In a week which saw Man City, Liverpool and Chelsea book places in both the quarter-finals of the Champions League and the semi-finals of the FA Cup, United’s own slender hopes of a meagre top-four finish were dented by important wins for both Arsenal and Tottenham.

READ MORE: Manchester United fans might have to accept the gutting reality about Bruno Fernandes

It would be very easy for heads to drop after such a disappointing week, but amid the negativity, the international break will offer some players a shot at redemption, a final chance to prove why they are deserving of another chance when club football returns.

Eric Bailly is one of those individuals. The Ivorian was given promises about regular playing time when he signed his new contract a year ago, but remains a peripheral figure at Old Trafford, one of many squad players who never seem to get a chance no matter how out-of-sorts their competitors might be.

In each of his six seasons at the club, there have been brief glimpses of a genuine top-class central defender, but all too often he has come crashing down to earth with comical mistakes or rash decision-making.

Bailly’s fluctuating form has almost mirrored that of the team since he joined from Villarreal. There have been plenty of false dawns and freak runs highlighted by irregular moments of genuine world-class ability, though over the course of the season such standards have slipped and inconsistency has been a major problem.

The 27-year-old has not been helped by injuries either. Whether it be rotten luck or his own erratic style of defending, which has contributed to spells on the sideline, Bailly simply hasn’t been available regularly enough to ever be a long-term option beyond his impressive first season at the club. He has missed a staggering 103 matches because of 16 different injuries and illnesses since he joined.

Yet with United’s defensive issues so well-documented this season, there is still a slim hope of a lifeline as the club prepares for another seismic summer of change.

Signing a new centre-back is by no means the priority this summer, that lies with central midfield and attack, but it is certainly an area of ​​interest if there is an attainable target for an affordable price once other areas have been strengthened.

There is every chance United could go into next season without any reinforcement in defence, and as a result, there could be a lifeline for Bailly if he were to find form before the end of the season, and actually be given a chance to provide his worth under Ralf Rangnick.

With matches against France and England during the international break, there would be no greater stage for Bailly to put in a couple of dazzling performances to send a timely reminder of what he could still offer before the end of the campaign.

After so many false dawns, it is right to be skeptical of Bailly as a long-term solution to United’s defensive dilemma, but with the current candidates doing little to convince, he surely deserves one last chance.