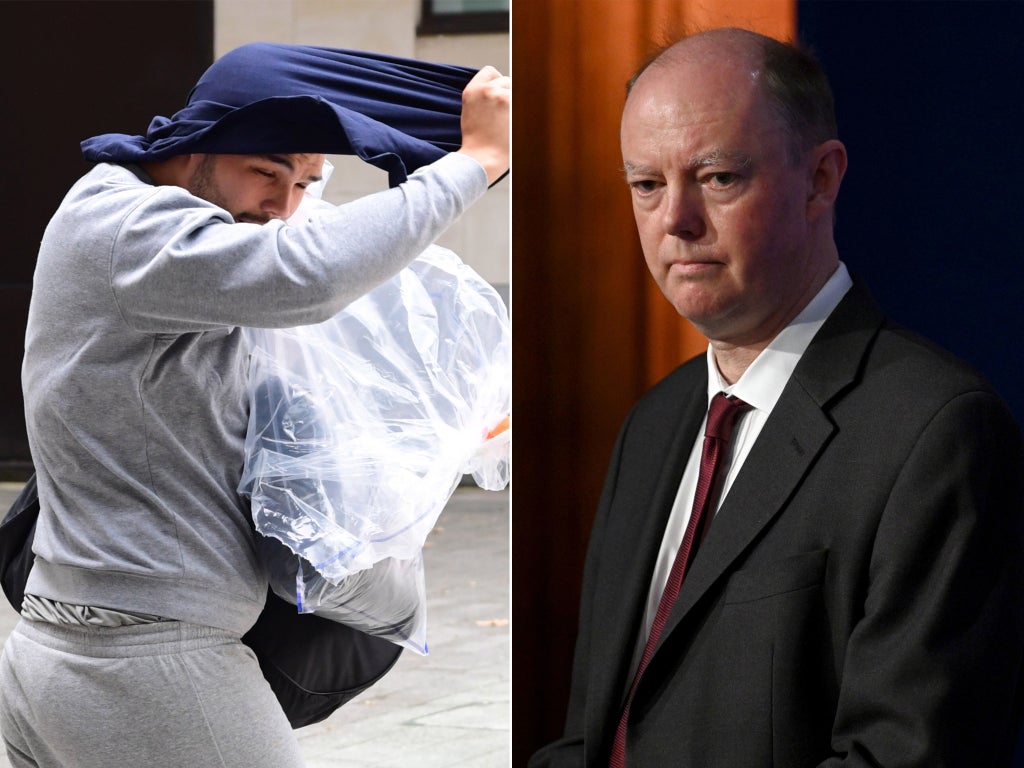 A man who was filmed accosting Sir Chris Whitty in a park has been jailed for eight weeks after admitting harassment.

He began vaping in the dock as the sentence was passed, before stretching and singing as he was taken to the cells, as he was sentenced on Thursday afternoon.

Footage of the June incident, lasting around 20 seconds and showing Chew alongside Lewis Hughes, was widely shared on social media.

Chew, of Chelmsford, Essex, admitted a charge of intent to cause harassment, alarm or distress to Sir Chris.

He also pleaded guilty to obstructing police by providing his brother’s name and old address when questioned.

Hughes, 24, earlier pleaded guilty to a charge of assault by beating and was sentenced last July. He lost his job as an estate agent as a result of the incident.

Prosecutor Iestyn Morgan said that Chew had started filming Sir Chris on his phone while Hughes grabbed the chief medical officer in a headlock. Mr Morgan added that Sir Chris had suffered “the added humiliation of the recording being forwarded and uploaded”.

Rabah Kherbane, defending, argued that Chew has learning difficulties, “intellectual difficulties” and “delayed maturity”, and often becomes “frustrated” when trying to communicate with others.

Mr Goldspring replied by saying Sir Chris could clearly be heard saying “No” to the men, adding that Chew should surely have been able to understand that “no means no”.

Mr Kherbane went on to insist that Chew “really regretted to cause that level of discomfort to someone else”.

Mr Goldspring responded that the fact he gave police the wrong name and address suggested he had not shown remorse.

The trial was scheduled for last month, but it was postponed as Chew, wearing a dressing gown and appearing via video link, said he was too ill for it to take place.

Earlier in January, Mr Kherbane had reminded the court of the background to the case, noting that, at the previous hearing, Chew’s former solicitor had withdrawn due to being “professionally embarrassed”.

The barrister said the defendant had several conditions, including attention deficit hyperactivity disorder (ADHD) and autism, which would make it difficult for him to follow proceedings.

During an earlier hearing, Chew had requested that Sir Chris attend the trial, but this was denied by the judge.

“The law is that I have the right for him to come. I want Chris Whitty there,” Chew told Mr Goldspring, who responded: “I suspect I know a bit more about the law than you do.”

Hughes, of Romford in Essex, was handed an eight-week prison sentence, suspended for two years, and was ordered to pay a total of £307 in fines and compensation.

He was labeled “yobbish” by Mr Goldspring and was criticized for leaving Sir Chris “humiliated” after putting him in a headlock.