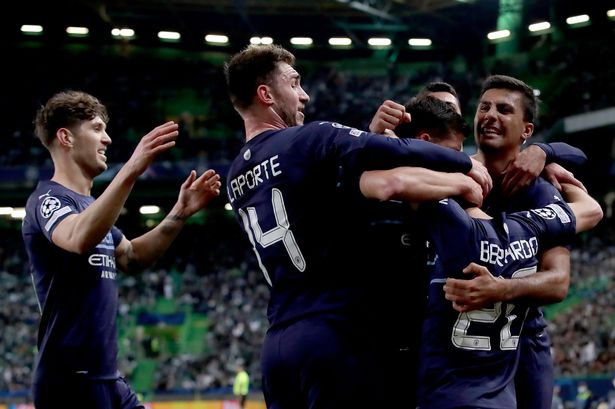 Riyad Mahrez has racked up nine goals and four assists in his last nine games for Manchester City.

And after proving last season that he is the man for the big occasion, by having a big influence in the quarter-final and semi-final games against Borussia Dortmund and Paris Saint-Germain, Mahrez has re-asserted his importance after being behind Gabriel Jesus in the pecking order at the beginning of the season.

He was unplayable at times in last night’s win at Sporting Lisbon, scoring the first – his 17th of the season – delivering the corner for Bernardo Silva’s fabulous second and then claiming another assist for Phil Foden.

He is one goal away from his career-best for a season – when Leicester won the title in 2015-16.

With City cruising at 5-0 with an hour gone, Guardiola was able to start looking ahead to Saturday’s game against Spurs, and keep the harmony in his squad, by sending on Ilkay Gundogan, Aleks Zincheko and Nathan Ake, all unlucky not to be in the team.

The size of the win also means that City can focus on the Manchester derby, three days before the second leg, without worrying too much about rotation.

The second leg gives Guardiola the option of giving more minutes to his understudy players, and possibly a youngster or two.

There were a fair few Benfica fans in the crowd at the Alvalade, enjoying the dominance of their graduates Ruben Dias, Bernardo Silva, Joao Cancelo and Ederson.

Cancelo diplomatically said before the game that the bitter rivalry between Sporting and his old club, their cross-town rivals, was not an issue as they were playing for City.

But the Portuguese contingent clearly enjoyed rubbing salt in the wounds.

Pedro Porro turned out for Sporting against the club that owns his registration after saying that Pep Guardiola has probably never heard of him.

Guardiola caustically answered that by saying there was no way he could keep track of the “250” players City have out on loan.

Porro’s inclusion evoked memories of Patrick Roberts playing for Celtic, and scoring, against City in a 1-1 Champions League draw at the Etihad.

Porro started well in the right wing-back position but the size of his task, if he fancies getting into the City team, was evident as his team were swamped and outclassed.

City racked up their biggest win in the Champions League proper – and more importantly, they took a clean sheet, their first of the competition this season.

Last season, their defensive meanness was a feature of the run to the final, as they conceded just one goal in tier first eight games.

The concession of ten in the group games was a concern for Guardiola, but the players were scrapping to keep Sporting blank in this one, as well as equaling their biggest European away win – they also beat Steaua Bucharest by the same scoreline in the play- off-round in 2016.