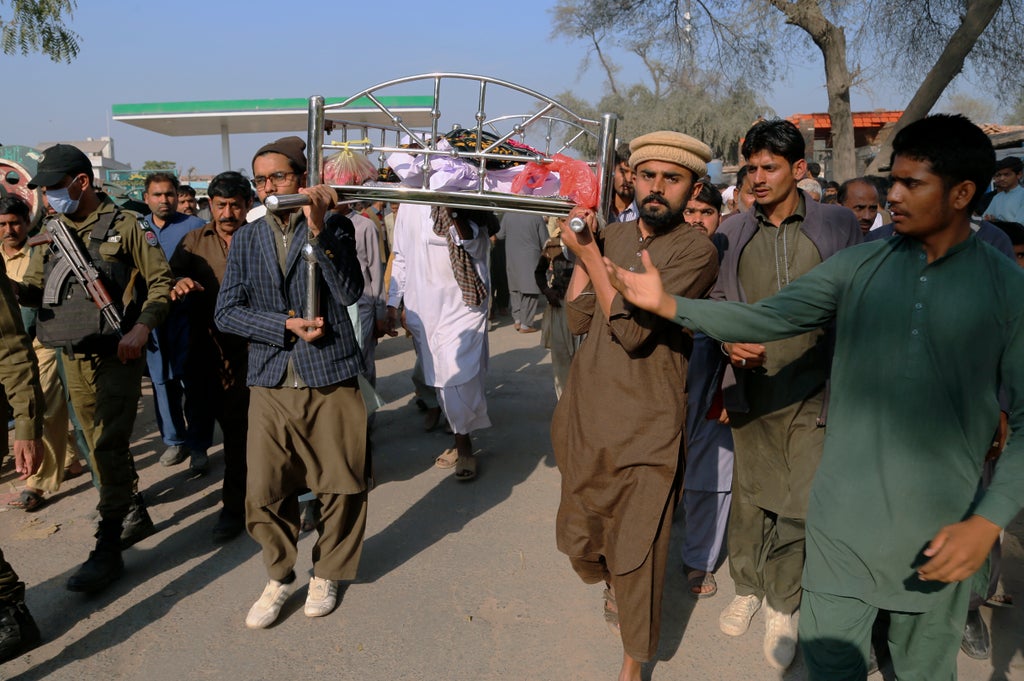 An enraged mob stoned to death a middle-aged man for allegedly desecrating the Quran in a remote village in eastern Pakistan, police said Sunday.

The custodian of a local mosque said he saw the man burning the Muslim holy book inside the mosque Saturday evening and told others before informing police, according to police spokesman Chaudhry Imran. The violence took place in a village in the district of Khanewal in Punjab province.

Imran said police rushed to the scene, where a man was found surrounded by an angry crowd. Officer Mohammad Iqbal and two subordinates tried to take custody of the man but the group began throwing stones at them, seriously injuring Iqbal and slightly injuring the other two officers.

Munawar Gujjar, chief of Tulamba police station, said he rushed reinforcements to the mosque but they did not arrive before the mob had stoned to death the man and hung his body from a tree.

Gujjar said the victim was identified as Mushtaq Ahmed, 41, of a nearby village.

“The ill-fated man has been mentally unstable for the last 15 years and according to his family often went missing from home for days begging and eating whatever he could find,” he said. He said the body was handed over to his family.

Mian Mohammad Ramzan, the mosque custodian, said he saw smoke inside the mosque, which is adjacent to his home, and rushed over to investigate. He found one Quran burned and saw a man attempting to burn another. He said people were starting to arrive for evening prayers as he was shouting for the man to stop.

Witnesses said a police team that reached the village before the stoning began took custody of a man but the mob snatched him away from them and beat the police as they tried to rescue him.

Later, more officers and constables reached the scene and took custody of the body, they said.

Gujjar, the area police chief, said investigators were scanning available videos to try to identify the assailants. He said police had so far detained about 80 men living in the mosque’s surroundings but that about 300 suspects took part.

Prime Minister Imran Khan expressed his anguish over the incident and said he was seeking a report from Punjab’s chief minister on the police handling of the case. He said they “failed in their duty.”

“We have zero tolerance for anyone taking the law into their own hands and mob lynching will be dealt with with the full severity of the law,” he said in a tweet hours after the incident.

Khan also asked the Punjab police chief for a report on the actions taken against perpetrators of the lynching.

The killing comes months after the lynching of a Sri Lankan manager of a sporting goods factory in Sialkot in Punjab province on Dec. 3 who was accused by workers of blasphemy.

Mob attacks on people accused of blasphemy are common in this conservative Islamic nation. International and national rights groups say blasphemy accusations have often been used to intimidate religious minorities and settle personal scores. Blasphemy is punishable by death in Pakistan.