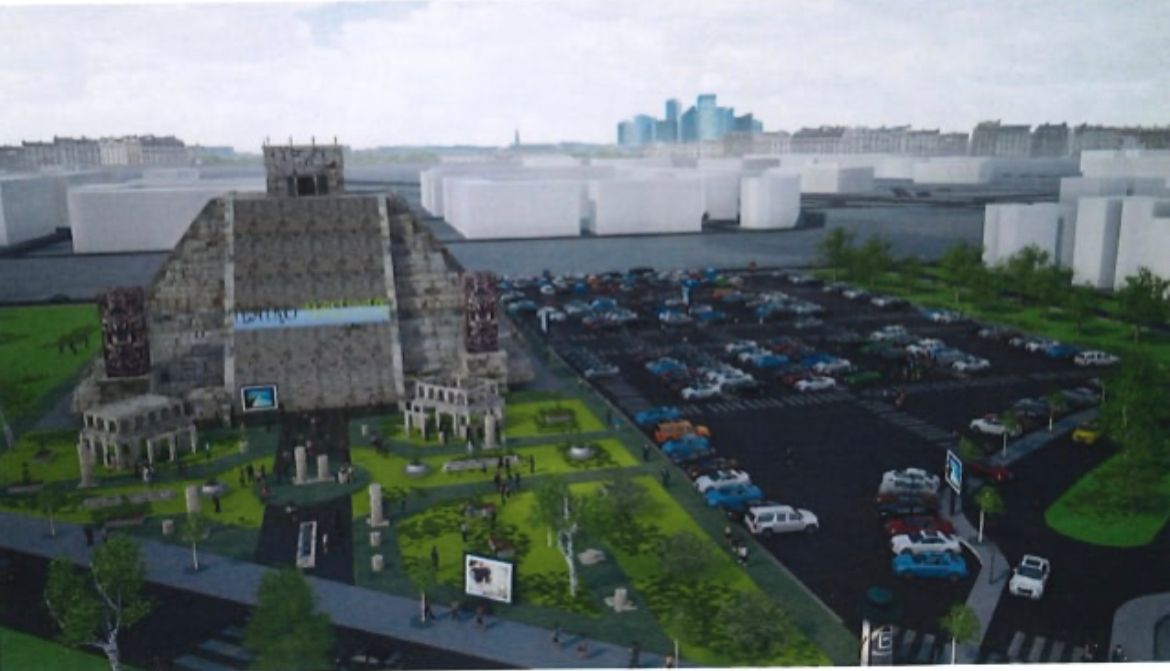 New script twist. On September 16, the residents of the Hortaleza district of the capital appeared on all the news and newspapers in Spain. Stunned, they did not believe the news advanced by the neighborhood newspaper Periódicohortaleza.org, which had the following headline: ‘An Aztec pyramid with theater and parking: this is Nacho Cano’s project in Hortaleza’. The news lifted the entire municipal corporation from their seats. The immense 10,000-square-meter vacant lot in the neighborhood was to be occupied by a gigantic 29-meter pyramid. Urban Planning sources assured then that it was a provisional use authorization for a maximum of four years, as established by law. The producer, they explained, would have to pay a fee to the City Council of the capital, which is the owner of the plot, of 450,000 euros per year. “After four years the authorization will end and it will be delivered again to the City Council in the same conditions in which the authorization was produced,” they stressed. Well.

Two months later, there will be no Aztec pyramid and there will be no festival in Hortaleza. Nacho Cano now plans to bring the festival to Ifema, according to sources familiar with the negotiations. The contract, according to the same sources, would already be well advanced. The idea of ​​the artist and his team is that the musical will begin in Ifema next spring. “That’s the idea, yes,” they assure their team. “Ifema offers many advantages”, they assure in the fair institution. In another document of October 1, to which this newspaper has had access, the City Council also notified the municipal group of Más Madrid that the project that the artist intended to take to Avenida de Machupichu, 42, in Hortaleza was going to be modified, without further details.

The theater of the also musician, producer and businessman will be called Malinche, in honor of the indigenous woman who accompanied Hernán Cortés from Extremadura during his conquest of the Aztec empire. Company sources assure that Cano has been working on this project for more than 10 years. In fact, Netflix has a documentary on its platform about the preparations.

The news then immediately went viral on social networks. The mayor of Más Madrid in Hortaleza, Miguel Montejo, asked the councilman of the City Council in the district, Alberto Serrano, of Ciudadanos, during a plenary session in the neighborhood. For two minutes, Serrano explained the following to the rest of the councilors in a relaxed tone. He said that nine months ago Nacho Cano’s environment contacted him, because they wanted to meet him. That the artist invited him to his house. “I was surprised that he was short, but he looked like Nacho Cano,” he said. “You, who are you?” Asked a man as he entered. “Come on,” they told him. And suddenly, three or four people appeared in a room: lawyers, artists … “What they told me is that Nacho is coming to lose money. He has been with this project for more than 10 years and is very excited. It will bring together great composers. The project looked very good. The idea was to project it on different continents in a row. They told me that they are also going to put Mexican food and my contribution is that they put Extremadura ham … and they thought it was good ”. When he finished, he said: “And I’m telling you, Nacho Cano came to me, but I’m more of Rosendo.” Two months later, there will be no project in Hortaleza. Everything indicates that it will be in Ifema.

The festival has been mired in controversy from the start. The relationship between the artist and the PP in Madrid is not new. Last New Year’s Eve he played at Puerta del Sol alone to pay tribute to the victims of covid-19. The mayor, José Luis Martínez-Almeida, then pointed out that it had no cost to the City Council’s coffers. Five months later, President Isabel Díaz Ayuso awarded him in the central building of Puerta del Sol the great Dos de Mayo cross, one of the most important distinctions in the region. At the event, and during a television broadcast controlled by the president’s team, Cano took off his medal and said: “People who vote for Podemos, Vox, everywhere, they have told me, ‘if you see the president , two words: thank you and brave. ‘ For being such a good president, you deserve the medal ”. The regional elections were two days away. Three months later, in August, the president spent a few days off at the artist’s house in Ibiza.

Two days after the announcement on the portal of the neighborhood newspaper, on September 18, Nacho Cano himself sent a 12-minute video to the Europa Press news agency, confirming that a pyramid was not going to be erected. “A structure was devised, which, due to sound and aesthetic issues, we thought was a good idea. All of that was projected before the pandemic and steel has risen a lot. Now it will be a structure, more like a tent, like the Cirque du Soleil. I want to clarify this, that they are giving me dizziness with that topic ”. Minutes earlier, he said that there was an “orchestrated campaign” against him, by Más Madrid and because of his relationship with President Ayuso. “Where is the problem? What tune is told to people? I have been doing this musical for 11 years. How can I not support Ayuso! If he kept the theaters open, he did the hospitals. If it had been from Podemos, I would have supported it. If in the eighties we made lesbian songs, “he said. “They attack me because I have supported Ayuso. I have supported a person who is worth, who knows it all the world ”.

To undertake this project, the musician has created a new society in Spain. It is called Malinche The Musical Spain SL, with its registered office at Calle de Fernando el Santo in Madrid, according to the commercial register. In addition to Cano, who is the main administrator, the company has three more: Alfonso Pereda Calvo, Pablo Alarcón Espinosa and David Hatchwell. Hatchwell was one of the entrepreneurs who convinced American mogul Sheldon Adelson to install the failed Eurovegas project in the region back in 2013.