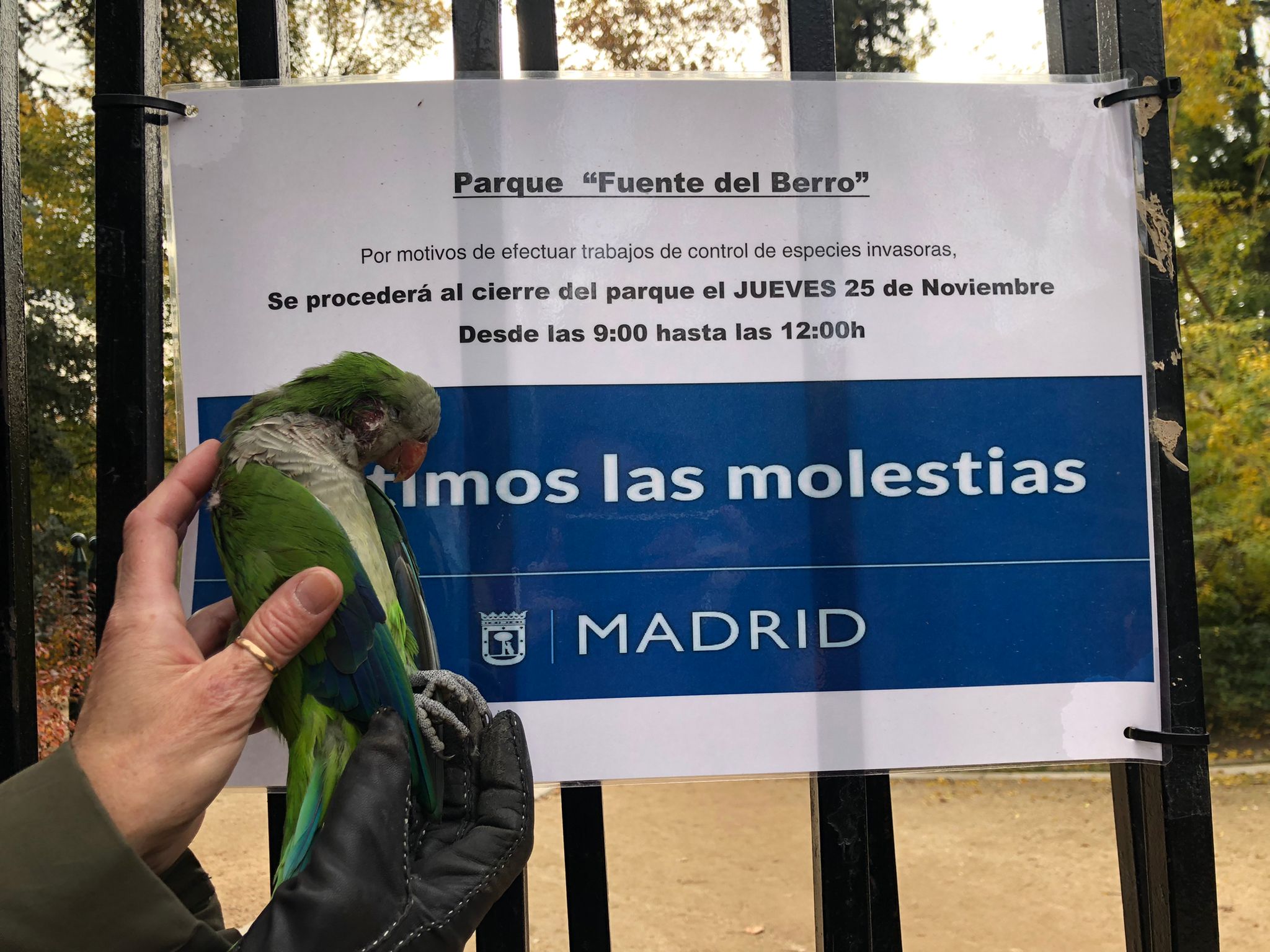 The parrots of Madrid, shot down. Despite the fact that the Madrid City Council announced two years ago that it would have to reduce the number of this invasive species and that it would do so in an ethical way, the neighbors were surprised this Thursday: two workers were going through the Parque de la Fuente del Berro, in the heart of the Salamanca district, throwing pellets of compressed air at the birds. Immediately afterwards, they approached the inert bodies that fell to the ground and guarded them so as not to leave them in sight. A woman has watched the scene in horror and has taken out her mobile to record a video that quickly began to run through WhatsApp groups and social networks. A sign at the entrance of the park announced that it would be closed from 9:00 a.m. to 12:00 p.m. “for reasons of invasive species control work.” It has not been enough for the neighbors to stay outside and not see the pellets. “Security measures have been bypassed,” laments the City Council.

The City Council has confirmed that it is “a collection action in the plan for exceptional situations” and that it adheres to the authorization of the Community of Madrid to reduce these invasive exotic birds. “The signed contract establishes the use of a compressed air rifle in specific circumstances and limited enclosures,” admitted a spokesman for the Environment area. The bulk of the operations have already been carried out, he explained, and will continue to be carried out in the city with the technique of the net-throwing cannon and the book net.

The question now is whether there are ethical methods to kill an invasive species. Miguel Ángel Hérnández, spokesperson for Ecologistas en Acción, is blunt: “Of course there are alternatives. Another thing is the discussion between economics and ethics ”. The technique of the net cannon and the net of books are precisely trapping methods that allow animals to be captured alive. “Then what is done with these species, such as those that are requisitioned at the airport, for example, is to take them to an animal care center so that they are in a restricted place until they die.” Apart from that, he explains, the simplest thing (if done with time) is to remove the nests from the trees or even the eggs, as is being done in other cities such as Barcelona. “It is important to deceive them by replacing those eggs with other infertile ones, so that they do not make a replacement and miss the breeding season,” analyzes Hernández, who admits that these animals “are quite intelligent and learn the danger zones.” Therefore, “shooting is not only ineffective, but it is also dangerous for people and an unnecessary violent method.” In addition, he insists, environmental groups have been warning for decades of the problem of letting them continue to reproduce and, “if they had listened to us,” they could have taken action on the matter without reaching this situation.

The Almeida government launched the plan to eliminate more than 11,000 specimens of Argentine parrots and Kramer that they estimated lived in the Madrid capital. The measure was announced in October 2019 to launch just 12 months later, that is, in October 2020, with a duration of 23 months and a cost of almost three million euros. When it was announced, the extermination of these birds was budgeted at just 100,000 euros, which meant a cost of between six and eight euros per parrot. Afterwards, the price rose to about 272 per head. Already then the most critical voices asked if they would end them with cannon shots.

Finally, the plan began last May under a contract with the companies Matinsa and Dypsa, which won the tender for the contest in February. The Animalista Party PACMA assures that it has been working for years to save the parrots from what it considers an “extermination plan”. In October 2019, before the announcement that the Consistory planned to exterminate 90% of the parrots in Madrid, the formation gave the Administration more than 30,000 signatures to demand the stoppage of the plan. The party met with Borja Carabante, delegate for the Environment, to present him with a veterinary and a legal report with a sterilization plan for the capital’s parrot populations. But they ignored it.

As it is an invasive exotic species, the captured specimens cannot be reintroduced to the natural environment, as explained in 2020 by the Environment area, so their destination was yes or yes “the sacrifice”. How were they going to do it? They did not announce it, since the City Council left the process in the hands of a successful bidder. What the Environment did ensure is that “the ethical euthanasia of animals” was going to be carried out “by methods that do not contravene the regulations on animal welfare.” “The winning company must establish a catch management plan,” he explained.

A year after those statements, PACMA asks Almeida himself for an explanation for the shooting, and the immediate application of ethical and non-harmful methods. which, as they recall, “have proven to be more effective and economical than extermination.”

These imported exotic birds are a serious problem, as they threaten native fauna such as sparrows. “They are not aggressive, but they compete for food and territory,” explains the spokesperson for Ecologistas en Acción. They also transmit disease to other birds or even humans; and their nests are considered a “risk to the integrity and life of people” because they weigh a lot – normal, between 40 and 50 kilos, but can reach 200. So far, only “large branches” have been broken by weight.

As announced by the City Council then, the districts with the most parrots are Carabanchel (2,547), Moncloa-Aravaca (2,298) and Latina (2,229). Between the three, on the west-southwest axis, they make up almost 54.5% of the Madrid population. They are installed in the trees of the pinaceae family (81%), mostly cedars and to a lesser extent pines, followed by deciduous trees (6%), especially bananas.

Half of the parrots in Spain live in Madrid

In the national SEO / BirdLife census in 2015, 18,980-21,455 parrot specimens were calculated throughout Spain. The communities with the largest population are Madrid, in the first place, followed by Catalonia, with 7,248-8,193 and 6,891-7,792 respectively. In the census carried out in 2019 in the municipality of Madrid, 4,408 nests were located and their population was estimated between 11,154 and 12,975 specimens, which would represent almost 50% of the national population according to the figure obtained at the state level.

The invasion has its origin in the fashion of the eighties and nineties to buy them as pets. In 2005, the EU banned the import of wild birds after detecting cases of avian flu and in 2013, the Spanish Government also banned the possession and sale of the two species of parrot, although the specimens came from captive breeding. But it was too late. Since 1986, the first year in which there are official records, until 2015, Spain legally imported more than one million parrots. Once on Spanish soil, the parrots learned to open their cages and escaped or were released by their owners. They live for 20 years in captivity and reproduce rapidly (between six and eight eggs a year).