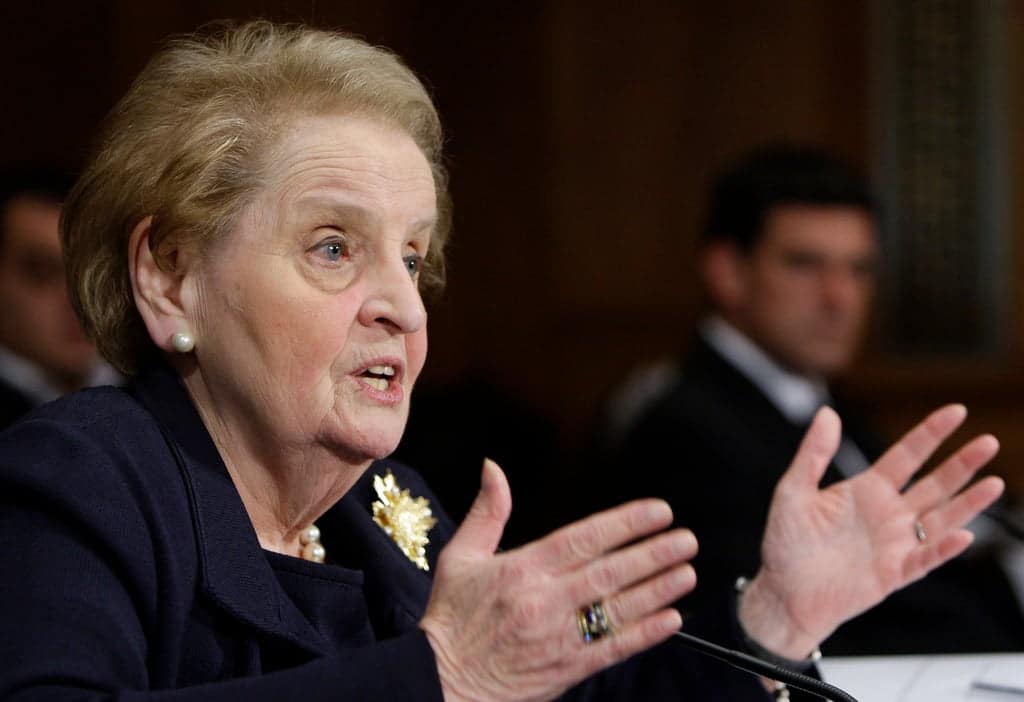 A month before her death at 84, Madeline Albright wrote that Russian President Vladimir Putin was making a “historic error.”

In an op-ed for New York Times published on 23 February, the day before the Russian invasion of Ukraine, Dr Albright wrote that “should he invade, it will be a historic error”.

Dr Albright served as the US Secretary of State between 1997 and 2001, the first woman to hold the post.

She wrote that she was the first senior US official to meet Mr Putin in his new role as acting president of Russia in early 2000.

“Sitting across a small table from him in the Kremlin, I was immediately struck by the contrast between Mr Putin and his bombastic predecessor, Boris Yeltsin,” she wrote.

“Putin is small and pale, so cold as to be almost reptilian,” she noted at the time.

“He claimed to understand why the Berlin Wall had to fall but had not expected the whole Soviet Union to collapse,” she added in the essay for the Times.

“Putin is embarrassed by what happened to his country and determined to restore its greatness,” she wrote after her first meeting with Mr Putin.

Ahead of the invasion, Dr Albright said she had been “reminded in recent months of that nearly three-hour session with Mr Putin as he has massed troops on the border with neighboring Ukraine”.

In a speech, Mr Putin claimed that Ukrainian statehood wasn’t real and he recognized the independence of two breakaway republics in the east where Russia-backed separatists have been fighting Ukrainian forces since 2014.

See also  Is this how things end for Aaron Rodgers? Why what if and a 'beautiful mystery' persist for the Green Bay Packers?

“Mr Putin’s revisionist and absurd assertion that Ukraine was ‘entirely created by Russia’ and effectively robbed from the Russian empire is fully in keeping with his warped worldview. Most disturbing to me: It was his attempt by him to establish the pretext for a full-scale invasion, ”Dr Albright wrote last month.

“In the 20-odd years since we met, Mr Putin has charted his course by ditching democratic development for Stalin’s playbook,” she added. “He has collected political and economic power for himself — co-opting or crushing potential competition — while pushing to re-establish a sphere of Russian dominance through parts of the former Soviet Union.”

Dr Albright said Mr Putin sees his own wellbeing as the same as that of the country, and any opposition to him is therefore treasonous.

“He is sure that Americans mirror both his cynicism and his lust for power and that in a world where everyone lies, he is under no obligation to tell the truth,” Dr Albright wrote. “Because he believes that the United States dominates its own region by force, he thinks Russia has the same right.”

She predicted that “invading Ukraine would ensure Mr Putin’s infamy by leaving his country diplomatically isolated, economically crippled and strategically vulnerable in the face of a stronger, more united Western alliance” and that “what is sure to be a bloody and catastrophic war will drain Russian resources and cost Russian lives” as well as create “an urgent incentive for Europe to slash its dangerous reliance on Russian energy”.

Nato would “significantly reinforce its eastern flank and to consider permanently stationing forces in the Baltic States, Poland and Romania”, she suggested.

She also accurately predicted that an invasion “would generate fierce Ukrainian armed resistance, with strong support from the West”, and she suggested that the conflict would be “far from a repeat of Russia’s annexation of Crimea in 2014” but instead “would be a scenario reminiscent of the Soviet Union’s ill-fated occupation of Afghanistan in the 1980s”.

She said Mr Putin would “never admit to making a mistake” but that “he has shown that he can be both patient and pragmatic”.

Dr Albright added that Mr Putin is aware that the “current confrontation has left him even more dependent on China” and that “he knows that Russia cannot prosper without some ties to the West”.

“Sure, I like Chinese food. It’s fun to use chopsticks,” Mr Putin told her in their first meeting, according to Dr Albright. “But this is just trivial stuff. It’s not our mentality, which is European. Russia has to be firmly part of the West.”

“Mr Putin must know that a second Cold War would not necessarily go well for Russia, even with its nuclear weapons,” Dr Albright wrote.

“Ukraine is entitled to its sovereignty, no matter who its neighbors happen to be. In the modern era, great countries accept that, and so must Mr Putin,” she added.