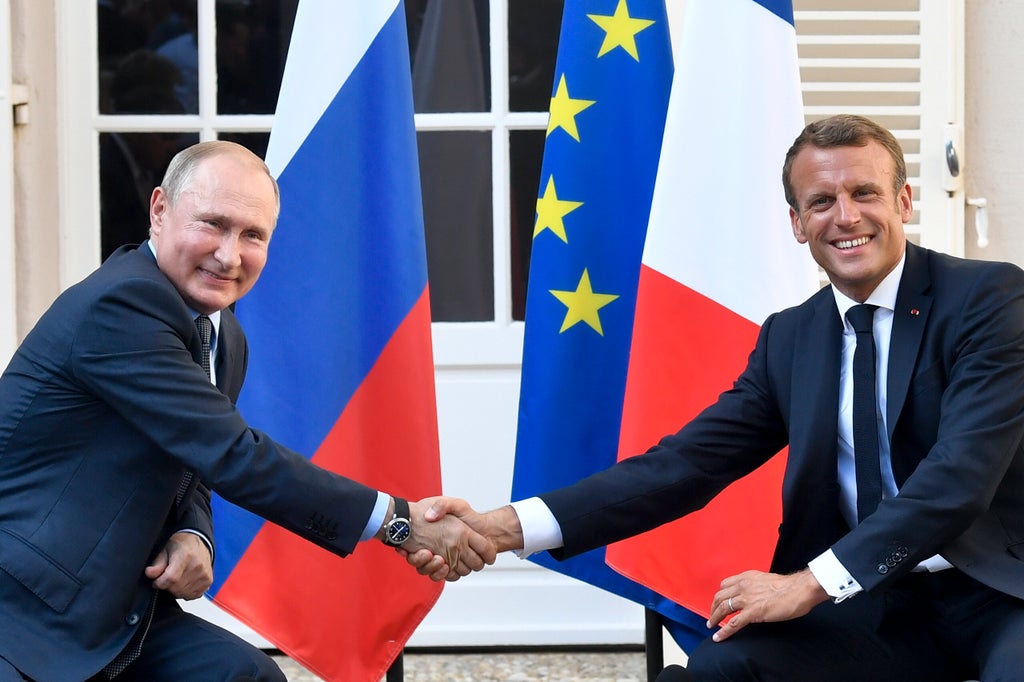 French President Emmanuel Macron will hold talks in Moscow on Monday in a bid to help defuse the tense situation around Ukraine.

The concentration of some 100,000 Russian troops near Ukraine has fueled Western concerns that it heralds a possible offensive. Russia has denied any plans to attack its neighbor but is urging the United States and its allies to prevent Ukraine and other former Soviet nations from joining NATO, stop deploying weapons there and push back NATO forces in Eastern Europe. Washington and NATO have rejected the demands.

Macron, who will meet Russian President Vladimir Putin in the Kremlin before visiting Ukraine on Tuesday, said last week that his priority is “dialogue with Russia and de-escalation.”

Before heading to Moscow, Macron had a call on Sunday with US President Joe Biden. They discussed “ongoing diplomatic and deterrence efforts in response to Russia’s continued military buildup on Ukraine’s borders, and affirmed their support for Ukraine’s sovereignty and territorial integrity,” the White House said in a statement.

In 2015, France and Germany helped broker a peace deal for eastern Ukraine in a bid to end hostilities between Ukrainian forces and Russian-backed separatists that erupted the year before following Russia’s annexation of the Ukrainian peninsula. from Crimea.

The agreement signed in the Belarusian capital Minsk helped stop large-scale clashes, but efforts to reach a political settlement stalled and frequent skirmishes continued along the tense line of contact in the eastern industrial heartland. of Ukraine called Donbas.

The leaders of Russia, Ukraine, France and Germany last met in Paris in December 2019 at the so-called Normandy-format summit, but failed to resolve major contentious issues.

Amid tensions over the Russian military buildup, presidential advisers from the four countries held talks in Paris on Jan. 26 but failed to make any visible progress and agreed to meet again in Berlin in two weeks.

Ukrainian President Volodymyr Zelenskyy has pushed for another four-party summit in Normandy, but the Kremlin said a leaders’ meeting would only make sense if the sides agree on next steps to give special status to the rebellious east.

Putin and his officials have urged France, Germany and other Western allies to encourage Ukraine to fulfill its obligations under the 2015 deal, which provides broad autonomy for the rogue east and broad amnesty for separatists. The deal stipulates that only after those conditions are met will Ukraine be able to restore control of its border with Russia in the rebellious regions.

Many in Ukraine saw the Minsk agreement as a betrayal of national interests and its implementation has stalled. Amid the latest tensions, Ukrainian authorities have strongly warned the West not to pressure Ukraine to implement the deal.

Last week, Oleksiy Danilov, secretary of Ukraine’s National Security and Defense Council, told The Associated Press that an attempt by Ukraine to comply with the Minsk agreement could trigger internal unrest that would benefit Moscow.

Ukrainian Foreign Minister Dmytro Kuleba said Moscow wants the rebellious regions to reintegrate into Ukraine to use them to effectively block the country’s pro-Western aspirations, vowing “this is not going to happen.”

See also  The best pub in every Greater Manchester borough, according to Tripadvisor and Google ratings