Skip to content
Home News Lurpak at £9.35 a tub, no pet food in Tesco: Congratulations Leavers, you’ve got the Brexit you always wanted! 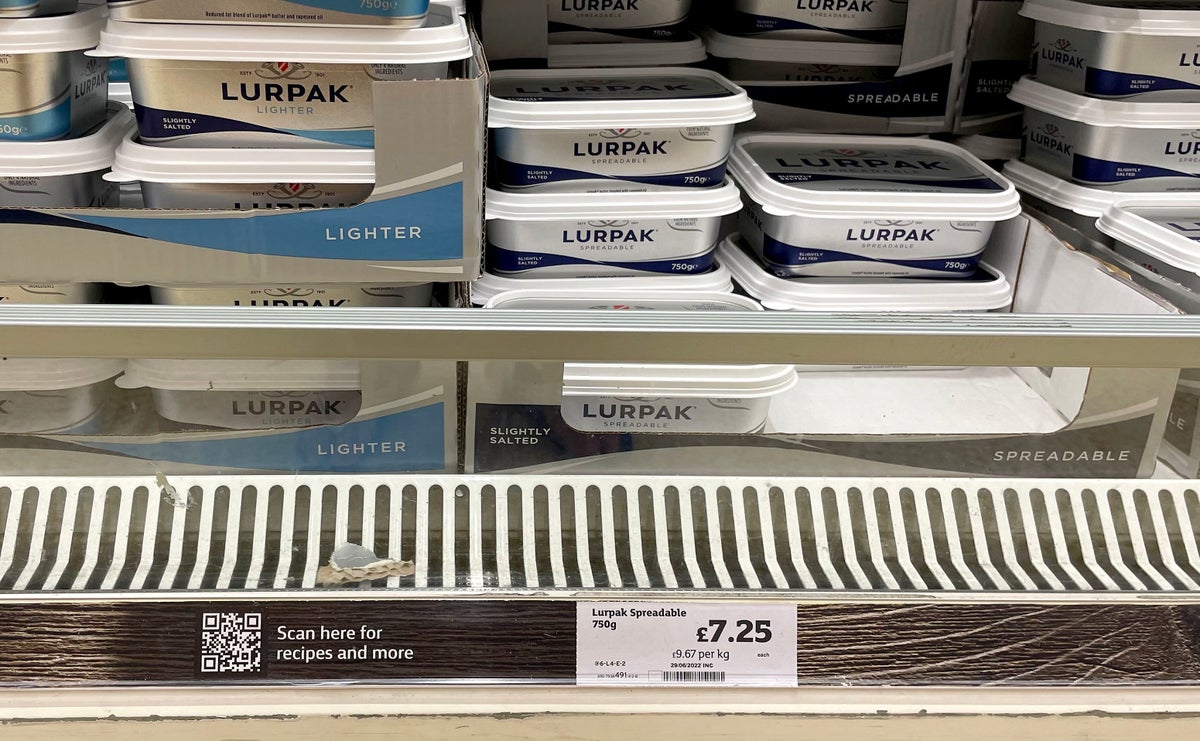 For all the bakers and buttery toast fans out there, I regret to inform you that there is bad news. Lurpak, king of butters, has been spotted priced at £9.35 for a one kilo pack in Iceland, and selling in Sainsburys (online and in store) for £7.25 for a 750g tub.

Pet owners beware, too, as the US owner of Whiskas, Dreamies and Pedigree, Mars, has halted supplies to Tesco in another row over price rises. Tesco still hasn’t sorted out a dispute with ketchup and baked bean supreme Heinz (don’t come at me with your Branston beans, thanks), which also pressed pause this week on supplying the supermarket due to price hikes.

The UK is facing the highest inflation in 40 years. I’m not an economist, I’ll admit that right off the bat – I generally leave the global market trends to my esteemed colleague Hamish McRae. But it’s clear even to a layperson that something is very wrong here, and we’re paying the seriously inflated price for it.

This is not some sort of Remoaner conspiracy, constructed to sow discord and fear in otherwise balmy, halcyon days for our green and pleasant land. It should be abundantly clear now that Brexit has not provided the much-lauded benefits some believed it would – and has instead gifted us some very tangible and concrete disadvantages, reflected in our supermarket shopping baskets, and turned us into a laughing stock abroad.

The ONS has confirmed that inflation in Britain rose by 9.1 per cent in the 12 months to May. Other European countries are experiencing cost of living crises to varying degrees, but we are the outlier in the G7, the sick man of Europe. And we did it to ourselves in a bizarre act of national self-harm.

Brexit has directly impacted UK levels of inflation, due to immigration controls and supply chain shortages. Citigroup, Standard Bank and Bank of America reckon this means we’ll see higher inflation for years to come. The London School of Economics released a report in April outlining how new trade barriers have driven a 6 per cent increase in our food prices.

The Tories, those architects of Brexit, are busy imploding, with the resignation of former chancellor Rishi Sunak and former health secretary Sajid Javid pushing Boris Johnson’s chaotic administration closer to the brink. But even the supposed opposition are able to grow a backbone on the issue of Brexit.

Keir Starmer said on Monday that the “UK will not go back into the EU” under a Labor government, will not join a customs union, and will not restore freedom of movement. According to Starmer, in a particularly laughable example of prevarication, there’s no case for Britain to rejoin the EU.

If there’s one thing Starmer’s really good at, it’s alienating voters, especially the ones Labor should be giving a voice to. Workers facing real-terms pay cuts, anyone vaguely left-wing, and now Remainers – and we’re left asking Starmer what he stands for (certainly not the 10 pledges he was elected party leader on).

So now Brexit has come for Lurpak, and it’s not going to end there – price hikes across food, petrol, energy and rent, combined with wages that aren’t keeping pace with inflation spell misery ahead for all of us. Except, of course, if you’re an MP and you’ve been awarded a £2,200 annual pay rise.

The promises on the side of a bus, the xenophobic rhetoric about “taking back control” – it worked, and now the chickens are coming home to roost. By the way, the price of chicken is soaring, with the British Poultry Council citing “ongoing Brexit pressures” as the reason.