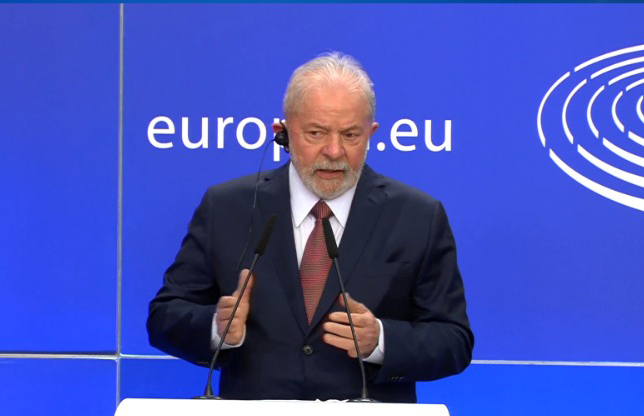 He is not yet a candidate for the presidency of Brazil and, in fact, he denies being in the campaign. But the former Brazilian president Luis Inácio Lula da Silva, a leader in the polls, has taken advantage of his visit to the community capital to outline a proposal for a presidential election to be held in the Latin American giant in the fall of 2022 or, at least, to rehearse a slogan . “We want the poor to be in the budget and the rich to pay taxes,” he declared in the European Parliament in a joint appearance with Iratxe García, the president of the European socialist group. Nor has he missed the opportunity to charge against the current Brazilian president, Jair Bolsonaro. “Represents a piece of the extreme right fascist”, has attacked without hot cloths.

With a very energetic verb, who was president of Brazil between 2003 and 2011 has defended his management. “We put an end to hunger, the UN recognized it. We created 22 million jobs ”, has wielded the former president, 76 years old recently. He then turned his darts against Bolsonaro: “The extreme right does not think about the people, the Indian, the black. He does not know how to govern. They sell, as they are doing with Petrobras and want to do with public banks ”.

Lula was attending an act in the European Parliament on Monday in which he coincided with the former Spanish socialist president José Luis Rodríguez Zapatero. “We have the objective of sharing the agendas of the left in Latin America and Europe. And we have to face the populisms of the right and the extreme right, ”said the leader of the European Social Democrats, the Spanish Iratxe García, who on the upcoming presidential elections in Brazil has indicated that they will support the Workers Party (PT), Lula’s.

Since he got out of jail two years ago – for cases later canceled – shortly before the pandemic exploded, the possibility that Lula will run again in a presidential election in Brazil wins whole. In fact, he leads the polls in a climate of polarization. “I am prepared, motivated and in full health,” he wielded. But he doesn’t take the step of admitting it openly. Although his story seems that of who wants to be a candidate, he measures his time and respects the deadlines of his political organization. “We are in a very special moment in Brazilian politics. My party is attacked every day ”, he pointed out. “But my party is going to have a candidate in February or March, and we also have to see if we are going in a coalition,” continued the former unionist, who has already run for the highest office in Brasilia on five previous occasions, losing in the first three .

Asked if both these words and his tour of Europe these days – he has arrived in Brussels from Berlin, where he has met the likely next chancellor, Olaf Scholz – and his meetings with expatriate Brazilians were campaign-related, he denied: “ I do not understand that I made a campaign speech. I thank the compatriots who have dedicated their solidarity to me [en referencia a su paso por la cárcel]. It will be a campaign speech, when there is a campaign and you ask for the vote. When it is decided that I am going to be a candidate, I will make a speech as a candidate ”.