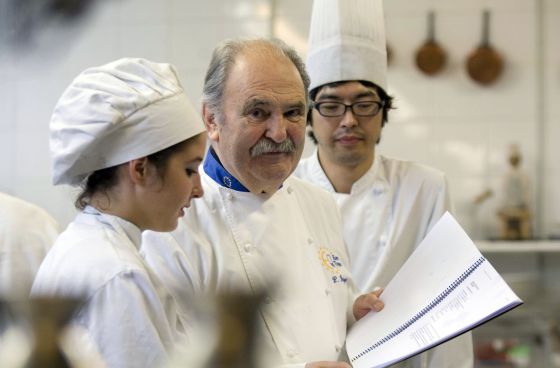 At an unspecified time in the morning, he would appear each day in the kitchen to supervise the work and greet the brigade. “The boss, the boss”, we warned each other in a low voice so that everything was in order at his entrance. The Boss, with a capital letter and always yours, was Luis Irizar, and that’s what those of us who were lucky enough to be his pupils call him.

Last Thursday, the news of his death at the age of 91 in San Sebastián lit a long fuse of reactions in the world of gastronomy. It was not be for lowerly. Not only because of his long career as a chef, hotel manager and trainer, but because of his enormous humanity: Irizar was very good people.

If we looked at his immense career through the eyes of this 21st century in which chefs are the new rock stars, we would recognize him as a true phenomenon. But this son of the Buenavista de Igeldo San Sebastian farmhouse developed his professional career far from the spotlight, as the decades of the fifties to the nineties dictated.

Educated for several years in Gipuzkoan seminars, he began to work as a marmitón and an apprentice at the María Cristina hotel in San Sebastián. There, among the charcoal stoves, he discovered a taste for the profession. As a good restless ass, as defined in his book Master of masters (Abalon Books), was linking destinations that led him to the Jockey restaurant in Madrid, Monte Igueldo in San Sebastián, the Carlton in Biarritz and the California and Royal Monceau hotels in Paris.

In 1958, he traveled to London to work in a Spanish restaurant, and was hired in 1963 at the Hilton Hotel as second chef, soon rising to first chef. This stage was very important for Irizar, as it was at the Hilton where it took good note of the operation of a hotel company and gained teaching experience with the start-up of the establishment’s apprenticeship training center, two fields that, years later, would turn out to be keys in your career.

Back in Euskadi, with his life partner, Virginia Alzugaray, he opened the La Central restaurant, bar and hotel, in the Guipuzcoan town of Lasarte. The leap to hotel management was served. At the beginning of 1966, he was offered the general management of the Euromar hotel in Zarautz. There he also served as the head of the kitchen and welcomed the promoters’ idea of ​​promoting a cooking school within their facilities with enthusiasm.

The Euromar school was an ephemeral project, but of great importance in Basque cuisine. There, great professionals such as Karlos Arguiñano, Ramón Roteta or Pedro Subijana were trained. Luis Irizar thus became the reference in training for chefs, teacher of teachers and father of New Basque Cuisine.

After Euromar, he started the Alcalá hotel in Madrid, again as hotel manager and chef de cuisine of his Basque restaurant, a reference for years for businessmen and politicians who passed through the capital. He lived there for 20 years, combining for a time the tasks in the hotel establishment with the management of the Gurutze Berri restaurant, in Oiartzun. In 1975, six years after its opening, it received, together with Xabier Zapirain, a Michelin star. He would repeat the award years later, in 1980 for his work at his restaurant Irizar Jatetxea.

After the Madrid stage, he returned to San Sebastián to complete an idea that had been around his head since his time at the Hilton: to open his own school. In the 1992-93 academic year, the Luis Irizar Cooking School was already a reality.

He cooked for aristocrats, politicians, millionaires and heads of state, worked in spectacular banquets unimaginable today, but said that to entertain him you only needed a glass of wine and a plate of cheese.

He was a man proud of his family, the blood family and the one he formed with his students and disciples with whom he always maintained an extraordinary loving relationship.