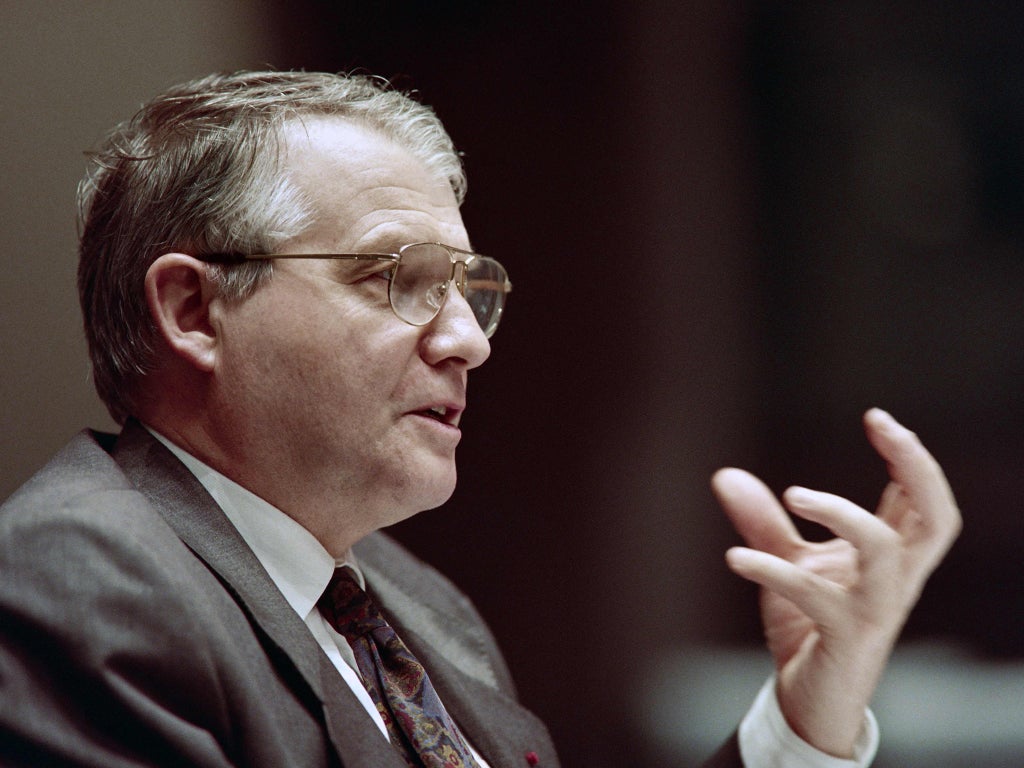 Soon after reports of a mysterious new disease began circulating in the early 1980s, describing predominantly gay patients with compromised immune systems and rare forms of cancer and pneumonia, Luc Montagnier began working to find the cause.

The French virologist, who has died aged 89, was a senior researcher at the Pasteur Institute in Paris, where he directed a unit that focused on retroviruses, a group of insidious microbes that multiply by splicing their genetic material into a host cell’s genome. Like many of his colleagues, he suspected that one such virus was the culprit.

When he and others at the institute examined a sample in January 1983, taken from a fashion designer who exhibited early signs of the disease, they were surprised to find what appeared to be an entirely new kind of retrovirus. It was unusually potent, lying hidden in white blood cells before flaring up, replicating and killing the cells that had enabled it to grow.

Montagnier’s lab had discovered HIV, the drug-resistant virus that was later found to cause Aids. Originally labeled a “gay plague”, the disease ballooned into a public health crisis. Ultimately, the work done by Montagnier and his colleagues paved the way for an HIV blood test, spurred the development of Aids drugs and therapies, and earned the two Pasteur scientists a share of the Nobel prize in physiology or medicine in 2008.

Much to Montagnier’s dismay, his findings also plunged him into a decade-long battle for scientific glory, national pride and millions of dollars in blood-test patent royalties, as he and an American team led by National Cancer Institute researcher Robert C Gallo vied over who discovered what, and when.

Following allegations of scientific misconduct, self-serving behavior and outright theft, the dispute was formally resolved only with help from the US president, Ronald Reagan, and the French prime minister, Jacques Chirac, with both sides claiming a share of the credit.

While Gallo was long cited as a key leader in HIV research, credited with definitively linking the microbe to Aids, the Nobel committee sought to honor the “discoverers” of the virus in awarding the prize to Montagnier and Françoise Barré-Sinoussi.

The saga cast a long shadow over one of the great success stories in modern science: the transformation of Aids from a death sentence into a treatable chronic illness, in a matter of years rather than decades.

The Nobel committee announced in 2008 that half of the medicine prize would be shared between Montagnier and Barré-Sinoussi.

“Never before has science and medicine been so quick to discover, identify the origin and provide treatment for a new disease entity,” the committee said. “Successful antiretroviral therapy results in life expectancies for persons with HIV infection now reaching levels similar to those of uninfected people.”

At the time of the announcement, more than 25 million people had died of Aids-related illnesses, and an estimated 33 million more were living with HIV.

Human retroviruses were largely written off as a fantasy until 1980, one year before Aids was first reported in the US, when Gallo identified a leukemia-causing virus he called HTLV. By the time he started examining reports of Aids, he had found a second form of the HTLV virus and began to suspect that the new disease was caused by a third.

Montagnier’s research pointed towards a cause that was unrelated to HTLV. He published his lab’s initial findings in 1983, giving a basic description of the microbe he called lymphadenopathy associated virus (LAV). Its role in Aids, wrote Montagnier and his colleagues, “remains to be determined”.

The article received little attention. But four months later, when Montagnier described his work at a conference of top virologists in New York, the Pasteur Institute had mounting evidence that the virus was indeed the cause of Aids. Montagnier was reportedly met with derision during a question-and-answer session.

The institute’s work began to gain broad acceptance only in April 1984, when Margaret Heckler, the US secretary of health and human services, announced in a news conference that “the probable cause of Aids has been found” – not by Montagnier, but by Gallo and his lab, which called the virus HTLV-3. There was a chance, Gallo noted at the time, that his virus was the same as the one isolated at the Pasteur Institute.

It soon became clear that LAV, HTLV-3 and a third virus – subsequently isolated by the researcher Jay Levy – were variants of the same microbe. Jousting over precedence and priority began almost immediately, with Gallo claiming that he had isolated the virus without relying on help from the French. He said he had gone far beyond their research by establishing the virus’s link to Aids and detailing its structure and development.

Genetic testing showed a striking similarity between the microbes isolated by Montagnier and Gallo. The viruses they relied on for their research appeared to be identical, or at least taken from the same source.

In fact, Montagnier had sent samples of his virus to the Gallo lab, as he had to other researchers who inquired about LAV. While Gallo insisted that his work was entirely his own, some scientists speculated that the National Cancer Institute’s cells had been contaminated by the samples from Pasteur.

The controversy led to a lawsuit over the HIV blood test, a crucial diagnostic tool that would help slow the virus’s spread – and would earn millions of dollars in royalties for whichever lab held the patent.

Although the Pasteur Institute filed for a US patent on the day of the 1983 conference, the patent was awarded to Gallo’s team, which filed more than a year later, in May 1985. That December, the Pasteur Institute sued the US government, alleging that the Gallo test had been made using the French virus.

The dispute seemed to have come to an end in 1987, after Reagan and Chirac announced an agreement in which royalties from the blood test were split between France and the US, and the two scientists agreed to describe themselves as “co-discoverers” of HIV .

Montagnier and Gallo publicly reconciled, and journalists and scientists speculated that a Nobel prize was imminent. Along with Myron “Max” Essex, one of the first researchers to suggest that Aids might be caused by a retrovirus, the two scientists shared a 1986 Lasker Award for clinical medical research.

However, questions regarding the discovery of HIV resurfaced in 1989, when the Chicago Tribune published a 50,000-word article by the investigative reporter John Crewdson, who suggested that Gallo had either stolen the virus from the French or taken it inadvertently as part of a years-long pattern of shoddy research and potential scientific misconduct.

The reporting spurred investigations by the National Institutes of Health and the Department of Health and Human Services, which examined Gallo’s lab records and interviewed scores of his colleagues as part of what Washington Post described as “the longest-running and most heavily publicized fraud controversy in the history of American science.”

By the time it was over, both Montagnier and Gallo declared that they had been vindicated. The US Office of Research Integrity found Gallo guilty of scientific misconduct before his appeals board dropped the charges in 1993. During the proceedings, Gallo acknowledged that his viruses had probably been contaminated by samples from the Pasteur Institute.

As a result, the French-American blood-test agreement was tweaked in 199 so that the French received a bigger share of royalties from the sale of test kits. “It’s the end of a bad story,” Montagnier told Washington Postadding that he remained focused on his research into HIV/Aids, which remains uncured.

Luc Antoine Montagnier was born on 18 August 1932. He grew up near Poitiers, where his mother was a seamstress and theater usher, and his father, who suffered from chronic enterocolitis and injuries in his heart, was an accountant.

Montagnier studied science and medicine at the University of Poitiers, receiving a bachelor’s degree in 1953, and completed his medical studies in Paris, where he earned a doctorate at the Sorbonne in 1960.

He joined the Pasteur Institute in 1972 and was the founding director of its viral oncology unit until 2000, when he became a professor emeritus. From 1974 to 1998 he was also the director of research at the French National Center for Scientific Research.

Montagnier was appointed the head of a proposed $30m Aids research center at Queens College in New York in 1997, but the research effort failed to attract sufficient financing and closed.

He married Dorothea Ackerman in 1961 and had three children, Jean-Luc, Anne-Marie and Francine. Information on survivors was not immediately available.

In 1986, Montagnier and his lab announced the discovery of a second type of HIV, concentrated in patients in West Africa. He went on to establish biotechnology companies focused on developing a cure for Aids, and in 1993 he co-founded the World Foundation for Aids Research and Prevention, a Unesco-affiliated organization based in Paris.

However, Montagnier’s reputation suffered as he threw his weight behind increasingly unlikely theories, surprising some colleagues when he asserted that HIV causes Aids only by combining with another microbe, mycoplasma. He later backed ideas that were widely derived as pseudoscience, appearing at an autism conference alongside the actor Jenny McCarthy to declare that the developmental disorder could be cured with antibiotics.

More recently, he opposed mandatory vaccinations in France and claimed that the coronavirus was man-made, created as part of developing a potential HIV vaccine.