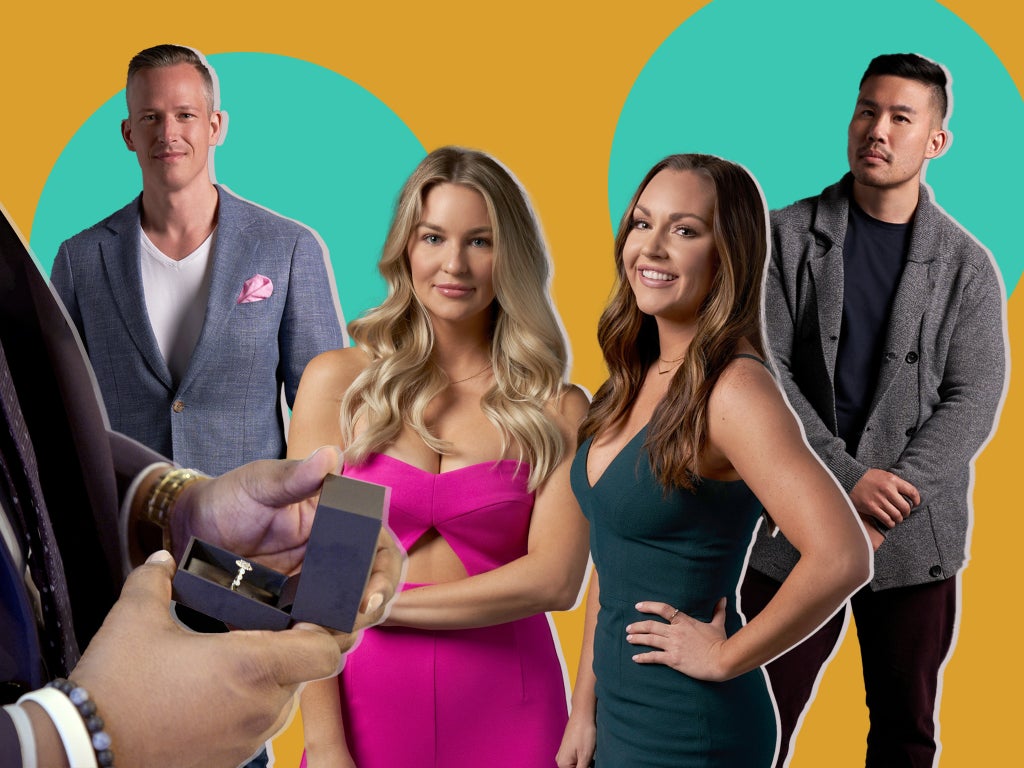 When love is blind launched on Netflix in 2020, its near-instant success meant that a second season was a no brainer. Audiences across the globe were gripped, watching as 30 single men and women tried to fall in love with a stranger before seeing them for the first time. The show’s premise lies in discovering whether emotional bonds made through hours of sightless conversation can prevail over physical attraction, as the couples only get the chance to meet in person once they’ve decided to marry.

As far as reality dating shows go, it’s one that exists on the stranger end of the scale: a glossy hybrid of Blind Date, First Dates and Married at First Sight. But as the 2020 run of the show played out, it became clear that there wasn’t really that much risk involved at all: if everyone’s stereotypically beautiful, one wonders, then of course love can be blind. Each couple that made it to the engagement and honeymoon stage ended up being physically attracted to one other. Great news for them, sure, but it made for less of a meaningful viewing experience for the viewer. Where’s the tension, or the true sense of testing boundaries if all contestants end up matching with someone who is essentially their “type”?

Preference and prejudice mean that there are some who are more likely to feel like they’re drowning in the dating pool; fat bodies, for example, face fetishisation or rejection, while disabled daters can face condescension and ableism when attempting to find companionship. With no representation of people who’d fit into these categories, season one missed a chance to see if the formula worked for people whose physical forms aren’t as widely celebrated as others.

At first glance, season two seems to be aware of the toothlessness of its debut run by casting people who admit to previously facing adversity when it comes to finding love. The very first words heard on season two are from business owner Chassidy, a curvy woman who admits that her physical insecurities have stood in the way of her being a successful dater in the past. Yet, as a contestant on love is blindshe is optimistic that the process will give her a chance to connect without possible prejudice: “This experiment allows me to be judged for who I am as a person, versus the physical.”

Another contestant, aptly named sales manager Hope, is also bigger than the majority of the other female contestants and states her faith in the concept of the programme’s “personality first” mantra. “It doesn’t matter what I look like – how much I weigh,” she says. “It is who you are inside.”

It soon becomes clear how useful an idea like this can be when we meet the likes of Abishek, a vet who moonlights as a house DJ. He tries to get around the point of the show with unsubtle attempts to suss out the physical make-up of his dates: he states he “gets along best with people who work out” as well as plainly asking what size dress a woman would wear if he were to buy her a dress. A particularly memorable prerequisite of a potential dating partner of his is that he should be able to carry them on his shoulders at a music festival.

As grim as it is to witness, moments like these expose elements of the shallow realities that exist in real world dating and how singularly focused people can be on purely physical attributes. But sadly, where it has the opportunity to dig into some of these prejudices further, love is blind‘s exploration of body diversity stops there. Everyone but Chassidy and Hope have slim to muscular figures, and all are able-bodied (as far as early episodes disclose).

One female experiment reveals that she used to be 70lbs (32kg) heavier, and still sees a “fat girl” when she looks in the mirror, despite this not being the case. Though she panics about whether she’d be accepted in person by the man she’s had the strongest connection to her, her fears of her go unfounded when she eventually meets him. While her vulnerability de ella, as well as that of others who share that they were “chunky” as children, is welcome and refreshing, it makes you wonder just what might have happened if she’d made this connection before losing any weight at all . Where the show had the opportunity to be more inclusive with its display of who is worthy of finding love, it chooses to maintain the status quo.

This is not to say that fatter or visibly disabled contestants should be used as tokens, or “gotcha” devices, chosen only to provide a shocking reveal moment fit for social media. Yet, by filling the field of contestants mostly with people who’ve faced little or limited experiences with physical desirability, love is blind once again sells itself short of what the experiment could really achieve.

Another season of the show has already been commissioned, so perhaps it’ll be third time lucky for producers to cast their net wider and prove to us that love really can be blind.