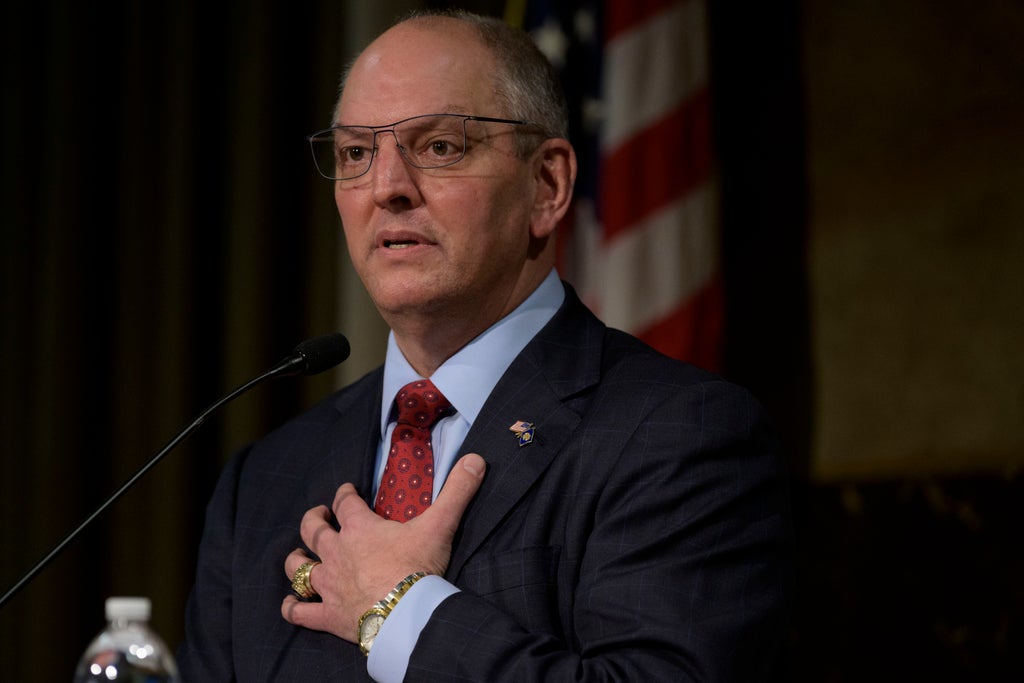 Louisiana Gov. John Bel Edwards defiantly denied Tuesday that he delayed or interfered with investigations into the deadly 2019 arrest of Ronald Greene — and for the first time he characterized the actions of the troopers seen on stunning video, punching and dragging the Black man as racist.

“I can’t imagine if Mr. Greene had been white he would have been treated that way,” an emotional Edwards told a news conference. “I think we have to acknowledge racism when we see it. We have to call it what it is.”

The Democratic governor rejected the idea that his response to the Greene case was driven by a tight reelection campaign that depended heavily on the Black vote. He said that notion is nonsensitive because prosecutors had the Greene case well before his election.

“Nothing like that has ever happened because of me,” he said. “That is not who I am as a person.”

Edwards’ remarks were the first since an Associated Press report last week that showed he had been notified within hours of Greene’s death that troopers engaged in a “violent, lengthy struggle,” yet he kept quiet for two years as police told a much different story to the victim’s family and in official reports: that Greene died from a crash following a high-speed chase.

Edwards remained mostly silent on the case until last May when the AP obtained and published long-withheld body camera video showing what really happened: white troopers jolting Greene with stun guns, punching him in the face and dragging him by his ankle shackles as he pleaded for mercy and wailed, “I’m your brother! I’m scared! I’m scared!”

The governor’s news conference came just minutes after a heated, closed-door meeting with the Legislative Black Caucus that at times erupted with members cursing over his muted response to Greene’s deadly arrest.

Some caucus members asked why Edwards did not speak out or follow up more forcefully when informed of the circumstances.

“A man died in custody. You don’t ask his name. You don’t ask what happened? You don’t get any facts?” one of the caucus members said, according to audio of the meeting obtained by the AP.

“This matter will not go away until there is an acknowledgment that there was a cover-up,” said another.

Edwards at one point said, “I am not going to tell you everything that has happened with the state police since I’ve been governor has been perfect.”

“They’re alleging that I have been personally involved in these things and I have not,” Edwards told the caucus.

In his news conference, the governor also denied the state House speaker’s contention that he sought to discourage a legislative inquiry into the case last year by blaming Greene’s death on a car wreck.

Schexnayder told AP outside the House chamber Tuesday that “I stand by my comment.” Asked whether his relationship with Edwards is “strained” he said, “I don’t have any ill will toward the governor.”

Leaders of Louisiana’s GOP-led legislature have vowed to take action against Edwards over his handling of the Greene case. The drama is playing out amid a more than two-year-old federal civil rights investigation into the deadly encounter and whether police brass obstructed justice to protect the troopers who arrested Greene.

Edwards expressed private frustration with the amount of time it has taken federal authorities to file charges in Greene’s death.

“Are they ever going to come out and have a charge?” the governor asked during his meeting with the Black lawmakers, adding he believed the troopers’ treatment of Greene had been criminal “from the very first time I saw” footage of it in October 2020.

Edwards at times struck a rejected tone during his meeting with the lawmakers.

“This is the worst,” he told them. “I can’t imagine a worse day in my life than today.”

“I apologize with the core of my soul that we haven’t made the progress over the last year that I hoped to have made and that I thought we were making with state police,” Edwards said. “I am more disappointed in me than probably you are.”

Mustian reported from New York and Bleiberg from Dallas