Skip to content
Home News Lottery winners: Why some people decide to stay anonymous – and some don’t

Think of the initial decisions a lottery winner might have to make and plenty of spring to mind.

Where to go on holiday when the entire world is suddenly within budget. Just how many bedrooms your dream home might have. How to tell your boss that you’re probably not going to be in tomorrow morning. Or, indeed, ever again.

Yet there is perhaps one big call that comes before all of those considerations: do you go public with the fact you are now one of the country’s richest people?

News that a UK ticket-holder scooped a record-breaking £184m EuroMillions jackpot on Tuesday night means that somewhere out there – potentially a neighbor of yours – is someone suddenly able to buy their own Caribbean island or an entire central London street (depending on the street).

But the chances are, it seems, we will never know who that person is.

Despite the winner now finding themselves almost as rich as singer Ed Sheeran – and all without inflicting shape of you on us – the likelihood is they will never publicly reveal themselves. Some 80 per cent of big lottery winners in the UK stay anonymous, according to Camelot, the organization which runs the UK National Lottery.

So why do so many winners shy away from lauding their new wealth? And why do the 20 per cent go for the champagne-for-the-cameras reveal?

“I think people have had this huge life-changing experience and they want to celebrate it rather than hide it,” says Andy Carter, senior winners advisor with Camelot. “They want to be free to be transparent and open with friends and family about what has happened. It’s a lovely thing, certainly nothing to be scared of.”

Taking the offer of a press conference allows winners the opportunity to do all media interviews in one afternoon and then move on, the company says.

“You get to control the entire process,” Carter adds. “By not going public, the moment you start telling a few people about the win, there is always that possibility that it gets out and you suddenly have reporters turning up at your door.”

Camelot, of course, would say that. It’s clearly in the company’s interest to get maximum publicity for winners.

“They are selling a dream,” says Ashlea McConnell, a PR consultant based in Sheffield. “And what better way to sell it than have a lovely everyday person telling their story of how they suddenly won this eye-watering sum of money? It is absolutely the sort of story that will have others buying tickets week in and week out.”

Would she advise people to go public? It depends on the circumstances.

As someone who specializes in managing publicity for clients who have won multi-million pound compensation claims following legal rulings, she says there is often a desire among her clients to publicize their success to highlight that the payment is deserved, hard-won and, above all else possible.

But scooping an entirely chance-based lottery is different.

“I think, if you are going to splash the cash as a lottery winner, there is probably an element of ‘you might as well get it out there’,” says McConnell. “But so many people seem to want to continue living as they always had done, albeit more comfortably. For them, I’m not sure there are too many benefits of going public.”

Stories of begging letters and fears of being targeted by criminals do put many off, anecdotal evidence suggests. The thought of jealous neighbors (or friends) turns others away from the idea. The suggestion that newspapers will reveal in any future downfall may be another deciding factor, such as reports of so-called “lotto lout” Michael Carroll’s bankruptcy.

Yet despite all this, former winner Elaine Thompson remains a big advocate for telling the world.

The former supermarket assistant from Newcastle won £2.7 million in 1995 – back when £2.7 million wasn’t just about enough to cover your annual fuel bills.

She to announce it at a press conference because she didn’t like the thought of hiding it.

“I’ve never seen so many cameras as that afternoon,” the 66-year-old recalls. “I had my husband and brother with me but they were both struck dumb so I had to do all the talking. That’s never been a problem, mind.”

The mother-of-two, and now grandmother-of-two, started some hospitality businesses, bought a new house and gave money to her brother. She ensured her two children left university with no debt.

“I’m a hard-working woman from the north-east and having a few more quid never changed that,” she says. “Buying that ticket was one of the best things I ever did.” 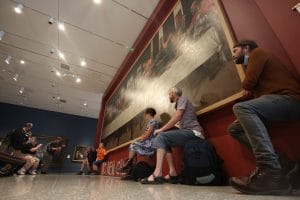