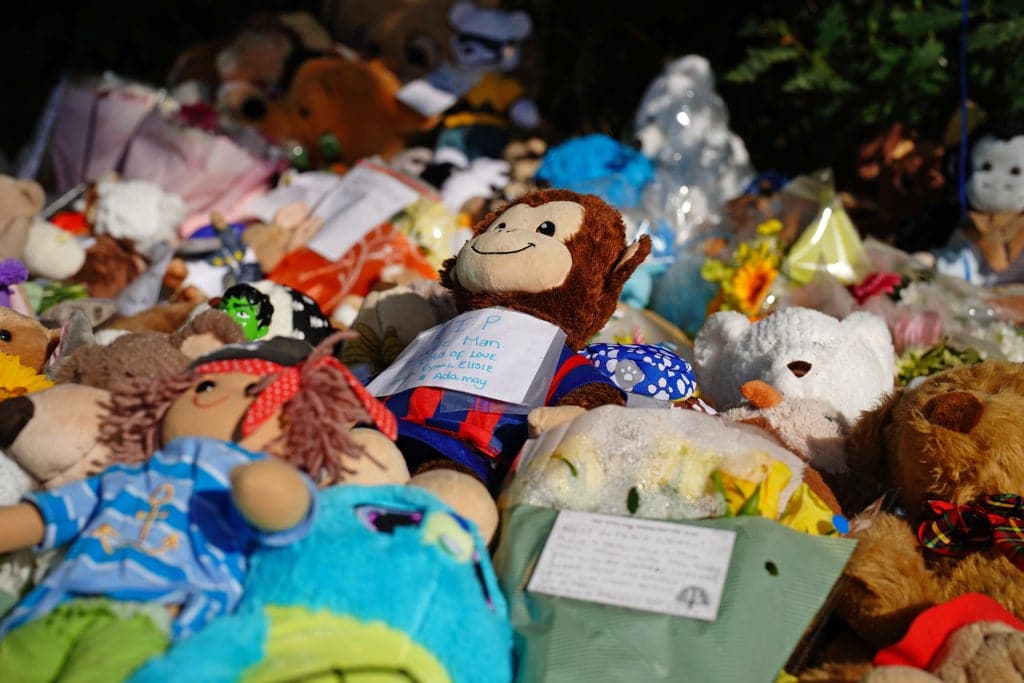 The mother of a murdered five-year-old found dumped in a river admitted to police after four days of questioning she knew his stepfather had beaten him, a court has heard.

Logan Mwangi was found by police in the River Ogmore in Pandy Park, Bridgend, on July 31 2021, a few hundred meters from his family home in Lower Llansantffraid, Sarn.

He had suffered catastrophic internal injuries similar to those found in victims of high speed crashes or a fall from height.

Logan’s mother Angharad Williamson, 30, his stepfather John Cole, and a 14-year-old boy, who cannot legally be identified, are on trial at Cardiff Crown Court accused of murder.

On Thursday, jurors were read transcripts of Williamson’s police interviews, in which she repeatedly insisted she had found Logan’s room empty in the early hours of July 31.

Cole claims Williamson found the little boy dead in his bed and that, after unsuccessfully performing CPR, they made the decision “to get him out of the house”.

Williamson told police over the course of three interviews that she had no idea how her son received his fatal injuries.

She insisted that Cole was a great dad and had never been violent towards her or Logan.

In a final interview on August 4, 2021, Williamson claimed two days before his death Cole had punched Logan several times to the stomach and “sent him flying”.

She added that Cole had goaded the 14-year-old defendant into joining in the attack.

When asked why she was only revealing this now, she replied: “Jay is SAS, he’ll have killed me.”

She added: “His parents were the founding members of the SAS, I could never leave him, he told me if I ever left him he would have killed me.

When pressed on her previous lies by interviewing officer Detective Sergeant Christian Burt, Williamson replied: “What part of ‘I’m scared, this man is in the SAS’ don’t you understand?”

She claimed that after punching Logan three or four times, Cole had lifted the little boy’s t-shirt up to see the bruise and remarked “that’s a good one”.

Williamson told police: “(Logan) wasn’t crying, he was just standing there and he took it, I was mortified I didn’t take him straight to hospital.”

She added that she initially thought Logan might have run away in the wake of the assault.

Williamson said that after the attack on Logan, Cole had turned to the youth defendant and told him to “sweep” him if the victim were to “flinch one more time when I am trying to talk to him.”

The defendant claimed she had checked Logan over and claimed he had only suffered some red marks as a result of the two assaults.

Cole and the youth defendant were caught on CCTV leaving the flat around 2.45am on July 31, Cole was filmed carrying something in his arms, which he later admitted was Logan’s lifeless body.

During this time, a light can be seen switching on and off in the kitchen, which the prosecution said proves Williamson was awake and knew what had happened to her son.

Williamson claimed that the switch got stuck sometimes, and repeated that she had been asleep throughout.

When pressed, she responded: “I was not awake, I did not switch the light off, if I was awake I could have saved Logan, how many times do I have to tell you?”

Williamson and the youthful murder and perverting the course of justice.

Cole denies murder but admits perverting the course of justice.

Cole and Williamson are also charged with causing or allowing the death of a child.