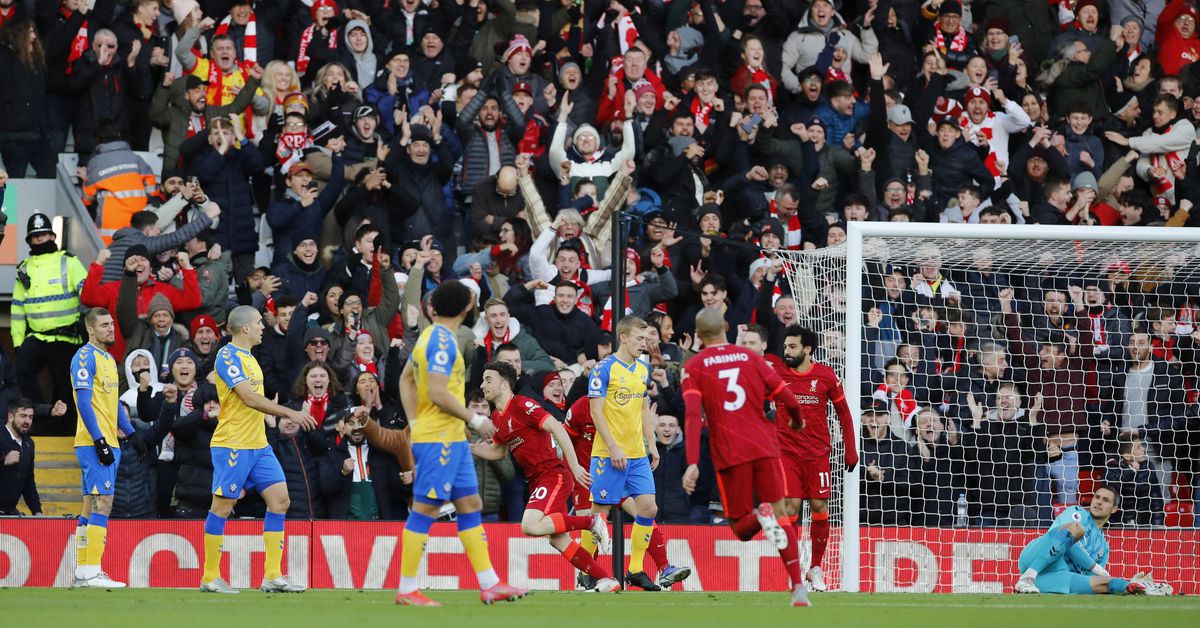 LONDON, Nov 27 (Reuters) – Liverpool churned out another big victory when they thumped Southampton 4-0 to close in on Chelsea at the top of the Premier League on Saturday, while former skipper Steven Gerrard enjoyed a second consecutive win as Aston Villa manager.

Liverpool have now scored 39 times in 13 league games this season after Diogo Jota’s double and goals by Thiago Alcantara and Virgil van Dijk eased them past Southampton at Anfield.

Juergen Klopp’s side have scored at least twice in 17 consecutive games in all competitions, the first English top-flight side to achieve that since Sunderland in 1927.

Villa followed up their win over Brighton & Hove Albion last week in Gerrard’s first game in charge with a 2-1 victory at Crystal Palace, with Matt Targett and John McGinn scoring.

Newcastle United’s new manager Eddie Howe took his place on the touchline for the first time after missing last week’s draw against Brentford because of a positive COVID-19 test, but saw his side lose 2-0 away at Arsenal.

Goals by Bukayo Saka and Gabriel Martinelli sealed the points for fifth-placed Arsenal to move them level on 23 points with fourth-placed West Ham United who face champions Manchester City on Sunday.

See also  From Prince Andrew to Trump: All the biggest names embroiled in the Ghislaine Maxwell trial

For bottom club Newcastle, now winless in 13 games and with only six points to show for their season so far, the relegation fears show no sign of easing.

Newcastle’s next two games — at home to fellow strugglers Norwich City and Burnley — could define their season.

“We can only do our talking on the pitch and try to fight back,” said Howe, whose side are six points from the safety zone.

“Of course it’s difficult enough in the Premier League when you’re fighting for points but with a big deficit it’s very difficult.”

Second-from-bottom Norwich failed to make it three wins in a row as they drew 0-0 at home to Wolverhampton Wanderers but they moved level on nine points with 18th-placed Burnley who are at home to Tottenham Hotspur on Sunday.

The point did, however, edge Brighton up to eighth place, ahead of Manchester United.

Apart from defeat by West Ham earlier this month, Liverpool have been in imperious form of late and were simply too good for Southampton as they moved above Manchester City into second place, a point behind Chelsea.

Jota steered home Andrew Robertson’s cutback to open the scoring after 97 seconds before another simple finish, following fine work from Mohamed Salah, put Liverpool two goals up and in command inside 32 minutes.

Midfielder Thiago added to his stunning goal against Porto in the Champions League in midweek with a third five minutes later and Van Dijk helped himself to a fourth against his former club early in the second half.

“The game felt comfortable in the end but during it I did not feel too comfortable,” Klopp said.

Chelsea are at home to Manchester United on Sunday.