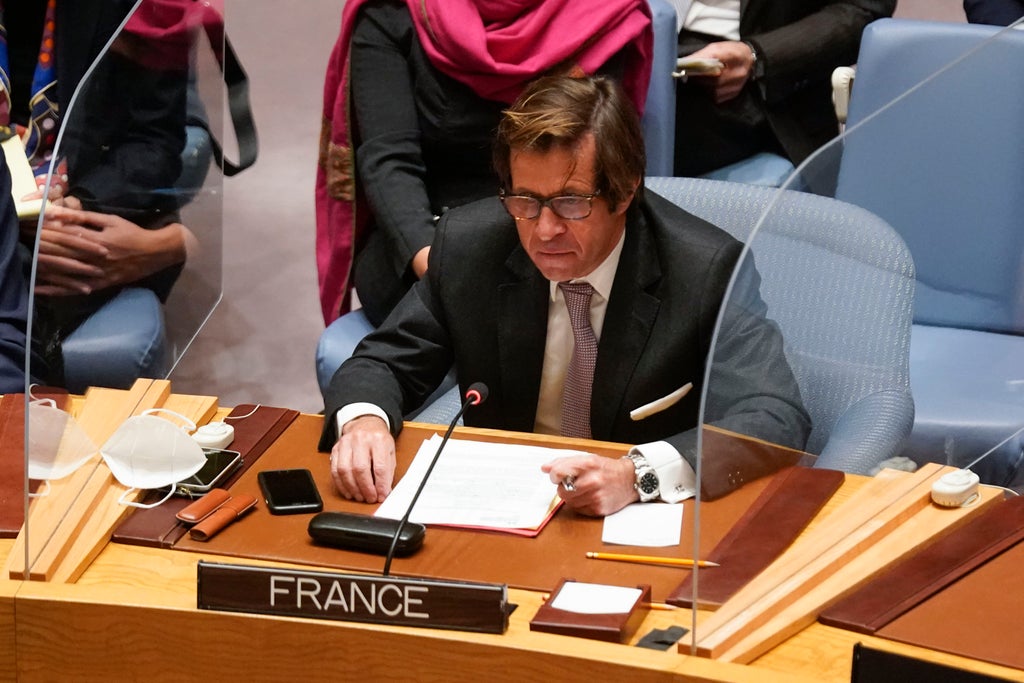 The latest on the Russia-Ukraine war:

UNITED NATIONS — The two major bodies in the United Nations will hold separate meetings Monday on Russia’s invasion of Ukraine.

The meetings of the 193-nation General Assembly and the more powerful 15-member Security Council reflect widespread demands for a cease-fire and escalating concern for the millions of Ukrainians caught up in the war.

The Security Council gave a green light Sunday for the first emergency session of the General Assembly in decades. It will give all UN members an opportunity to speak about the war and vote on a resolution that US Ambassador Linda Thomas-Greenfield said would “hold Russia to account for its indefensible actions and for its violations of the UN Charter.”

French Ambassador Nicolas De Riviere announced the Security Council meeting on the humanitarian impact of Russia’s invasion, a session sought by French President Emmanuel Macron to ensure the delivery of aid to people in need in Ukraine.

Both meetings follow Russia’s veto of a Security Council resolution demanding that Moscow immediately stop its attack on Ukraine and withdraw all troops. The vote Friday was 11-1, with China, India and the United Arab Emirates abstaining.

TOKYO — The ruble has sunk nearly 26% against the US dollar after Western nations moved to block Russian banks from the SWIFT global payment system.

The ruble was trading at a record low of 105.27 per dollar early Monday, down from about 84 per dollar late Friday.

Over the weekend, Japan joined the moves by the US and other Western nations to impose more sanctions against Russia.

Restrictions on the Russian central bank target its access to more than $600 billion in reserves the Kremlin has at its disposal. They hinder Russia’s ability to support the ruble as it plunges in value.

Sanctions announced earlier had taken the Russian currency to its lowest level against the dollar in history.

MANILA, Philippines — Southeast Asian countries have expressed deep concern over the hostilities in Ukraine and called for dialogue but did not condemn the Russian invasion despite calls for a tougher stance against Moscow’s aggression.

The foreign ministers of the Association of Southeast Asian Nations issued a statement Monday calling “on all relevant parties to exercise maximum restraint and make utmost efforts to pursue dialogues through all channels” before the situation gets out of control.

“It is the responsibility of all parties to uphold the principles of mutual respect for the sovereignty, territorial integrity and equal rights of all nations,” the regional bloc said.

ASEAN prioritizes consensus among its 10 members and leans conservative on global matters. The bloc engages with Russia in annual political, security and economic talks as a key dialogue partner.

WASHINGTON — A senior US intelligence official says Belarus is expected to send troops into Ukraine as soon as Monday to fight alongside Russian forces that invaded Ukraine last week.

Belarus has been providing support for Russia’s war effort, but so far has not taken a direct part in the conflict.

The American official has direct knowledge of current US intelligence assessments and says the decision by Belarus’ leader on whether to bring Belarus further into the war depends on talks between Russia and Ukraine happening in the coming days. The official spoke anonymously to discuss the sensitive information.

Russian forces have encountered strong resistance from Ukraine defenders, and US officials say they believe the invasion has been more difficult, and slower, than the Kremlin envisioned, though that could change as Moscow adapts.

The London-based internet monitor NetBlocks reports that Facebook’s network of content-distribution servers in Russia was so badly restricted Sunday that “content no longer loads, or loads extremely slowly making the platforms unusable.”

Russian telecoms regulator Roskomnadzor on Friday announced plans to “partially restrict” access to Facebook. That same day, Facebook’s head of security policy had said the company was barring Russian state media from running ads or otherwise profiting on its platform anywhere in the world.

Facebook says it has also refused a request by the Kremlin not to run fact checks related to Russia’s invasion of Ukraine on the platform for users inside Russia.

NetBlocks reported earlier that access to Twitter was similarly restricted Saturday. That was a day after Twitter said it was temporarily halting ads in both Ukraine and Russia.

The Twitter and Facebook restrictions can be circumvented inside Russia using VPN software, just as users do in mainland China.

BERLIN — The United Nations’ nuclear watchdog says missiles have hit a radioactive waste disposal site in the Ukrainian capital of Kyiv, but there are no reports of damage to the buildings or indications of a release of radioactive material.

The report came a day after an electrical transformer at a similar disposal facility in the Ukrainian city of Kharkiv was damaged.

Such facilities typically hold low-level radioactive materials such as waste from hospitals and industry, but Grossi says the two incidents highlight a “very real risk.” He says if the sites are damaged there could be “potentially severe consequences for human health and the environment.”

The Australian government’s announcement Monday gave no details on what material it may be sending. The move follows an offer on Friday of non-lethal military equipment, medical supplies and a $3 million contribution to a NATO trust fund for support of the besieged country.

Australia has imposed sanctions on more than 350 Russian individuals, including Russian President Vladimir Putin since Thursday.

Australia has also targeted with sanctions 13 individuals and entities in Belarus, including that country’s defense minister, Viktor Khrenin. Belarus is supporting Russia in its war with Ukraine.

Rogers spokesman Andrew Garas says Russia Today will no longer be available on its channel lineup as of Monday.

FRANKFURT, Germany — An Austria-based subsidiary of Russia’s state-owned Sberbank has been ruled likely to fail after depositors fled due to the impact of Russia’s invasion of Ukraine.

The European Central Bank said early Monday that the bank had 13.6 billion euros in assets at the end of last year, but has experienced “significant deposit outflows” due to “geopolitical tensions.”

The ECB says Vienna-headquartered Sberbank Europe AG “is likely to be unable to pay its debts or other liabilities as they fall due.” The bank is a fully owned by Russia’s Sber subsidiarybank, whose majority shareholder is the Russian government.

Europe’s bank resolution board separately says it has imposed a payments ban on money owed by the bank and a limit on how much depositors can withdraw. Further steps could include restructuring or liquidating the bank.