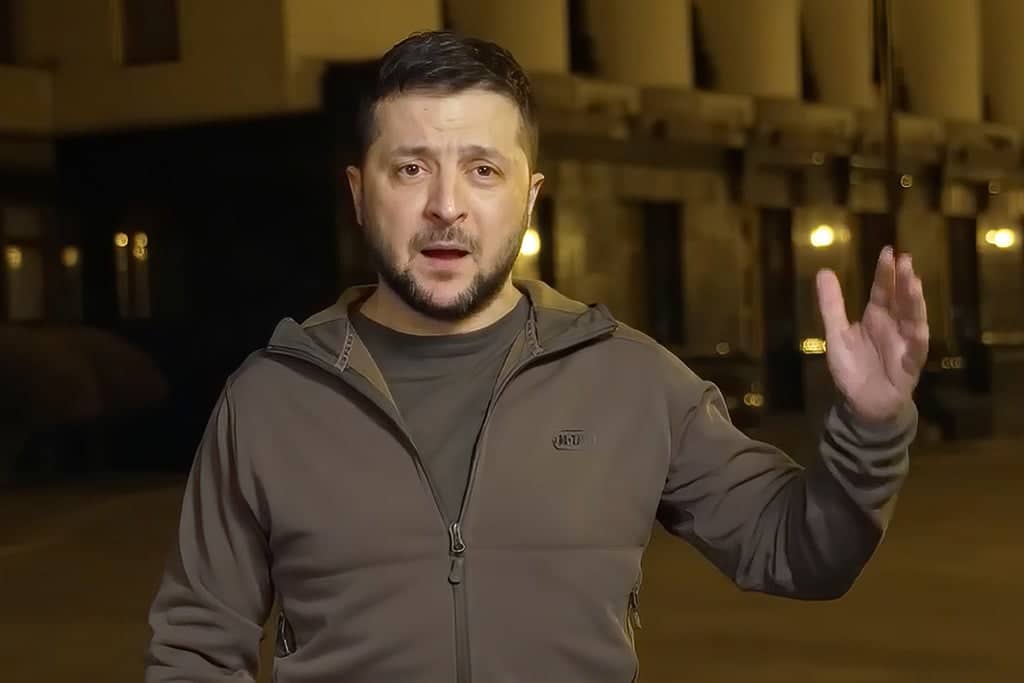 A short Facebook statement about the ship was accompanied with photos and videos of fire and thick plumes of smoke in the port.

The Russian military has not commented on what happened to the ship.

Berdyansk has been under Russian control since Feb. 27.

KEY DEVELOPMENTS IN THE RUSSIA-UKRAINE WAR:

— UN to vote on blaming Russia for Ukraine humanitarian crisis

— Go to https://apnews.com/hub/russia-ukraine for more coverage

WASHINGTON — The US State Department says Russia has begun the process of expelling several more diplomats from the US embassy in Moscow.

The department said it received a list of diplomats on Wednesday who have been declared “persona non grata” by the Russian foreign ministry. It didn’t say how many diplomats were affected by the order, which generally results in the expulsion of those targeted within 72 hours.

The Russian foreign ministry summoned US Ambassador to Russia John Sullivan on Monday to protest President Joe Biden’s description of Russian leader Vladimir Putin as a “war criminal” over the invasion of Ukraine. After that meeting, Russia warned that it was close to severe diplomatic relations with the United States, which would be unprecedented.

The State Department called Wednesday’s move “Russia’s latest unhelpful and unproductive step” in relations between the countries. It urged Russia “to end its unjustified expulsions of US diplomats and staff.”

LVIV, Ukraine — Russian troops who occupy the southern Ukrainian city of Kherson seized one of the country’s most prominent theater directors “in a fascist manner” and took him to an unknown location, Ukraine’s Culture Minister Oleksandr Tkachenko said.

Witnesses said nine Russian military vehicles pulled up to the home of Oleksandr Kniga early Wednesday and led him out. The Russians warned neighbors that if they came out of their homes, they would be killed, the witnesses said.

“The whole world should know about this!” Tkachenko said on Facebook.

Kniga, 62, is one of the most important and respected theater directors in Ukraine. He founded the international theater festival Melpomene of Tavria.

He was among many in Kherson who opposed the Russian occupation. On Monday, Russian troops used stun grenades and fired in the air to disperse a protest.

LVIV, Ukraine — Ukrainian President Volodymyr Zelenskyy called on NATO to provide “effective and unrestricted” support to Ukraine, including any weapons the country needs to fend off the Russian invasion.

“We ask that the alliance declare that it will fully assist Ukraine to win this war, clear our territory of the invaders and restore peace in Ukraine,” he said Wednesday during his nightly video address to the nation.

Zelenskyy will speak to the NATO summit Thursday by video, his office said.

He appealed to Western countries to stay united in the face of what he says are Russia’s efforts to “lobby its interests” with “some partners” to bring them over to its side.

“We will see who is a friend, who is a partner and who has sold out and betrayed us,” he said in an emotional speech. “Together we should not allow Russia to break anyone in NATO, the EU or G-7, to break them and drag them to the side of war.”

Zelenskyy noted that Ukrainian skies are still not closed to Russian aircraft and missiles and that Ukraine hasn’t received the fighter jets or modern air-defense systems it requested. He said Ukraine also needs tanks and anti-ship systems.

“It has been a month of defending ourselves from attempts to destroy us, wipe us off the face of the earth,” he said. “We have lasted six times longer than the enemy had planned… but the Russian troops are destroying our cities, killing civilians indiscriminately, raping women, kidnapping children, shooting refugees, capturing aid columns and looting.”

Johnson is traveling to Brussels on Thursday for talks with NATO and leaders of the Group of Seven. He is expected to provide further details of the new British aid during the visit, including the donation of 6,000 more missiles comprising anti-tank and high-explosive weaponry.

“The United Kingdom will work with our allies to step up military and economic support to Ukraine, strengthening their defenses as they turn the tide in this fight,” Johnson said.

Britain has already sent more than 4,000 anti-tank weapons to Ukraine.

The UK government also says it is providing some 4 million pounds ($5.3 million) in emergency funding to the BBC World Service to counter disinformation in Russia and Ukraine.

LVIV, Ukraine — Ukrainian President Volodymyr Zelenskyy has called on people around the world to come “to your squares, your streets” to stand with Ukraine and against the war.

He said late Wednesday in his nightly video address to his people that the war “breaks my heart, the hearts of all Ukrainians and every free person on the planet.” He called for people to visibly show their support for Ukraine starting from Thursday, exactly one month after Russia launched its invasion.

He said, “Come from your offices, your homes, your schools and universities. Come in the name of peace. Come with Ukrainian symbols to support Ukraine, to support freedom, to support life.

Switching to Russian, Zelenskyy appealed to Russians “to leave Russia so as not to give your tax money to the war.” Tens of thousands of Russians already have fled Russia since the war began, fearing the intensifying crackdown at home.