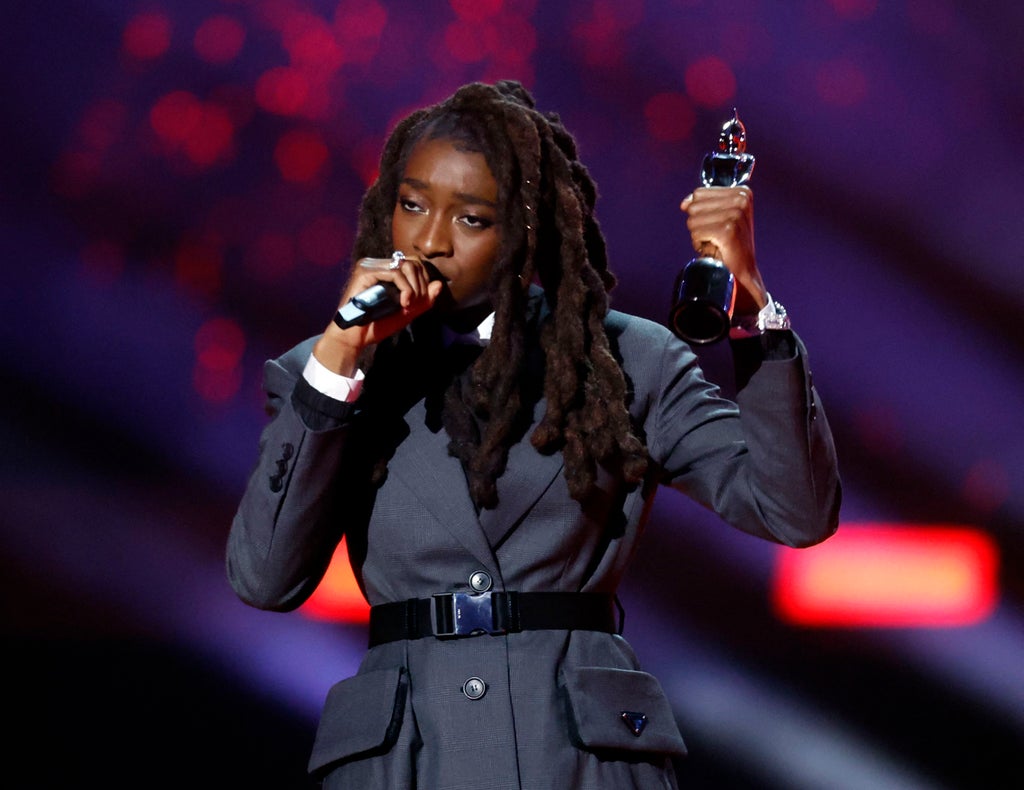 Eleven years since she mesmerized the audience with her debut performance of “Someone Like You”, Adele proved herself once again as Queen of the Brits. The British artist scooped three awards at this year’s ceremony at the O2 Arena, including Artist of the Year and the coveted Album of the Year prize. She is also now the only solo artist to have won Album of the Year three times-with only the bands Coldplay and Arctic Monkeys equaling her total.

In the inaugural year of a Brit Awards without gender-based categories, women dominated, in spite of the naysayers who predicted it would prompt a step back in representation. Along with Adele’s wins, other artists to scoop top prizes included rapper Little Simz, who finally received Brits recognition with the Best New Artist award. Bringing her mother on stage with her de ella, the north London artist gave an empowering speech that praised her background for her, and encouraged future generations to pursue their dreams for her.

Wolf Alice, fronted by singer Ellie Rowsell, took home the prize for Best Group, following in the footsteps of rock acts including Arctic Monkeys and Foals. Meanwhile, Billie Eilish claimed the award for International Artist – having previously won Best International Female Artist two years running – and said in a pre-recorded message: “I am so honored and feel so lucky to be awarded this again. I don’t feel deserving.” She also expressed her excitement ahead of headlining this year’s Glastonbury Festival.

In the newly reintroduced genre categories, Becky Hill took home Best Dance Act and gave a tearful acceptance speech in which she thanked her fellow nominees, including heavyweights Calvin Harris and Fred Again. Little Simz’s speech was echoed by Dave, who won the Hip Hop/Grime/Rap category and spoke of how rap had previously been maligned as a genre within the wider music industry.

Later on in the night, Adele triumphed again with one of the biggest prizes of the night, for Artist of the Year. In a touching acceptance speech, she praised the wealth of talented young artists in the UK, including fellow Brit winners Little Simz and Dave. “I want to say a massive congratulations to Little Simz. I’ve got so much love for you,” she began, adding: “Dave, Ed, Sam, I am so proud to be in your company. I love being an artist, I really do, and I genuinely can’t believe it is my job.”

“And real artistry, I know I have spoken about it before, but there are so many new artists here. England, the UK, we have so many incredible new young artists coming up. Never lose sight of why you are who you are, ” she continued. “The reason people are into you is because of something you have in you. Don’t let go of that ever.

She concluded: “And also, I understand why the name of this award has changed but I really love being a woman and being a female artist. I do. I am really proud of us.”

Adele’s Artist of the Year win followed a performance of her song “I Drink Wine”, from her chart-topping album fourth studio album 30, for which she was introduced by host Mo Gilligan as “undisputed queen of the Brits”.

Ed Sheeran missed out on all of the awards he was nominated for, but still didn’t go home empty-handed. A surprise appearance from Succession star Brian Cox saw the British artist presented with Songwriter of the Year, his seventh Brit Award to date. “Thank you so much,” the 30-year-old said, shouting out his co-writers and label Atlantic Records. He took a moment to thank her wife, Cherry Seaborn, for her willingness to come and listen to her songs-in-progress and show her support for her. He then performed a rendition of his song “Joker and the Queen”, from his latest chart-topping album by him, = (Equals), while backed by a string section.

When it came to awards presenters, viewers seemed baffled by the seemingly random contingent trooping on and off the stage. From diving champion Tom Daley to English footballer Ian Wright, Mo Farah and Doctor Who star Jodie Whittaker, many seemed to have virtually no links to the prizes they were presenting – or indeed any links at all to the music industry. Many also noted that Gilligan appeared nervous in his debut hosting stint, following Jack Whitehall’s four consecutive years as Brits host. The comedian lacked Whitehall’s bite, and went for a friendlier approach in comparison to Whitehall’s habit of poking fun at his celebrity guests.

The final and biggest award of the night went to Adele, who thanked her ex-husband Simon Konecki and their son, Angelo, along with producer Inflo who worked with her on her Album of the Year, 2021’s 30. Closing the evening was Dave, with a phenomenal performance that invited on to the stage his fellow rappers, including Fredo, Giggs and Ghetts, along with a gospel choir. It seemed to be one of those rare awards shows where, for the most part, everyone got the acknowledgment they deserved.