Skip to content
Home News Listen and accompany: how to prevent suicide? 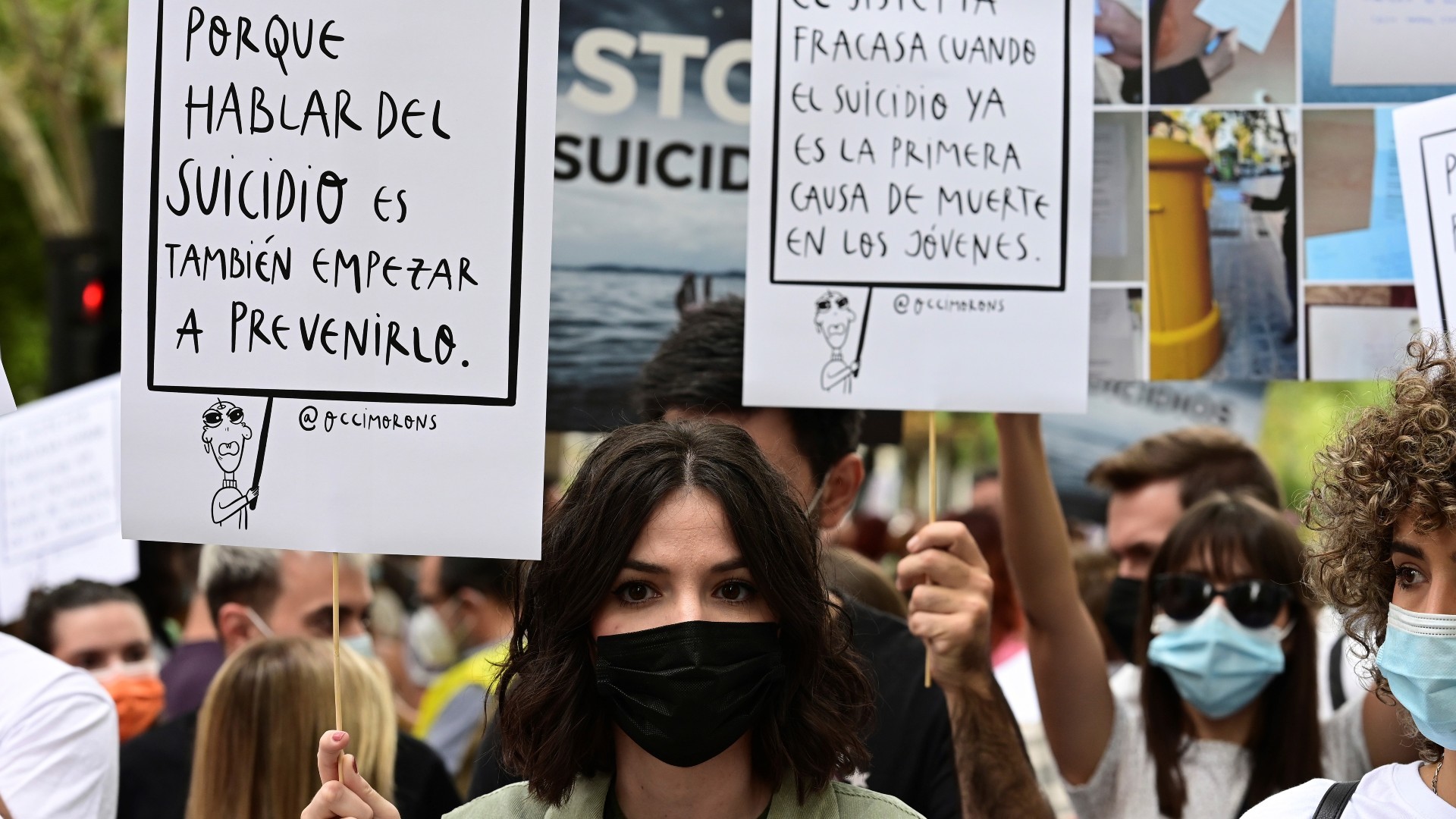 The silent epidemic is not so silent anymore. Suicide, the leading cause of unnatural death in Spain, makes headlines, takes hundreds of people out to the streets for the first time to fight for its prevention and reaches the political debate, something unheard of until very recently. The onslaught of the pandemic and its devastating effects on mental health has awakened a new sensitivity to this hidden problem.

Even so, experts confirm that there is still “a lot of ignorance and stigma” among the population. Decades of taboo and “fear of talking about death in general” have taken a toll on our way of facing suicide, and they cause us to continue reacting with discomfort and silence, as the psychopedagogue and youth suicide specialist Mar Cortina points out.

Psychiatrists and psychologists compile for RTVE.es tips to prevent suicide: how to detect that someone close to you has suicidal ideas, what to do and what not to do about it and how to deal with the problem from its causes.

How to detect it?

“Listen, listen and listen” is the key to Cortina. Those with suicidal ideas “always give clues in some way, but we usually don’t listen,” he says. He cites the example of a patient, an adolescent who, in the middle of a conversation, mentioned that he “wanted to jump out the window.” “He kept talking, but later I asked him ‘what do you mean, you want to jump out the window?’ We have to be very sensitive to detect these types of phrases, even if they say them as a joke “, follow.

“The first and most basic thing is to ask. We believe that if we bring up the subject we will aggravate it, and that has been shown to be not true “, emphasizes the psychologist Raquel Errazquin. In this order, her advice to treat someone at risk of suicide is to” validate, listen and to look for help”.

90% of suicides occur among people with a prior mental illness, usually depression or bipolar disorder. For this reason, the fundamental thing to detect these behaviors in time is “a good diagnosis”, affirms the psychiatrist Andrés Martín.

He believes that in general it is easy to detect if someone in our environment suffers from depression, since this disease has characteristic symptoms. “They are things that are observable from the outside, such as the inability to enjoy, anxiety, difficulty concentrating, loss of appetite or sleep disturbances, “says Martín, who cares for seriously ill patients at the Nuestra Señora del Pilar Psychosocial Rehabilitation Center in Zaragoza.

According to Martín, those people who think about suicide can show it openly or give “flashy signs” such as leaving goodbye letters or repeating phrases like “I feel like a burden.” In general, a person with suicidal ideas “has the feeling that doing so is going to free others from suffering.”

What not to do?

It is advisable to avoid common places that are repeated before those who suffer from depression. “Saying ‘do your part’, ‘do your will’, ‘let’s go out’ does a lot of damage”, warns the psychiatrist. “The intention is good, but depressed people see that they do not understand them, because it is not that they do not want to, it is that they cannot. If someone has a broken leg, do you tell them to do your part and go run?” .

Errazquin, for his part, does not recommend hackneyed phrases like “think of your children.” “That person has already thought of their loved ones. Those words can only provoke more guilt “, claims.

The psychologist debunks the myth that “ideas about death, autolytic gestures – suicide attempts or self-harm – or disproportionate intake of medications they are calls for attention and as such they must be ignored “. He warns that it is a mistake to take weight off these behaviors, since “they are cries for help, ways that the person finds to express something that he is experiencing and that he does not know how to express in another way.” Nine out of ten people who commit suicide have warned in some way before doing so.

You also have to avoid saying other phrases that begin with “I in your place …”. “Nobody is in the place of the other in such a difficult moment,” he adds.

How to deal with someone at risk of suicide?

Faced with these examples, specialists highlight the importance of the potentially suicidal person “not feeling alone.” “That person has to feel that you love them and that you care, that they are going through what is happening that you accompany them”, Cortina claims. In practice, this means being aware of that person, saying “that phrase you said worried me, I’m going to follow you.” And do it “directly, without hiding it, without saying ‘let’s have a coffee’, because you have to talk about suicide.”

The Aragonese psychiatrist agrees with her: “We have to offer ourselves to them, tell them ‘if you feel like doing such a thing, I’ll accompany you, I’ll help you.”

“Suicide is a permanent way out of a temporary situation“

A fundamental idea that must be transferred to the person at suicide risk is, for Errazquin, that “suicide is a permanent way out of a temporary situation”. He remembers that there is a way out of the problems that can lead to suicidal ideation, and based on examples from his consultation, where cases like this happen, he defends that “the person can continue with his life” after a suicide attempt. “They don’t want to end their life, they want to end the suffering,” says Cortina.

“You have to invite that person to the company of their loved ones and little by little invite them to go to a mental health professional or a health center,” he recommends. According to Martín, on many occasions the first contact is usually the Telephone of Hope, 717 003 717 or 914 590 055, and that from there it is convenient to seek professional psychological help.

How to act before children and adolescents?

The pandemic, lack of socialization during confinement and future prospects have triggered suicidal behaviors among the youngest. In 2020, child suicides have doubled – from 7 to 14 in one year – and 300 people in the 15 to 29 age group have taken their own lives, according to INE data.

Faced with this, specialists recommend an approach similar to that of adults, although with some peculiarities. “Their language is more symbolic, they give clues in some way, but they are not as direct as adults. You have to keep the radar on, “says Cortina, who works with young people with suicidal ideas in a public institute.

It is also necessary to understand the specific needs of adolescents, such as “the importance of socialization”, diminished by the pandemic, they explain from the Telephone of Hope. In these ages, for one “emotional management still in development”, pain is expressed with self-harms, for example, another sign to pay attention to, according to Magdalena Pérez, psychologist and head of the area of ​​suicide prevention

Among adolescents, it is necessary to act more quickly, and spend enough time to gain their trust. “The best prevention is to have time to dedicate to the cases, not only among psychologists, but also from primary care and in educational centers “, says César Sanz de la Garza, from the Spanish Association of Neuropsychiatry

Cortina gives the example of a student who needs urgent psychological attention. However, when trying to refer her to the mental health unit for children and adolescents in her community It has been found that she will not be able to be treated until April due to the lack of personnel in psychiatry.

From the media to families: talking about suicide

For decades it has been the idea that reporting suicide creates a knock-on effect, known as the “Werther effect” in reference to Goethe’s novel. The style books of some media recommend not broadcasting news about suicides in order not to incite other people with similar ideas, but it is a “myth”, since despite this informative silence the figures have not only been reduced but also increased, reveals Martín. “Now we are in the opposite position: we must claim the advantages of talking about depression, suicide, to try to reduce this incredible number of deaths.”

The The media have a “fundamental role” to disseminate and, above all, “destigmatize suicide”, claims Andoni Anseán, president of the Spanish Foundation for the Prevention of Suicide. Of course, they must do so with respect to the victim, not associate it with a single cause, not glorify or blame the victim, avoid reporting morbid details such as the method and place of suicide -which can be imitated-, or spread their messages of fired. Guides such as the Ministry of Health or the WHO offer more details.

Experts defend the “Papageno effect” against the “Werther effect”. In Mozart’s opera The magic Flute, the protagonist of the play Papageno wants to commit suicide, but is finally avoided by three children who convince him to continue living and offer him alternatives. Now this example is used to describe the positive of talking about suicide responsibly, and the contagion effect of giving information about people who have overcome this crisis in a positive way and without suicidal behavior. It has even led to the birth of the Papageno Association, with resources to prevent suicide.

Fighting the stigma of mental illness in the media

Attacking the problem from the source: public prevention policies

The sources consulted agree that beyond what can be done privately, the increase in suicides is largely conditioned by the current social and economic situation. Deaths from this cause increase during economic crises, as occurred during 2008 and the current one, but remain hidden behind stigma. The taboo, says Errazquin, has been eroding this pandemic year, but “there is still a long way to go.”

They demand the implementation of a National Suicide Prevention Plan, something similar to the new Mental Health Strategy that the Government presented at the beginning of this month, and which nevertheless they see as a “good starting point” but with “things that must be sharpened and that can be improved “, according to Martín.

They also ask for a public telephone, free, confidential, with three digits and accessible 24 hours a day, such as 016 care for victims of gender violence. The President of the Government, Pedro Sánchez, promised to launch it in October, although it is not yet underway.

Administrations must “provide professional and personnel resources” to the mental health system, and in the case of adolescents, to train “all education professionals, not only counselors”, claims Cortina, so that they can detect signs of self-harm and suicide attempts. For Anseán, in addition, it is also key to offer training to “police or firefighters, the first intervention forces that appear in cases like these.”

Beyond these specific actions, Cortina raises the need to rethink our current fast-paced, work-focused lifestyle: “The The system we live in creates a disillusionment with life in people, and this pandemic is putting that system in evidence. ” Given this, we have to learn to change what does not make us happy, to go to therapy if we need it and also to question this way of life, he concludes.

My gram of madness – Demonstration against Suicide. #YoNoMeCallo – 09/13/21 – Listen now