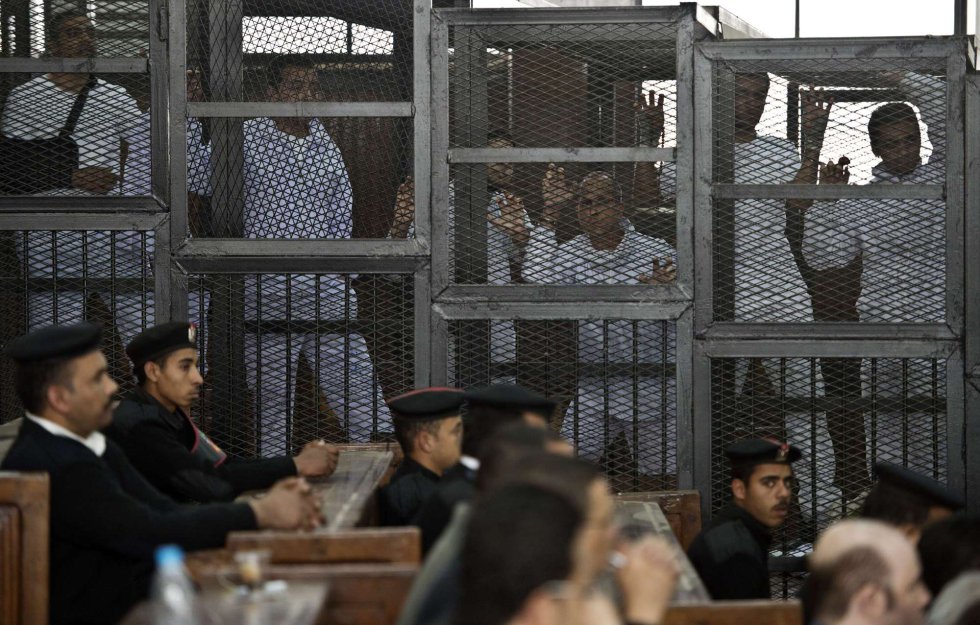 Abdelrahman el Gendy was only 17 years old when he faced his party of welcome. He arrived in prison in a police van and was greeted by two long lines of soldiers arranged opposite each other, creating a corridor of batons, whips, metal bars, belts and clenched fists that stretched from the rear of the vehicle to the jail entrance, suddenly turned into something desired. A grand entrance, says the young man, without a red carpet, pure prison liturgy, a theater of cruelty.

His life had changed forever on October 6, 2013. On the eve of his first day as an engineering student at the German University in Cairo, El Gendy was arrested for photographing a peaceful protest with his father, who had accompanied him precisely for fear of security measures. Despite being a minor, he was charged and tried as an adult, and sentenced to 15 years in a maximum security prison. In total, he served more than six years behind bars, until January 13, 2020, when he was 24 years old.

In a series of thematic articles published in the Egyptian medium Mada Masr, Anatomy of an incarcerationEl Gendy has recounted his experience in prison for the past year. The young man immerses himself in life in an Egyptian cell, and with him, the readers. It evokes the space between 25 and 50 centimeters wide in which prisoners sleep, the code among inmates of not looking at a comrade being humiliated by guards, and the distinction between a genes, incarcerated on criminal charges, and a political, in prison for political reasons. And he describes the process of turning his cell into a kind of imaginary world: a sheet hanging from plastic containers that doubles as a closet, the blanket wrapping half a block of ice that serves as a refrigerator, or the container with holes connected to a smuggled pipe to a floor level faucet that works as a shower. He also recounts the equal parts heartwarming and heartbreaking weekly rituals of family visits, his mother’s tears, and his clandestine postal service. The deep fear of being forgotten, of never leaving. And life reduced to one day at a time.

“It was one day in my freshman year, when we were in the transport truck, coming back from our first court visit with handcuffs on. The scene was devastating for me ”, he evokes,“ and when I returned to my cell I took a pen and wrote about it ”. “That became a therapeutic process, to heal and face the situation,” he says.

El Gendy’s writings belong to a prison literature with a long tradition in Egypt. Memoirs, compilations of letters, novels, ethnographic stories and poems that delve into the confines of the political prison and its cruel conditions, and that reflect on issues such as the brutality of their regimes, their roots, or forms of resistance. Historical figures who have nurtured this genre include feminist authors like Nawal el Saadawi, left-wing activists like Sonallah Ibrahim, and radical Islamists like Sayed Qutb. And now, under the consolidated regime of Marshal Abdelfatá al Sisi, and with prison as the core element of his repressive apparatus, this literature resurfaces.

“Egyptian prison literature has been the chronicle of different periods of repression. But, in my opinion, these works published by former and current detainees are not necessarily a portrait of the situation in Egypt, but rather an attempt to write as a means of surviving a systematic process to break them down ”, considers Yasmin Omar, international lawyer of human rights. “I think that writing in jail or about jail in Egypt is an act of resistance,” he says.

The work that aroused the most buzz in 2021 was that of Alaa Abd el Fattah, the highest-profile political prisoner in Egypt. Born into a family of human rights lawyers and activists, Abd el Fattah, an engineer from software, became an icon during the social unrest of 2011 – which forced the resignation of Hosni Mubarak – for his political activity and as a blogger, something that in the last decade has cost him almost three-thirds of his time behind bars.

Last October, the British publisher Fitzcarraldo published his book You have not yet been defeated (You have not yet been defeated), a selection, with a foreword by Naomi Klein, of Abd el Fattah’s essays, media posts, interviews, blog posts and letters written since 2011, many of them from prison. The work offers a unique testimony to the opposition of a leading intellectual in a decade of global upheaval, and gathers ideas on technology, history, politics, and reflections on the meaning of prison.

Since last June, the Egyptian journalist and politician Khaled Dawoud, arrested in September 2020 and imprisoned for 19 months without trial, has published another series of articles in the Egyptian medium. Al Manassa. This begins with his arrest when he was going to visit his sick father and offers a chronological account of his experience: his first meeting with the prosecutor, the tough first 11 days behind bars, the window to the world offered by visits, letters and encounters with lawyers, how difficult it is to kill time, the arrival of the coronavirus, the death of his sister. And along the way, reflections on forms of opposition, the prison sentence or on sheer survival.

Also last summer, another of Egypt’s famous political prisoners, the poet Ahmed Duma, who has spent 12 of his nearly 32 years in prison, published the collection of poems. Curly. In his case, he did it with a local publisher, but the work was quickly withdrawn and banned in the country and his environment is looking for an outside publisher that can publish it.

“The predominance of his political activity over his literary product, especially since the outbreak of the revolution, he does not like. He prefers to define himself as a poet; however, he considers that his revolutionary activity is an imperative in defense of the oppressed ”, explains Esmail Duma, brother of the writer. “His personal project is writing and poetry,” he says, “it is what he wanted to dedicate himself to completely.”

Throughout 94 pages, Duma, who has written since childhood, brings together a set of poems in Egyptian that he has written in solitary confinement and that he has secretly released from prison. In them, Duma speaks of freedom and unity, of injustice and fellow martyrs, of prison and defeat, of hope, of Palestine or the dream of a free homeland.

“In Egypt we are faced with deliberate attempts to erase our history, of what has happened since the revolution. [de 2011] until now: all this is being rewritten by the official narrative of the State, ”says El Gendy. “The only method of resistance we have are these counter-narratives: we provide an alternative history in case you want to see what is really happening,” he adds. “The other aspect is that people in jail are terrified of being forgotten abroad; You feel like nobody remembers you anymore, that you are a ghost ”, he notes. “We should talk about them, we should never forget them,” he concludes.