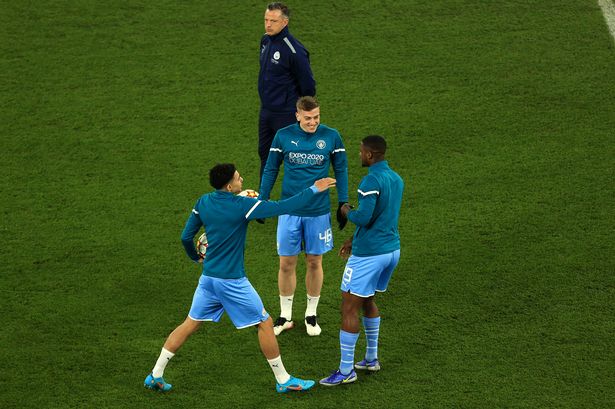 Sam Edozie and Liam Delap are making good progress at Manchester City as they continue their comebacks from injury. The two promising youngsters have both endured long spells on the sidelines this season. Delap had to wait until February for his first senior appearance of the campaign and Edozie only returned this month from an injury picked up in late October.

Both have been training with Pep Guardiola and the first team as part of their development; Edozie, 19, was namechecked by the manager recently as one of the few players in the squad capable of fast breaks on the ball. The duo have also been building up their fitness with the Under-23s in Premier League 2 action.

Sunday saw both start a 0-0 draw with Liverpool that moved Brian Barry-Murphy’s team a point closer to defending the league crown they won last year. It also marked the first time Edozie has managed 90 minutes since his injury to him, and the coaching staff have been delighted with his reaction to him.

“We speak a lot about the game and the outcome of it but much more important is to put players in the position where they can be where the first team manager wants,” Barry-Murphy told MEN Sport. “We’ve seen a big increase in the last two weeks in Sam’s capacity to go longer into games, and there has been a noticeable difference to where he was two weeks ago, then where he was last week at Crystal Palace, to now looking in a really good rhythm again.

“I think bearing in mind the severity of his injury was so significant for such a young player – it is the first time he has encountered such a severe injury and it was a really bad one – to see him come back so quickly and confidently. look so happy in contact situations is testament to the work he’s put in but very important for the player and the club that he’s progressed in such a great manner. recovery period and how when you come back in how you respond in similar situations to the one that caused the injury.

“But he’s made rapid progress and he has a set of skills that are pretty unique in terms of what he can do and he fits in very well with the profile of wide player that the club has been synonymous with. He’s a very important player and our job is to make him progress as fast as he can so that he can get as many opportunities as he can at the club.”

Delap also showed his improvement in the stalemate against tough Liverpool opponents. The two centre-backs he was up against were 6’5″ Billy Koumetio – who has earned high praise from Jurgen Klopp – and 6’5″ Rhys Williams, who has played in the Premier League and Champions League and spent the first part of this season at Swansea.

The 19-year-old more than held his own though, dropping deep and switching play for Edozie or combining with James McAtee and Oscar Bobb in the final third. “The most difficult challenge for Liam this season has been his significant injuries,” said Barry-Murphy. “To go through that process and now see him, physically he looks in a completely different place to where he was even two or three weeks ago.

“I thought he was good then but obviously he looks very strong and a lot quicker now and as a result his play looks more controlled and calm. He looks in a good place.

“Obviously there’s a lot more he can do in all aspects of his game as there would be with any young player but to see his progress again is very exciting as well. Rhys Williams has been on loan in the Championship. That’s a good test for him in terms of where he wants to be.”