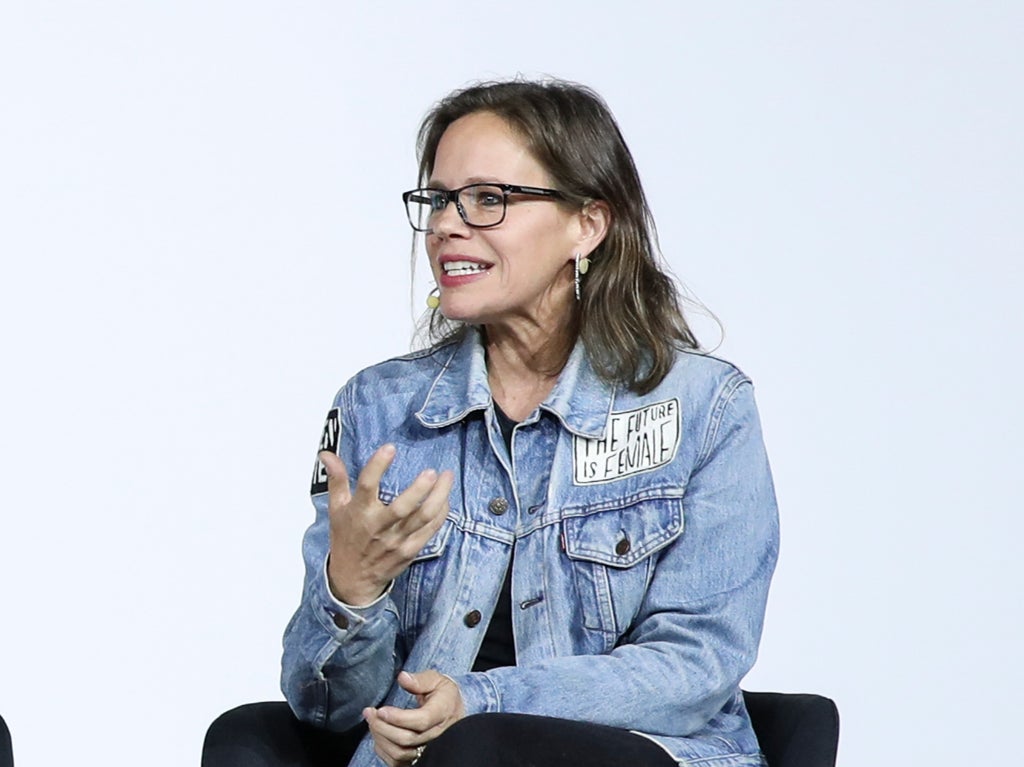 Levi’s brand president Jennifer Sey has claimed that she was fired from the denim company because she has been speaking out against Covid-19 school closures and mask mandates.

She’s also said that she rejected a severance pay of $1m that she was offered to stay quiet about the reasons for her dismissal.

The 52-year-old, who joined Levi’s after representing Team USA in gymnastics during the 1986 Goodwill Games in Russia, has been publicly critical of school closures and mask mandates since the beginning of the pandemic.

In a guest post on Bari Weiss’ Substack “Common Sense” on Monday, Ms Sey wrote a post headlined: “Yesterday I Was Levi’s Brand President. I Quit So I Could Be Free”.

She moved from California to Denver, Colorado last March to allow her four children to go to school in person and for them to have a “normal childhood”. She claimed that company staff have been pressing her to not speak out against public health measures.

After being made aware that she was on the path to becoming the next CEO of the company, she stopped criticizing Covid rules in November, but she was allegedly told in “the last month” that external pressure to fire her had made her situation at the company unsustainable.

“In the last month, the CEO told me that it was ‘untenable’ for me to stay. I was offered a $1 million severance package, but I knew I’d have to sign a nondisclosure agreement about why I’d been pushed out,” Ms Sey wrote.

“The money would be very nice. But I just can’t do it. Sorry, Levi’s,” she wrote. “I never set out to be a contrarian. I don’t like to fight. I love Levi’s and its place in the American heritage as a purveyor of sturdy pants for hardworking, daring people who moved West and dreamed of gold buried in the dirt.”

“But the corporation doesn’t believe in that now,” she claimed. “It’s trapped trying to please the mob — and silencing any dissent within the organization. In this, it is like so many other American companies: held hostage by intolerant ideologues who do not believe in genuine inclusion or diversity.”

Ms Sey said she was “condemned for speaking out” and that she “was called a racist — a strange accusation given that I have two black sons — a eugenicist, and a QAnon conspiracy theorist”.

“After all these years, the company I love has lost sight of the values ​​that made people everywhere want to wear Levi’s,” she wrote. “Early on in the pandemic, I publicly questioned whether schools had to be shut down.

“This didn’t seem at all controversial to me. I felt — and still do — that the draconian policies would cause the most harm to those least at risk, and the burden would fall heaviest on disadvantaged kids in public schools, who need the safety and routine of school the most,” she added. “In the summer of 2020, I finally got the call.

“You know when you speak, you speak on behalf of the company,” Ms Sey claimed she was told by the head of corporate communications, adding that she was urged to be quiet.

She wrote that she responded by saying: “My title is not in my Twitter bio. I’m speaking as a public school mom of four kids.”

“But the calls kept coming. Fromlegal. From HR. From a board member,” she wrote. “And finally, from my boss, the CEO of the company.”

Ms Sey said that her co-workers were not reprimanded for publicly criticizing former President Donald Trump, but that she was slammed for appearing on Fox News to bash school closures.

“Colleagues posted nonstop about the need to use Trump in the November election,” she said. “I also shared my support for Elizabeth Warren in the Democratic primary and my great sadness about the racially instigated murders of Ahmaud Arbery and George Floyd. No one at the company objected to any of that.

“I refused to stop talking. I kept calling out hypocritical and unauthorized policies, I met with the mayor’s office, and eventually uprooted my entire life in California — I’d lived there for over 30 years — and so that my kindergartner could finally experience real school,” she wrote.

“National media picked up on our story, and I was asked to go on Laura Ingraham’s show on Fox News. That appearance was the last straw,” she said.

Ms Sey said she was being prepared to take over as CEO, but that current company leader Charles Bergh told her that she had to stop speaking out concerning mandates if she wanted the job.

“In the fall of 2021, during a dinner with the CEO, I was told that I was on track to become the next CEO of Levi’s – the stock price had doubled under my leadership, and revenue had returned to pre-pandemic levels,” she said. “The only thing standing in my way, he said, was me. All I had to do was stop talking about the school thing.”

She stopped speaking out, but the social media attacks continued.

“Every day, a dossier of my tweets and all of my online interactions were sent to the CEO by the head of corporate communications,” Ms Sey claimed.

“At one meeting of the executive leadership team, the CEO made an off-hand remark that I was ‘acting like Donald Trump’. I felt embarrassed, and turned my camera off to collect myself,” she wrote.

“Today, Levi Strauss & Co announced management changes affecting our executive leadership team,” the company said in a statement to The Independent on monday. “Seth Ellison, EVP & Chief Commercial Officer will assume responsibility as the Levi’s® brand president on an interim basis in addition to his commercial duties, replacing Jen Sey, who resigned from the company.”

“LS&Co. has initiated a search for a new Levi’s® brand president, an opportunity to lead one of the world’s best known and most respected consumer brands,” the company added.