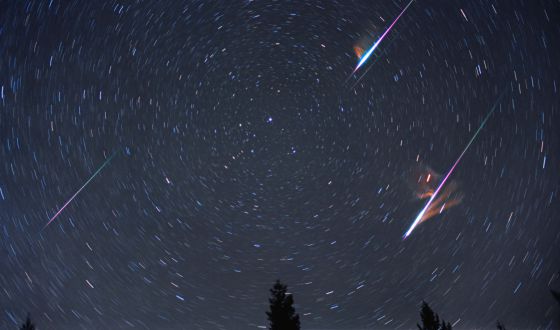 Between Tuesday 16 and Wednesday 17 November we can attend the Leonid Meteor Shower. We are almost on a full moon, so to enjoy them in the best possible way we will have to stay up late or get up quite early, taking advantage of when the moon sets at around 5:00. We can enjoy the meteors looking from the zenith of the sky to the east, where the constellation of Leo is located. About 15 shooting stars per hour are expected this year, far from the tens or even hundreds of thousands per hour that were reported in 1833, but it can still be spectacular. That said, since this is an astrophysics section, let’s talk a little about what a meteor shower like the Leonids tells us about the formation physics of the Solar System and about the cosmic dangers that threaten us.

The meteor shower that occurred in 1833 was called a storm because of its intensity and was quite famous in the United States, where it was said that more meteors were seen than normal stars during the peak of activity. At that time the meteor showers were attributed to atmospheric effects; in fact, several letters to US newspaper editors referred to the storm as electrical events high in the atmosphere. Another letter spoke of stars falling like snowflakes, something that is not far from reality, because today we know, after the studies that followed that great meteor storm, that the spectacular nature of the Leonids and what makes them special is the The result of a pinch of chance and another of luck, which we may not always have.

Just like when we are driving a car and we find a swarm of mosquitoes that leave us the car made a few foxes, the Earth this week will pounce at a speed of about 108,000 km / h on a swarm of icy dust particles left there by a comet called 55P / Tempel – Tuttle. This cosmic visitor was discovered in 1865-1866 by two “comet hunters”, the German Wilhelm Tempel and the American Horace Parnell Tuttle, just 33 years after the magnificent Leonid storm we talked about earlier. Only then was it confirmed that it was a star that periodically returned to the vicinity of the Earth, every those 33 years, and that in fact it had already been observed before in the fourteenth and seventeenth centuries, but no one had fallen that it was the same ball of ice dirty orbiting the Sun and closing in on us again and again. The confirmed periodicity is what justifies the name, that is why it is put a P, followed by the name of the discoverers.

The interesting thing about comet 55P / Tempel – Tuttle is that in its orbit, very elliptical and inclined, which starts from a distance similar to that which separates us from Uranus, it ends up approaching the Sun as much as the Earth’s orbit itself. In astronomical jargon, its perihelion occurs at little less than one astronomical unit, the perihelion being the point of closest approach to the Sun and an astronomical unit the average distance that separates the Earth from the Sun. In fact, this comet approaches the Sun only 3% more than the Earth, which is not little, it is about 3.5 million kilometers from our orbit.

That coincidence in the orbit of the comet has its consequences. Any star that passes through its perihelion reaches its maximum orbital speed, gravity works like this. In the case of the Earth, there is only a difference of 1 km / s between the maximum and minimum speeds (reached at perihelion and aphelion, respectively). But Comet 55P / Tempel – Tuttle goes 10 times faster when it is near the Sun than when it is at its farthest orbital point. In addition, at perihelion, the effect of both solar radiation and the particles that the Sun is continuously emitting, the so-called solar wind, is maximum. And this is when the aforementioned letter becomes interesting. The comparison is not at all unfortunate, because comets are actually big dirty snowballs or big icy dustballs. The snow they carry is not only water, but also carbon dioxide, methane and other compounds that we are used to seeing on Earth in a gaseous state, but that in the confines of the Solar System, beyond Jupiter, pass into a state. solid, forming comets.

When passing close to the Sun, comets like 55P / Tempel-Tuttle begin to fall apart, the snow goes directly from a solid to a gaseous state (it is said to sublimate), something that not only creates a kind of atmosphere around the comet, the so-called coma , but also ejects more or less violently and leaves bits of material scattered around the space (as the film shows very well Armageddon, although they confuse asteroid with comet continuously). This material is something that we see as the tails of comets when they are visiting us, but that in the end the comet leaves behind in a cloud of a size of tens of thousands of kilometers, composed of gas and icy dust particles a few millimeters in diameter. diameter, and that it reaches its maximum density near the perihelion of the cosmic traveler. That cloud is the one that we will find this week, the result of 55P / Tempel-Tuttle passes through perihelion in the more or less remote past, and the particles that form it will impact our atmosphere at speeds of the order of 250,000 kilometers per hour, of the highest that are observed in meteor showers.

Currently almost 5,000 comets are known, but it is estimated that there must be trillions of dirty snowballs orbiting the Sun. Many, most of them, will remain in the confines of the Solar System throughout the life of our star and our planet. But for one cause or another, by interactions with a planet X that may exist in that area, by some collision between them, or by a much more unlikely hostile action such as that of the arachnids of Starship Troopers, many of them travel and will travel towards the center of the Solar System and will pass more or less close to the Earth. Or near Jupiter, which is capable of changing their orbit and sending them towards Earth, as it did in the past to perhaps give us the water we have today.

Space is immensely large and it is very difficult for a collision to occur, but on the other hand, the universe not only has a lot of empty space but a lot of time ahead of it, so at some point the beautiful fireworks of meteor showers they can “burn” us, when the orbit of a comet passes too close to us. In fact, comets could be more dangerous than asteroids, which is what often appears in movies of cosmic catastrophes. There are many more, some with more chaotic orbits and extremely high speeds near perihelion. It is not a game, you have to be attentive and be proactive, but that is another story. For now, enjoy the Leonids and prepare for when the storm of these fleeting rages in 2031.

Pablo G. Pérez González He is a researcher at the Center for Astrobiology, dependent on the Higher Council for Scientific Research and the National Institute of Aerospace Technology (CAB / CSIC-INTA)

Cosmic Void It is a section in which our knowledge about the universe is presented in a qualitative and quantitative way. It is intended to explain the importance of understanding the cosmos not only from a scientific point of view but also from a philosophical, social and economic point of view. The name “cosmic vacuum” refers to the fact that the universe is and is, for the most part, empty, with less than 1 atom per cubic meter, despite the fact that in our environment, paradoxically, there are quintillion atoms per meter cubic, which invites us to reflect on our existence and the presence of life in the universe. The section is made up of Pablo G. Pérez González, researcher at the Center for Astrobiology; Patricia Sánchez Blázquez, Professor at the Complutense University of Madrid (UCM); and Eva Villaver, researcher at the Center for Astrobiology.

Be prepared for the climate changing – Malcolm Gunnyeon