Few cars ventured out at the start of the one-hour session – the only practice running available ahead of qualifying on the first sprint weekend of the season – before Valtteri Bottas and the Haas duo emerged after the opening five minutes had passed.

They were soon followed out by the rest of the pack taking to the circuit in dribs and drabs, with Alfa Romeo’s decision to send Bottas out first rewarded with the early first place benchmark as he warmed his tires ahead of those still coming out of the pits – all cars heading out first on the full wets.

Bottas’s initial fastest lap was at 1m43.277s, which was briefly beaten by Kevin Magnussen’s 1m42.539s on the Dane’s first flier, before Bottas came around again to move ahead on a 1m40.216s.

Many drivers had off track moments during the early running, with kerbs Variante Alta and the downhill braking for the first Rivazza proving to be particularly challenging – Leclerc spinning at the former with Lando Norris and Esteban Ocon sliding off into the gravel at the latter.

One driver not to have any early dramas was Verstappen, who posted a 1m39.595s on his first timed lap and duly moved to the top of the times, with 10 minutes completed.

Leclerc then surged ahead on a 1m39.325s before Verstappen responded with two better efforts that brought the quickest time down to a 1m36.158s.

As the first 20 minutes concluded, Leclerc moved back ahead with a 1m35.629s – after which he spun wildly through the Acque Minerali sequence, the championship leader putting his left-side wheels onto the kerbs at the exiting of the first part and then spinning through the second before getting going again.

Perez moved ahead on a 1m35.476s before a lull in proceedings around the halfway point preceded several drivers – including the Aston Martin pair – venturing out on the intermediates for the first time.

It took 15 minutes before a driver running the green-walled rubber topped Perez’s previous best, with Sainz the one to do it with a 1m33.716s and then saving a big sideways snap exiting the Tamburello chicane on the very next lap on his run, which nevertheless ended in another fastest time – a 1m32.606s.

Leclerc then used his sent of interest to move back ahead on a 1m32.512s – but only after he had half-spun exiting the Villeneuve on his out-lap.

The Monegasque driver looked set to go quicker again before he locked up and had to cut the Variante Alta sequence, after which he gave a tow to Sainz running down the pit straight as the Spaniard moved back into first place on a 1m30.803s.

Entering the final 15 minutes and Verstappen joined the fray on the interest, able to get closer to the Ferrari drivers during his early laps than the rest albeit a few seconds adrift in the 1m32s.

With just under 10 minutes remaining – after Verstappen had had to abandon a lap that would have resulted in a personal best after coming across Nicholas Latifi going slowly through the first Rivazza – Leclerc went back ahead on a 1m29.402s.

Verstappen was able to improve to a 1m30.867s – 1.455s off Leclerc’s best effort – ahead of the final minutes, which were disrupted by a brief red flag period after Norris spun off into the gravel at the final parts of Acque Minerali.

In a very similar incident to Leclerc’s earlier on, the McLaren driver touched the exit kerbs from the initial downhill right-hander, but went off faster and further – appearing to be stuck in the gravel and so race control stopped the session.

But Norris was able to quickly reverse away and the session resumed for the final two minutes, during which only Alex Albon set a personal best and Bottas went off into the Acque Minerali runoff as Leclerc and Norris had before him – stopping only just before the barriers . 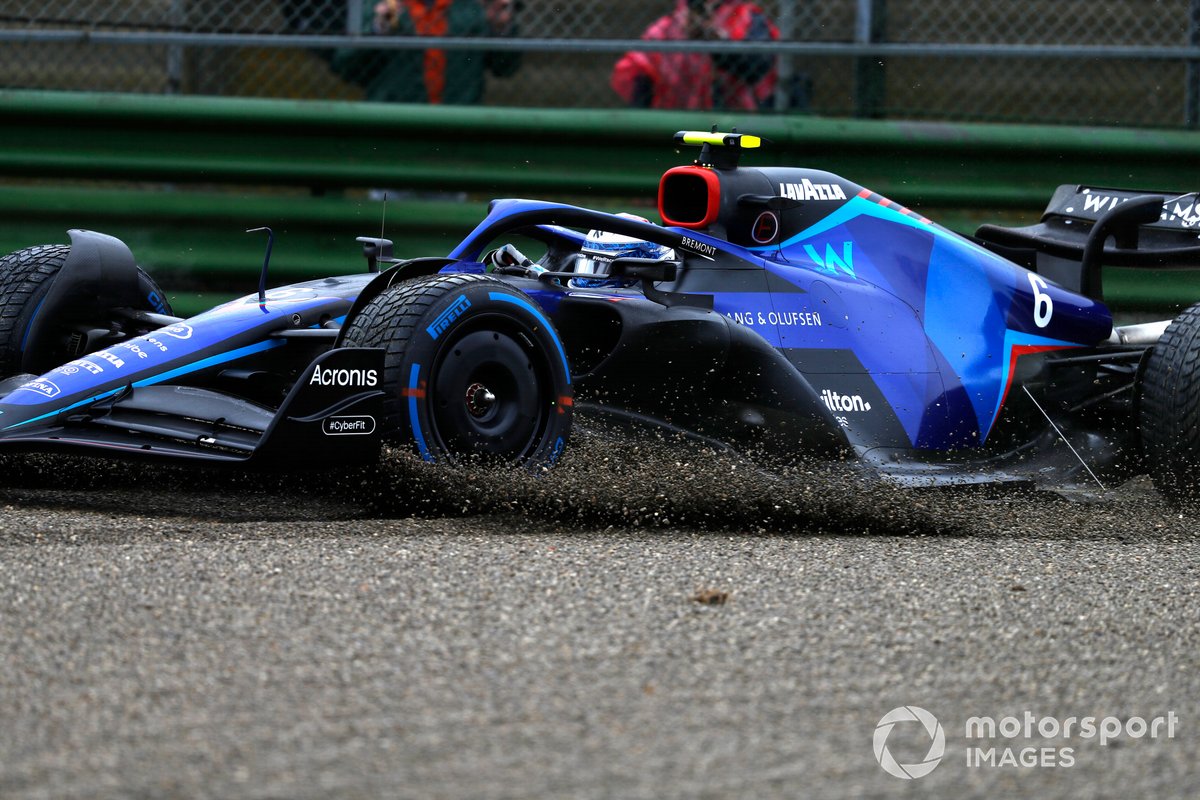 Albon’s improvement moved him up to 17th – ahead of Lewis Hamilton, with George Russell leading Mercedes’ charge at the end of top 10, the younger Briton’s car at one stage porpoising extremely at the end of the meandering main straight, sending sparks from its floor each time it hits the ground.

Hamilton was the only driver not to set a personal best on the interest, ending up just over seven seconds off Leclerc’s leading pace, with Russell over two seconds quicker.

Bottas ended up just outside the top 10, his late spin start in the same way as Leclerc and Norris, but with the wildest spin of all three and then getting stuck in the gravel as he tried to reverse away, the session already over.

The rest of the top 10 runners behind the top three were led by the Haas duo, with Magnussen and Mick Schumacher moving up the order shortly before the red flag.

Norris ended up 14th, as Latifi, who went off into the gravel at the Tosa hairpin during the early laps, bringing up the rear of the field.