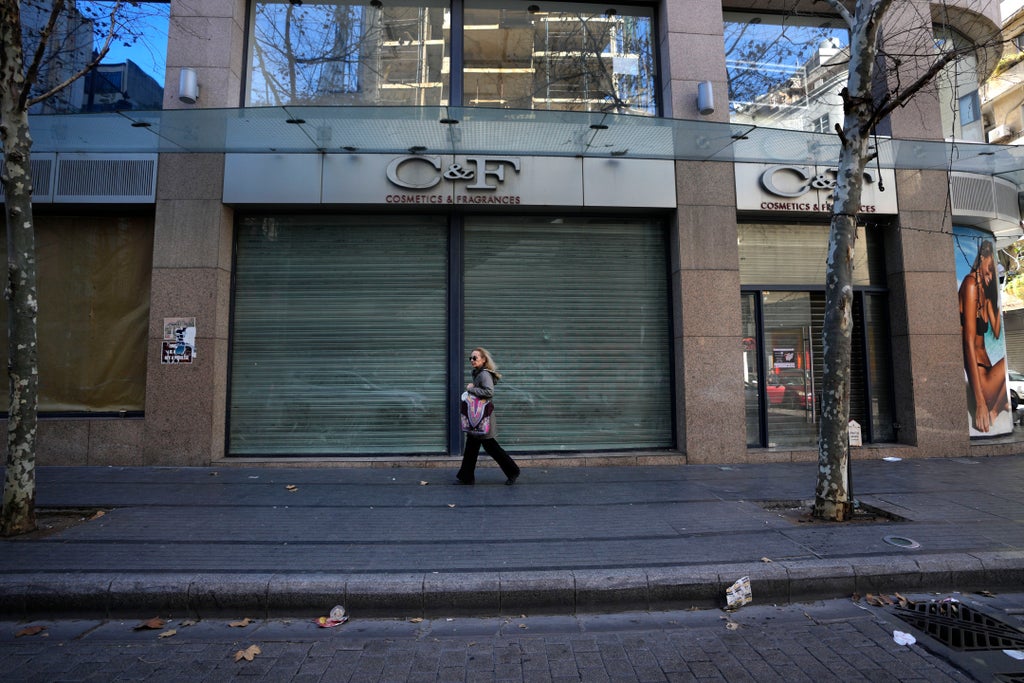 From his small music shop on Beirut’s Hamra Street, Michel Eid witnessed the rise and fall of Lebanon through the changing fortunes of this famed boulevard for more than 60 years.

Hamra Street represented everything that was glamorous about Beirut in the 1960s and 1970s, with Lebanon’s top movie houses and theaters, cafes frequented by intellectuals and artists, and ritzy shops. It saw a revival of the past decade, with international chain stores and vibrant bars and restaurants.

Now many of its stores are shuttered. Poverty-stricken Lebanese and Syrian refugees beg on its sidewalks. Trash piles up on its corners. Like the rest of Lebanon, the economic crash swept through the street like a destructive storm.

At 88 years old, Eid remembers the bad times, during Lebanon’s 1975-1990 civil war, when Hamra saw militias battling, assassinations at its cafes and, at one point, invading Israeli troops marching down the street. Nothing was as bad as now, Eid says.

“We have hit rock bottom,” he said. Few customers come to his Tosca Music Shop and Electronic Supplies, which sells records and a variety of electronic clocks, calculators and watches.

Lebanon’s economic meltdown was the culmination of the country’s post-war era. The war’s militia leaders became the political leadership and held power since. They ran an economy that at times boomed but was effectively a Ponzi scheme riddled with corruption and mismanagement.

The scheme finally collapsed, starting in October 2019, in what the World Bank calls one of the world’s worst economic and financial crises since the mid-1800s.

The currency’s value evaporated, salaries lost their buying power, dollars in banks became inaccessible, and prices skyrocketed. As much as 82% of the population now lives in poverty, according to the UN

A walk through Hamra Street shows the impact.

Many shops have shut down because owners could no longer afford high rents and huge monthly bills for private electricity generators. After nightfall, the shops that are still operating close early. Many streetlights don’t work because of electricity cuts. Once late-night Hamra feels deserted before midnight.

During its heyday in the 1960s and 1970s, Hamra Street was the elegant heart of Lebanon’s cosmopolitan pre-war era, Beirut’s Champs Elysees. Arab, European and American tourists flocked to its swanky shops, restaurants and bars.

Hamra had the capital’s finest movie houses. At its Piccadilly Theater, Lebanon’s most beloved singer Fayrouz performed. You might see the international diva Dalida strolling down the avenue before one of her shows from her. World stars held concerts in Lebanon, including Louis Armstrong and Paul Anka.

Located in the capital’s western neighborhood of Ras Beirut, Hamra was — and still is — a place where Christians and Muslims live side by side. Its cafes were hangouts for artists, intellectuals and political activists, caught up in the leftist, secular, Arab nationalist spirit of the times.

“Hamra Street is an international avenue,” says Mohamad Rayes, who has worked on the street since the early ’70s and owns three clothes and lingerie shops in the area.

He spoke sitting in a café that, in the 1970s, was called the Horse Shoe. He pointed to a corner where two of the greatest Arab singers of the time, Abdel-Halim Hafez and Farid el-Atrash, had a regular seat, along with Nizar Qabbani, an iconic romantic poet from Syria.

After the war, the center of Beirut’s international commerce and shopping moved to a newly renovated downtown. But Hamra Street saw a major facelift in the early 2000s, with new water, sewage and electricity systems.

That fueled a revival the past 15 years. International chains like Starbucks and Nike opened stores. New restaurants flourished, including ones opened by Syrians fleeing their country’s civil war.

The new wave pushed aside many of the area’s pre-war icons. Its famous cafe Modca was replaced by a bank. A McDonald’s stands in the place of Faisal Restaurant, where Arab leftists eleven huddled over glasses of arak liquor and dishes of appetizers. The Piccadilly Theater was abandoned.

But the street attracted a new generation of young people of all sects, bringing the progressive spirit of the 2011’s frustrated Arab Spring. Once again, the street range with bars. One club, Metro Medina, drew young crowds with retro live shows of old Arabic music from the past century.

Hamra remains busy during the day. Thousands come for treatment at its medical centers or to study at the nearby American University of Beirut, one of the Middle East’s top educational institutions.

But “Hamra is not the Hamra of the past,” said Elie Rbeiz.

The 70-year-old Rbeiz has been a hairdresser for the elite in Hamra since 1962. He counted among his regular clients the late Saudi businessman Adnan Khashoggi, who once flew Rbeiz to London on a private jet for a cut. Rbeiz expanded his business 20 years ago to include men’s clothes.

Now in the economic crisis, his sales have dropped 60%.

Still, Rbeiz believes Hamra will bounce back. He said his shop was blown up during the civil war and he renovated and reopened. “I did not surrender then and will not surrender now. Never.”

Not everyone is so certain.

Eid opened his music store in Hamra in 1958. He’ll close it when he stops working, he said. His two sons of him live abroad; if they don’t want his 4,500 records of him, many of which are collectors’ items, he’ll donate them.

But he won’t leave.

“Hamra Street is the oxygen that I breathe,” he said. “I grew up on Hamra Street and will end my life here.”