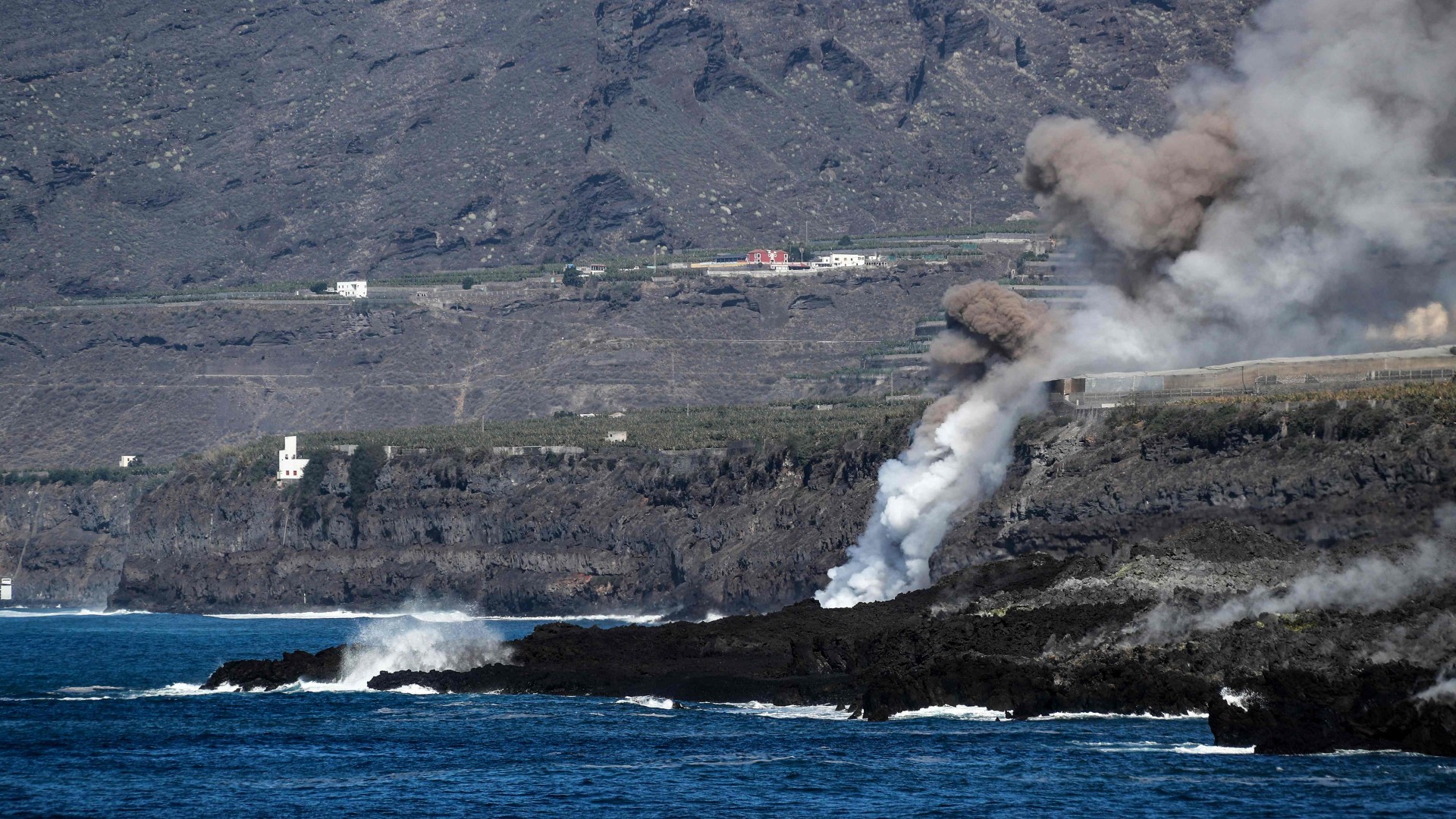 The lava from the Cumbre Vieja volcano, which has been erupting since September 19, has reached the sea at a new point, further north of the previous fajana and closer to the port of Tazacorte. The authorities, in a preventive manner, have ordered the confinement of about 3,000 people, which will be kept at least 24 hours in the populations of Tazacorte, San Borondón and the scattered area from El Cardón to Camino los Palomares against possible emanations of gases harmful to health.

The Volcanological Institute of the Canary Islands has confirmed that the lava that has reached the sea is the one that advanced above lavage number seven, which this weekend has been the most active and that after joining lavage four, between the mountains of Todoque and La Laguna, has finally reached the sea around 12:01 on this Monday, at a point located further north of the first delta that began to form on the night of September 28.

“ #RashLaPalma | (12:00 hour )
The lava begins to fall into the sea at another point on the coast of Tazacorte, closer to the port.

The technical director of the Canary Islands Volcanic Emergency Plan (Pevolca), Miguel Ángel Morcuende, explained that the Military Emergency Unit (UME) is making gas measurements in the area where pour number seven has reached the sea this noon. The Juan XXIII school in Tazacorte will carry out its classes in a online from this Tuesday until the confinement is lifted.

Morcuende has recognized that the Pevolca did not expect the lava to reach the sea so soon in this area. The other flows remain stable, with contribution by lava tubes in 1, 2 and 9, which have practically joined.

From the beginning of the eruption, the island of La Palma has grown by 43 hectares due to the lava deltas or strips created by the lava when it reaches the waters of the Atlantic Ocean, according to the latest data published by the European satellite system Copernicus, which Efe collects.

Although the sulfur dioxide emissions they have marked a minimal since eruption beganBetween 900 and 1,300 tons per day, the wind from the west and southwest has caused air quality problems in the municipalities to the east of the island, mainly Santa Cruz de La Palma, Breña Alta and Breña Baja.

For this reason, Pevolca has extended to those municipalities the recommendations that were applied to the population of the Aridane Valley since the beginning of the eruption: use of FFP2 masks due to the presence of particles smaller than ten microns and that the most sensitive population should go out to the street as little as possible.

Scientific spokesperson Carmen López recalled that it is still early to draw conclusions about the decrease in the emission of sulfur dioxide, highlighting that this parameter registers great variability and it will be necessary to wait for the measurements of the next few days to evaluate the evolution of sulfur dioxide. sulfur, which in any case maintains a downward trend since September 23.

The airport remains inoperative this Monday due to the ashes

The volcano on the Canary Island of La Palma enters its ninth week of activity this Monday, 64 days in which it has affected a total area of ​​1,065 hectares, according to the European Copernicus satellite program. The latest estimates from the cadastre on the affectation of the lava point to 1,481 damaged buildings, of which 1,193 are residential, 159 agricultural, 67 industrial, 34 leisure and hotel and 28 other uses.

While the Ash accumulation keeps La Palma airport inoperative for the third day, as reported by the airport manager AENA. The airline Binter maintains this Monday the suspension of its operations with the island pending the evolution of the volcanic ash.

Given the weather forecast, with winds from the southwest component, it is expected that the incidents in aeronautical operations continue in the next 24 to 48 hours, as Pevolca spokesmen have exposed at a press conference.

The Scientific Committee has reassessed the magnitude of the eruption of the La Palma volcano, which has gone from a value of two (out of a total of eight) to three, without this implying that there is greater explosiveness or that there is some variation in the strombolian mechanism of the natural phenomenon.