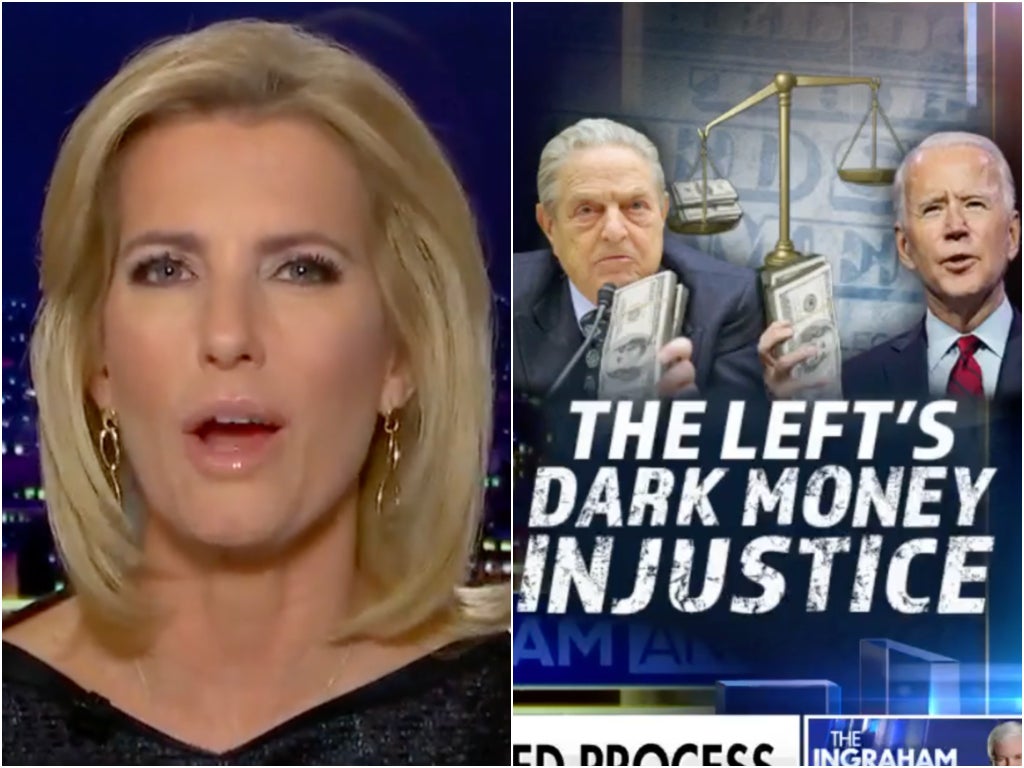 Social media users were quick to criticize Ingraham and Fox News, with one Twitter user saying it was an example of “incredibly blatant anti-Semitism” from a “despicable low life”.

“Although many people like money and fame, the explanation of Occam’s razor for those like [Tucker] Carlson and Ingraham is that they are just terrible people. There may be complex psychological reasons why they’re terrible, but in the end, the ‘why’ doesn’t really matter.” the atlantic writer Tom Nichols wrote.

Ingraham claimed that Democrats are using “dark money” to control the Supreme Court.

Justice Stephen Breyer announced his retirement on Thursday. He will serve the remainder of this term, and President Biden has pledged to nominate a black woman to replace him.

The Fox News anchor said Democrats will quickly push for a candidate “because that’s what the dark money trolls on the left want.”

Senate Republicans blocked President Barack Obama from replacing Justice Antonin Scalia after his death in 2016, arguing that no Supreme Court justice should be replaced in an election year.

When Justice Ruth Bader Ginsburg died in the fall of 2020, Republicans put Justice Amy Coney Barrett on the bench in less than two months. Then-Senate Majority Leader Mitch McConnell argued that the situation was not similar to 2016, even though both were election years, because unlike 2016, Republicans controlled both the White House and the Senate. in 2020.

“From the beginning, the push to get Judge Breyer removed has been spearheaded by a shadowy network of…dark money groups that are working to subvert, not just change or add to our judiciary, but change our entire judiciary. justice system. government and, frankly, our entire way of life,” Ingraham said.

“It’s a leftist cartel that we warned you about more than a year ago,” he said. “Meet the opaque funding group called Demand Justice, which is really just a front group for the Sixteen Thirty Fund. Demand Justice is led by former Clinton campaign spokesman Brian Fallon, who yesterday revealed how this group bullied Breyer off the court and how they want the court to help validate a far-left wish list of radical policies from climate to gun control.”

“A year ago, we began calling publicly for Judge Breyer to resign,” Fallon told MSNBC. “What I hope will happen is that this opens people’s minds to what’s possible in terms of what the Supreme Court could be, what it could look like, and we start to be a little bit more bold and imaginative. In reaction to rulings coming in June on issues ranging from abortion to gun safety to the ability to regulate greenhouse gases … that will be an occasion for Democrats to see the need to support court expansion.

“Now, remember, they’re not even trying to pretend that this nomination involves complex questions of statutory interpretation, philosophy or constitutional analysis,” Ingraham said. “There is only one thing that matters to these activist vultures who are still hovering over Breyer on site instead of on the bench: using the court to do what Congress doesn’t have the votes to enact. That’s what they want. The best name for the Demand Justice group would be Demand Revolution.”

According to the research group Open Secrets, the term dark money “refers to spending intended to influence political outcomes where the source of the money is not revealed.”

Soros has publicly donated $125 million to the Democracy PAC political action committee ahead of the 2022 midterm elections, Politico reported.

The investor said in a statement that the funds are intended to advance “pro-democracy causes and candidates, regardless of political party” that support “strengthening the infrastructure of American democracy: voting rights and civic participation, civil rights and liberties, and the rule of law”.

He added that it was a “long-term investment” intended to be used beyond this year.

In a separate statement, PAC Chairman Alexander Soros, son of Mr. Soros, mentioned the Capitol riot on January 6 last year, as well as “ongoing efforts to discredit and undermine our electoral process,” which ” they reveal the magnitude of the threat to our democracy.”

He said this “is a generational threat that cannot be addressed in just one or two election cycles.”