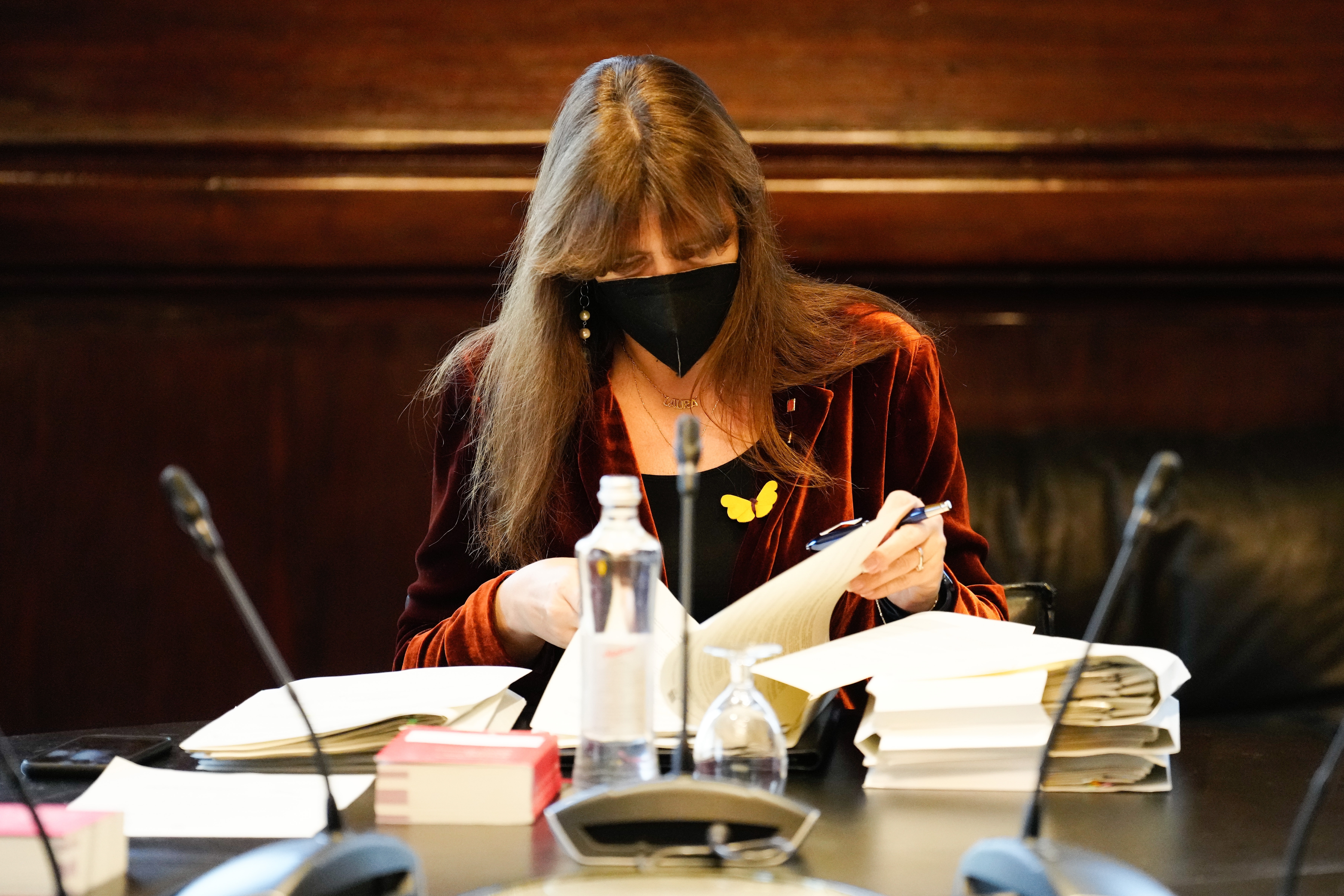 Junts per Catalunya waves the flag of the purest independence movement. It is the one that defends the validity of the result of the unconstitutional self-determination referendum of 2017 and the subsequent unilateral declaration of independence. Carles Puigdemont is its leader and Laura Borràs, the president of the regional Parliament, its mallet. His creed is that Catalonia has been independent since 2017 and now only it is necessary to “make it effective”. For this, it is inevitable to disobey the laws and orders of the State institutions, because only the Catalan Parliament is sovereign in Catalonia. The maxim is easy to say, but difficult to apply. Borràs has been able to verify this this week by withdrawing the act of deputy from a CUP representative condemned by the Central Electoral Board (JEC).

In Esquerra Republicana (ERC) they had it sworn to Borràs. His invectives against ERC have been recurrent, accusing the party headed by Oriol Junqueras of bowing to the “repressive state”. His main objective has been his predecessor in the presidency of the Parliament, Roger Torrent, since he considered a telematic investiture as president of the Generalitat de Puigdemont, resident in Belgium to avoid being tried in Spain, unfeasible in 2018. Justice prevented it and Torrent did not want to disobey. Borràs showed in his 2021 book Filla de l’1 d’october the discomfort caused by the refusal of the current Minister of Business of the Generalitat: “As President of Parliament, Torrent, unlike President Carme Forcadell, who accepted the expression of the people at the polls with all the consequences, preferred not to put the table at criminal risk”.

Forcadell was sentenced in 2019 to 11 and a half years in prison for a crime of sedition by allowing laws declared unconstitutional to be processed and voted on. Torrent acted differently. “We regretted the message that we were giving to Madrid”, Borràs writes in his book, “the message that the repression worked, that the repression permeated the interior of people with a responsibility”. In his inaugural speech, in March 2021, Borràs assured that he wanted to follow Forcadell’s example: “My goal is to continue the work where she left off, because no court or prison will make us give up our ideas” . Four years later, the leader of Junts has acted like Torrent by withdrawing the deputy act from Pau Juvillà. Thus, the parliament complied with the six-month disqualification sentence against Juvillà issued last December by the Superior Court of Justice of Catalonia (TSJC).

See also  Prince Harry 'will go out of his way' to not criticize Queen in memoir, says expert

Juvillà was secretary at the Chamber table representing the CUP. He had been sanctioned by the Electoral Board for refusing to remove some yellow ties from the window of his office in the Lleida City Council in 2019, where he was a councilor. The ties, an emblem of solidarity with the pro-independence leaders condemned by the Supreme Court, were hung during the electoral campaign for the general elections that year. The JEC considers that they were a partisan symbol in favor of the pro-independence candidates and that, therefore, they could not be displayed in a public building.

The independence movement has based its exponential growth on building an imaginary in which Spain is a dictatorship with more political reprisals than any country in the world —except China. Juvillà himself raised last January in an interview on TV3 to 4,000 people persecuted in Catalonia for being independentists. EL PAÍS reported in 2021 that this propaganda figure — at that time it was slightly higher than 3,000 — is nourished, for example, by the more than a thousand injured that, according to the Generalitat, caused the police charges during the 1-O referendum, of another 450 injured during the altercations after the sentence against the independence leaders of 2019, or of the 700 mayors who were denounced for collaborating in the 1-O. ERC not only agrees with this figure, it also argues that the 4,000 must be amnestied —in the vast majority of cases it would be impossible because they have not gone through any judicial process—. The republicans also consider that Juvillà did not commit any crime, but they have taken advantage of the occasion to settle scores with Borràs.

“Enough is enough!” he wrote last Saturday on Twitter. Dionis Guiteras, mayor of Moià and spokesperson for ERC in the Barcelona Provincial Council. Along with his words, Guiteras shared the video of some statements by Borràs in which he criticized Torrent. The parliament withdrew in January 2020 the act of deputy to the president of the Generalitat Quim Torra. This had been sanctioned by the JEC and disqualified, a decision endorsed by the Supreme Court, for refusing to remove a banner from the balcony of the Palace of the Generalitat during the electoral campaign. Asked if she had withdrawn Torra’s deputy act, Borràs assured in the video: “Clearly, she would not have withdrawn it. But not because he is disobeying, but because he would be being scrupulously obedient to Parliament’s mandate.”

Borràs had not adhered to the parliamentary sphere in putting pressure on ERC: last December he reproached the Minister of Education, the Republican Josep Gonzàlez-Cambray, for not assuming the judicial consequences of not complying with the ruling of the TSJC that requires giving a 25% of subjects in Spanish in schools in Catalonia. Junqueras himself ended up charging against Borràs last Saturday: “You all know that there were those who criticized the actions of Parliament President Roger Torrent in his day, who acted after a final ruling by the Supreme Court. In this case, the president of the Parliament has decided to act long before there is a decision from the Supreme Court”.

The president of the Parliament had the support of the three pro-independence groups to suspend the activity of the Chamber as a sign of protest – this was the case for two days. But what these parties did not know until the end of last week is that Parliament had already withdrawn Juvillà’s seat. ERC has asked Borràs to clarify whether he hid knowing that he was no longer a deputy. The plenary session came to approve on Thursday an opinion of the Commission of the Statute of the Deputy by which they promised to keep Juvillà in his seat as long as it did not entail criminal consequences for parliament officials. The CUP then asked that Juvillà be able to delegate his vote, something that Borràs rejected because it would have meant acknowledging that he kept the seat.

Borràs confirmed this Monday in RAC1 that he proposed to the president of the Generalitat, Pere Aragonès, a joint strategy of disobedience to keep Juvillà’s seat. The leader of Junts did not detail what this “collective and ambitious” plan that Aragonès rejected consisted of. Borràs charged again against ERC and the CUP because, in his opinion, they had left him in the lurch. “The request of the Juvillà voting delegation was only intended to send Borràs, I don’t know if to the trash can of history or to the trash can of the Penal Code,” said Jaume Alonso-Cuevillas, deputy and lawyer for Junts, on the chain Ser: “I told her to do what she wanted, but that I thought it made no sense, that they were leaving her absolutely alone and that she would bear the criminal consequences alone.”

Cuevillas was removed by Junts from the Parliament table in April 2021 for having expressed in an interview his doubts about the strategy of parliamentary confrontation with State institutions. “I don’t know if it makes sense for them to disqualify you for having processed a resolution that leads nowhere,” Cuevillas said at the time: “Does it make sense for them to disqualify us without penalty or glory for nonsense?”