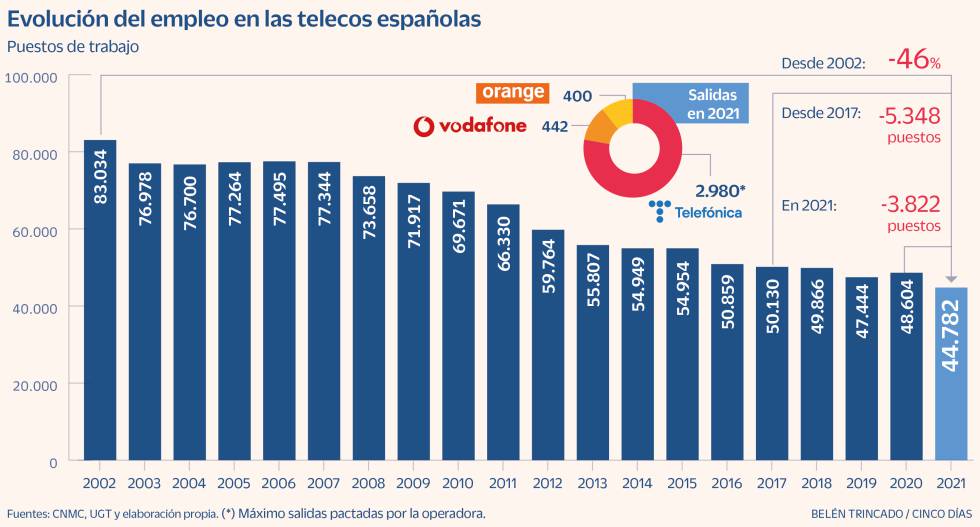 The large Spanish telecoms have launched or announced employment adjustment plans in 2021 which, as a whole, will mean the reduction of almost 4,000 jobs, about 8% of the total workforce of the operators. In the last 20 years, the total workforce in the sector has fallen by more than 40%, with a decrease in the income of the sector of more than 30% in little more than a decade.

The latest movement is led by Telefónica, which yesterday signed with the unions a new social employment plan that includes a voluntary redundancy plan (PSI), which will mean the departure of around 2,700 people, according to the company. However, departures could reach 3,000, out of a group of potential applicants of 4,532 people, who meet the requirements (born in 1967 and previous years with 15 years of experience in the company).

Previously, Vodafone Spain and the unions agreed on an employment regulation file (ERE) for a maximum of 442 employees, 10% of the workforce. Along the same lines, in June, Orange and the unions agreed to a voluntary ERE for about 400 workers, almost 11% of the teleco’s workforce that was affected by the plan.

In parallel, beyond the telecom services sector itself, Cellnex agreed a few days ago a voluntary employment regulation file for its subsidiaries in Spain, Retevisión, Tradia and On Tower, which will affect 252 people, under a double modality : early retirement and income plan.

On the contrary, some of the new operators have expanded their workforce in line with their growth. Among these companies, Digi stands out, which currently has a workforce of almost 3,000 people.

The truth is that the workforce adjustments of the large telecos are a consequence of the progressive deterioration of their income statements, derived, to a large extent, from the strong competition in the sector, and the advance of the low cost.

Vodafone, for example, pointed out that its adjustment, linked especially to commercial areas such as stores, was a structural measure to face the challenging conditions of the Spanish market, and at the same time boost the competitiveness and sustainability of the business. Orange, in turn, warned in the presentation of its ere that the telecommunications sector has been chaining revenue losses for years as a result of the hyper-competitiveness of the market and the multiplicity of players low cost.

In this sense, Telefónica also pointed to the worsening of the results in the presentation of its social employment plan and the retirement plan. In fact, in the third quarter of the year, oibda fell 8.9%. The teleco pointed out that future challenges entailed the need to face a resizing according to the activity.

In this scenario, the telecoms have not stopped insisting on the need for regulatory changes to be approved that allow them to face consolidation processes in the face of this worsening of the results. The operators, likewise, recall that, while revenues fall, they must face heavy investments in the deployment of new networks such as 5G, which includes contributions in the purchase of spectrum. The big three, for example, jointly pledged about 1 billion in the July auction.

Unions have also been very critical in recent years with European and Spanish regulation. The UGT, for example, has criticized the current regulatory model on different occasions, which has as its sole objective the reduction of rates through the promotion of competition.