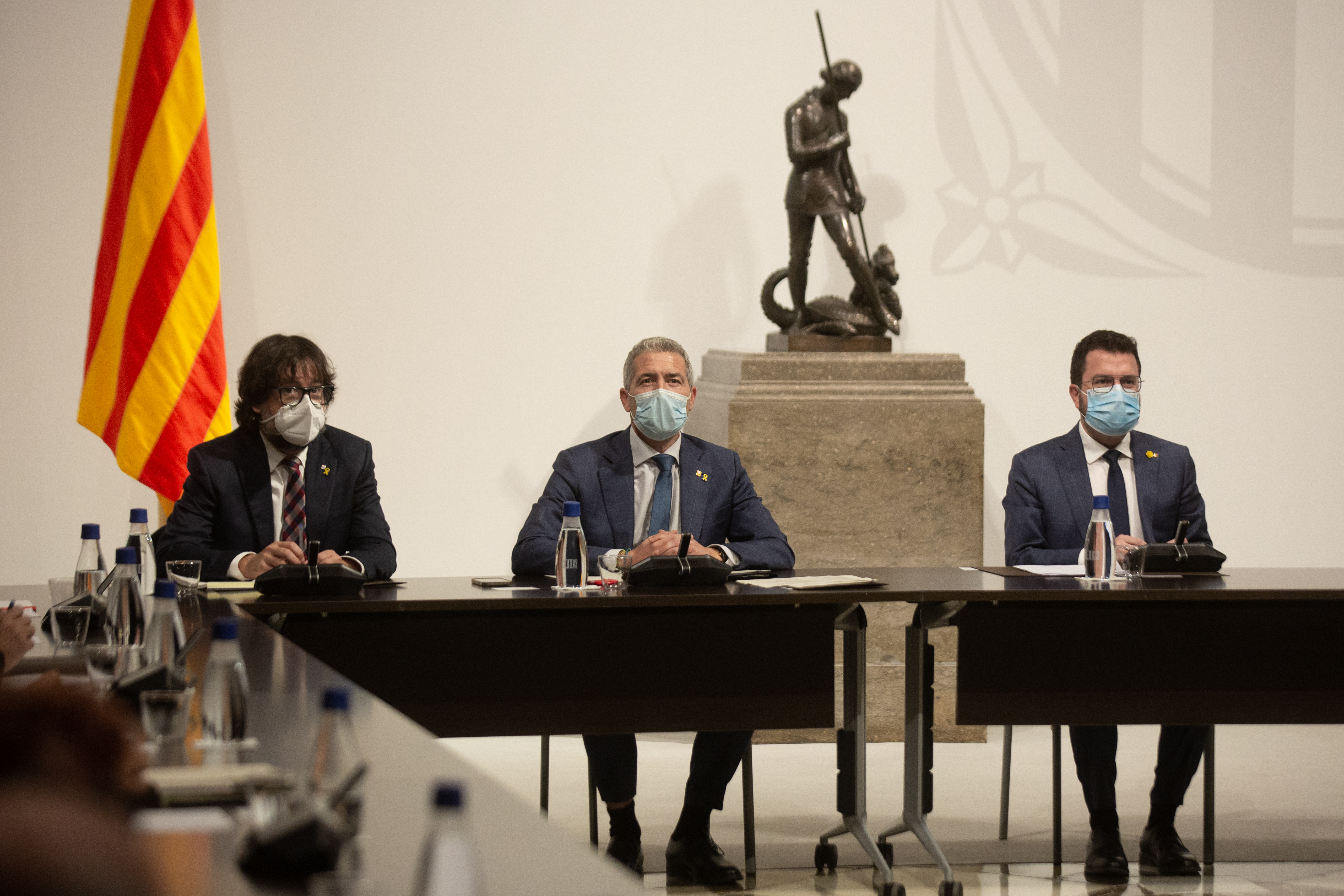 Linguistic immersion in Catalonia has been a political battlefield since the Supreme Court confirmed last November that it is mandatory for Catalan schools to teach at least 25% of their subjects in Spanish. The pro-independence parties are weighing formulas to avoid the sentence. The President of the Generalitat, Pere Aragonès, and the Minister of Education, Josep Gonzàlez-Cambray, announced this Thursday a battery of measures to avoid increasing the hours in Spanish in general in the school system. The most striking decision is the increase in teachers in schools: in the classrooms that have to be taught in Spanish, there will be two teachers, one of them to serve students who require it in Spanish and the other in Catalan.

Aragonès and Gonzàlez-Cambray have met at the Palau de la Generalitat with more than 40 organizations from the world of education in Catalonia. Among the participants in the conclave were also the unions Commissions Workers and UGT, the UNESCO Center of Catalonia, or entities of Catalan nationalism such as the Catalan National Assembly (ANC) and Plataforma per la Llengua. These institutions have supported the announced measures, which will be approved by decree. Both the president and the Minister of Education are members of Esquerra Republicana (ERC); its coalition partner, Junts, has been represented by Ricard Font, secretary general of the vice-presidency.

Gonzàlez-Cambray has not specified how the work of the two teachers would develop, he has only pointed out that each school would decide how to apply the system with the aim that the tandem allows a “more personalized” teaching to the students than in the class need to learn in Spanish. The Minister of Education has specified that at the moment this will mean hiring 35 teachers, which is the number of cases in which there are sentences to increase teaching hours in Spanish. Gonzàlez-Cambray has taken for granted that this strategy does not conflict with the obligation indicated by the Supreme Court that students in the classrooms concerned receive the subject in Spanish.

Aragonès has affirmed that “an attack on one of the pillars of coexistence in Catalonia, the language” is taking place. The president has reported that they will carry out a new crash plan to promote the use of Catalan in schools because, according to data from the Generalitat, this is in decline. Aragonès explained that the University of Barcelona will carry out an exhaustive study on the use of Catalan in the 4,000 schools and institutes in Catalonia. The Department of Education will also intensify the work of the Generalitat’s body of inspectors to ensure that the hours of classes in Catalan are not reduced. “We have given orders to the body of inspectors to guarantee the current model,” said Aragonès, “if the math class has to be done in Catalan, it will be done in Catalan.”

ERC and Junts consider that the Castilian sentence is an attack on a successful educational model and a violation of autonomous power. Despite this, the two parties have collided in the strategy to follow. Junts has even raised the possibility that the Executive disobeys the judicial imposition, and has branded Gonzàlez-Cambray as not very brave. “This is not about improvised or magical solutions or wanting to charge the autonomy of the centers. This will generate consensus to defend linguistic immersion and that is what the Government will do ”, said Aragonès last Monday. Neither the president nor Gonzàlez-Cambray have mentioned the possibility of disregarding the decisions of the courts.

Impulso Ciudadano and the Bilingual School Assembly, two entities in favor of introducing more hours of Spanish in the Catalan school system, have announced that they will work to control that schools comply with the 25% obligation, in addition to accompanying families who so wish in the administrative process of demanding the application of the percentage. Both organizations have been among the most active in defending the 2020 judgment of the Superior Court of Justice of Catalonia (TSJC) that imposed a minimum 25% of Spanish in Catalan schools. This ruling is the one ratified this fall by the Supreme Court.

The case of Canet de Mar

The Turó del Drac school in Canet de Mar (Barcelona) has been the scene in recent weeks of a bitter political confrontation as a result of the judicial order that requires 25% of the classes to be taught in Spanish in one of its courses. Serious insults and threats were made on social media against the family that requested the measure. The Family Association (AFA) of the school has defended in a statement that neither the daughter nor the parents of the family who sought protection in court have suffered harassment at the school. “We feel used, defamed and sad because a false story is being generated that does not correspond to the cohesive atmosphere that is breathed in our school,” says the association.

“We want to flatly deny that there is a movement of harassment, isolation and attack against any child or family,” affirms the AFA. The parents received the protection of the Superior Court of Justice of Catalonia (TSJC) so that their daughter could receive more teaching hours in Spanish. The Mossos d’Esquadra offered protection to this family and have also established a surveillance system around the perimeter of the school. “I am about to stone this child’s house. Let them go outside of Catalonia ”, wrote last week on social networks Jaume Fàbrega, former professor at the Autonomous University of Barcelona. “This child has to find himself alone in class. During the hours in Spanish, the other children should go out ”, published Albert Donaire, moved and pro-independence activist. Unlike what happened on previous occasions, this time the Government entered fully. The Minister of Education, Josep Gonzàlez-Cambray, went to the school last week, but did not contact the girl’s family.

“Ours is a diverse and plural school that has never allowed, much less promoted, discriminatory attitudes of any kind. As representatives of families, we firmly reject any show of intolerance or disrespect, ”writes the AFA.

The collective representative of the parents of the school also criticizes the judicial resolution and says that it cannot remain neutral in the face of the imposition of 25% in Spanish in a classroom of infant courses: “As AFA we cannot be equidistant with a sentence that puts in The educational and linguistic project that has been democratically agreed upon and that undermines the participation bodies of our educational center is in danger ”.