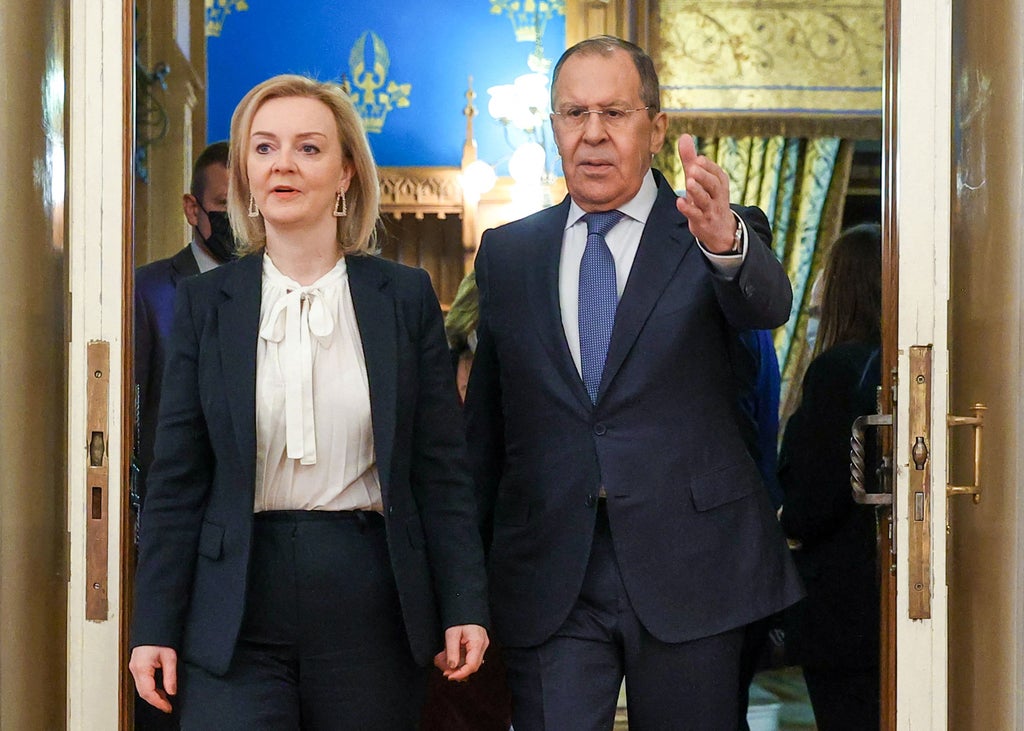 Russia’s media has been scathing in its analysis of British foreign secretary Liz Truss, calling her visit over the Ukraine crisis a “complete failure” and claiming that Moscow finds it easier to hold diplomatic discussions with Kiev than London.

The meeting between Ms Truss and her Russian counterpart Sergei Lavrov on Thursday was testy and ultimately unproductive, as the Russian minister taunted her, dismissed her demands, and even accused her of lacking knowledge about basic geography.

Ms Truss – the first British foreign secretary to visit Moscow in four years – met Mr Lavrov to urge Russia to withdraw its troops from the Ukrainian border, with the threat of “severe sanctions” if it invaded its neighbour.

The Russian foreign minister did not take kindly to the message, accusing Ms Truss of showing off and refusing to listen. He said their meeting was like a conversation between mute and deaf people, and that facts they produced “bounced off” British officials.

If Mr Lavrov was infuriated, then Russia’s leading newspapers were indignant.

tabloid Moskovsky Komsomolets said the talks were a “complete failure” and suggested that there could have been a fist fight if “Liz Truss was a man”, accusing her of only coming to Moscow to “show off, to show how macho she is”.

The newspaper did not stop there, however, saying that Russia can discuss things with the Americans, French, Germans and “even the Ukrainians”, but claiming that “we can only argue with the British now”.

“Thanks for coming Liz. I was about to write ‘Come again’, but that would have been too cynical and insincere,” the paper said.

the Kommersant newspaper referred to Ms Truss as “Lady No” and said that the foreign ministers “didn’t hear each other”.

Ms Truss raised a few eyebrows when she posed for photos in Red Square clad in a fur coat and hat that drew parallels with Margaret Thatcher’s attire during her visit to Moscow in 1987.

Unsurprisingly, Russia’s state mouthpiece did not let this go unnoticed.

“Liz Truss was clearly ready for a cold atmosphere,” said the official gazette Rossiyskaya Gazeta. “She got off the plane wearing a fur coat and fur hat, even though there was a thaw in Moscow when our English guest arrived.”

It was Kommersant that yesterday revealed Ms Truss’ most awkward moment of the talks – during a closed-door exchange – when she apparently mixed up her geography and said the UK would never recognize Russia’s sovereignty of Rostov and Voronezh, two regions in Russia. The foreign secretary had to be corrected by her ambassador in front of Mr Lavrov, according to the report.

Speaking later to Russian paper RBCMs Truss said she had mistakenly thought Mr Lavrov was talking about areas of Ukraine.

Just last week, Ms Truss was mocked by Russia’s foreign ministry for apparently confusing the Baltic and Black seas, which are more than 700 miles apart.

“If anyone needs to be saved from anything, then it is the world from the stupidity and ignorance of Anglo-Saxon politicians,” spokeswoman Maria Zakharova wrote on Facebook.

Following Ms Truss’ failure to make a breakthrough, British defense secretary Ben Wallace arrived in Moscow on Friday to meet with his Russian counterpart as fears grew that conflict could break out imminently.

US Secretary of State Anthony Blinken on Friday said Russian was sending more troops to the Ukrainian border and said an invasion could happen “at any time”.