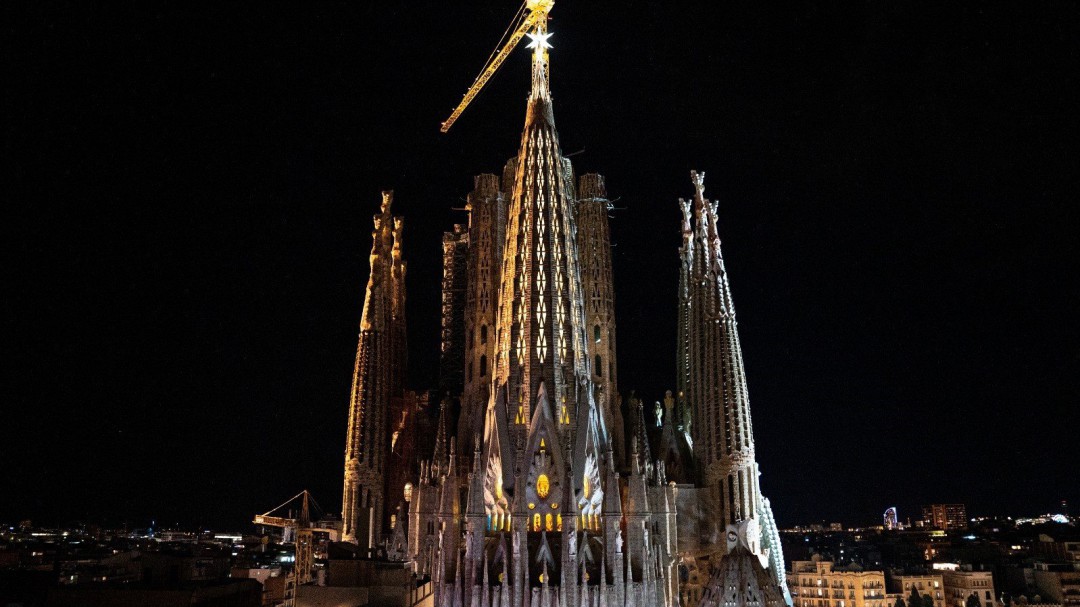 The Sagrada Familia, the temple that the Catalan capital has been building since the 19th century and the second most visited monument in Spain, unveiled its spectacular 138-meter high tower of Mary, crowned with a 5.5-ton luminous star. , which has forever changed the profile of the city of Barcelona.

The Archdiocese of Barcelona and the city have lived today a historic day of celebrations for the milestone reached in this nineteenth-century work, of which 25 percent remains to be built and which is expected to be finished in 2032, coinciding with the 150th anniversary of the laying of the first stone by Bishop José María Urquinaona on March 19, 1882.

At dusk, and with thousands of people gathered outside the temple on a cold and windy afternoon, the Archbishop of Barcelona and president of the Spanish Episcopal Conference, Cardinal Joan Josep Omella, has blessed the tower and the star that illuminates, designed by the architect Antoni Gaudí. It had been 45 years since the Sagrada Familia had inaugurated a new tower.

The star of the tower of Mary, blessed on this day of the Immaculate Conception, has twelve pyramidal points, will reflect the sun’s rays during the day and will be illuminated from the inside with LED light at night on special days.

The star, in which 1.5 million have been invested, is made of textured glass with a stainless steel structure on the edges, has a diameter of 7.5 meters and weighs 5.5 tons. The work has passed several endurance tests, including falling heavy objects at high speed.

It rests on a stone and ceramic tower, dedicated to Mary, located in the apse of the temple, on the crypt in which Gaudí is buried. It is the second highest of the eighteen that the Sagrada Familia will have. The tower is hollow and has a spectacular skylight, which collects the sunlight that falls on the altar.

With its 138 meters, it marks a “skyline” design of Barcelona, ​​defined by the profile of Tibibado on which the modern tower of Glòries, of 144 meters, the two towers of the Olympic Village – the Arts hotel and the Mapfre offices are projected. -, 154, and the curves of the Montjuic mountain.

The completion of this iconic tower has been marked by the COVID pandemic. The confinement supposed the suppression of the visits to the temple with the consequent reduction of income. Consequently, those responsible for the work decided to concentrate their efforts on the completion of the tower inaugurated today.

A popular party with castellers and sardanas by the Cobla Sant Jordi-Ciutat de Barcelona inside the temple has started this morning the inauguration of the tower, an event for which commemoration events have been scheduled for the next four weeks with the participation of citizen entities.

In the afternoon, a concelebrated mass was celebrated by Cardinal Omella, which was attended, on behalf of the consistory, by the first deputy mayor, Jaume Collboni.

The Pope: the star marks the path followed in Barcelona

During the ceremony, a message from Pope Francis was projected, who began his intervention with a memory of the poor, the sick, those affected by the covid, and the elderly.

The Pope has said that the brightness of the star marks “the synodial path” that is followed in Barcelona, ​​a city that he has asked, especially those who have responsibilities, not to forget the poor and the excluded. “Do not stop praying for them,” he added, because perhaps “we are responsible” for their situation.

In his homily, Cardinal Omella said that, “without intending it, the temple of the Sagrada Familia is the emblem of Barcelona” and one of the most “beautiful and impressive on the entire planet”.

In the blessing of the tower and the star, the cardinal asked that these symbols, dedicated to the Virgin, “bless the city of Barcelona” and that, in turn, the people of Barcelona invoke “always the mother of God.”

During the ceremony, the composition, with arrangements by Marc Timón, of the piece “Magnificado”, in homage to the Virgin, performed by the Orfeó Català and an instrumental group of metal and percussion, accompanied by the organ, was also premiered.

The pending works of the temple

The architect Gaudí devised the temple of the Sagrada Familia with 18 towers, of which the highest will be the one dedicated to Jesus, already under construction, and which will measure 172.2 meters, somewhat less than the Montjuic mountain.

In addition to this, the four towers dedicated to the evangelists, which will have 135 meters, are missing. The Board of Works is working towards the inauguration of one of them next year although it does not rule out that, depending on the income, it will finally finish two. The temple already has those dedicated to the apostles, 112 meters long.

A representation of the residents of the neighborhood in which the temple stands has declined to attend today’s events. The original project of 1883 foresees that, in front of the portico de la Gloria, on Mallorca street, a monumental staircase will be built that will connect with a new avenue 50 meters wide.

In 1976, in the General Metropolitan Plan (PGM), the land was reserved, today occupied by buildings, whose neighbors still do not know if they will finally be expropriated to complete Gaudí’s original project.