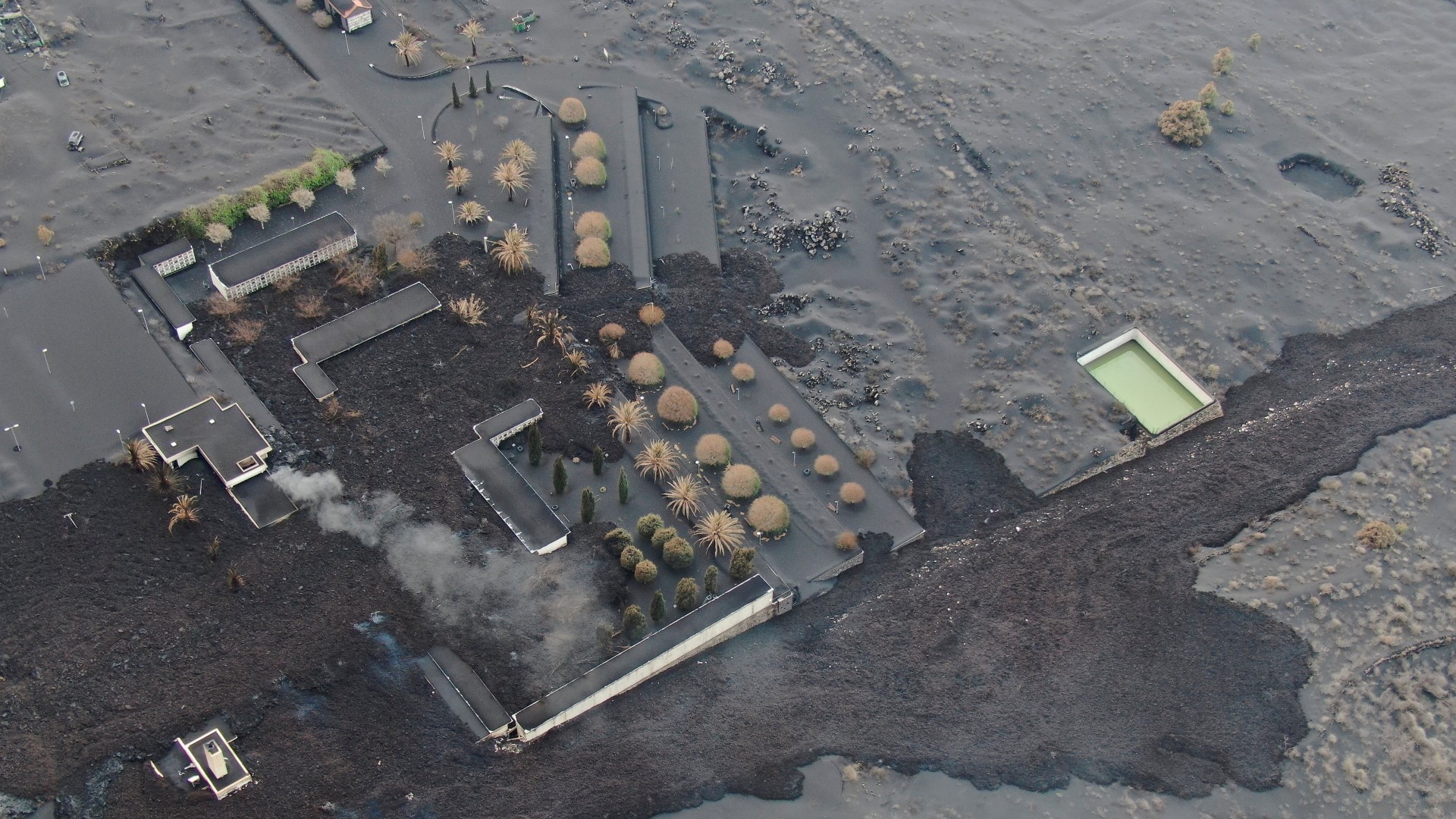 The new lava flow that devastated the Las Manchas cemetery this Thursday has slowed its advance once has reached the laundry area 11 and the material it was carrying has begun to cool. This magma spill arose from the reopening of an eruptive focus at the eastern end of the volcano, as explained by the director of the National Geographic Institute (IGN) in the Canary Islands, María José Blanco.

The director of the scientific committee of the Canary Islands Volcanic Emergency Plan (Pevolca) has also indicated that the fissure that opened shortly after just below a house less than a kilometer south of the main cone, with several lava emission points, “no longer has visible activity“and is framed” within the ongoing eruptive process. “

The other focus of current attention on La Palma is the orange alert for heavy rains that, together with the accumulation of ash, can generate the formation of hyper-concentrated flows in areas of high runoff. As indicated by the technical director of Pevolca, Miguel Ángel Morcuende, the eruption at Cumbre Vieja has diverted the channels of the waters, so it is necessary to improve rain evacuation and has warned of the serious damage that could be caused by rain and ash.

The State Meteorological Agency (Aemet) predicts that the rainfall will subside during the next morning and on Saturday it is expected to rain moderately.

These alerts have forced paralyze ash cleaning tasks in the homes evacuated from the exclusion zone, as well as the refurbishment works of the access road to Puerto Naos. Morcuende has insisted on the importance of the study being carried out to re-channel the waters and correct the channels and rainwater evacuation areas to minimize the vulnerability of various neighborhoods near the volcano.

See also  The 'charterhouse of Parma', the Milan and the crossing of the desert | sports

Around 3,160 deceased buried under lava

Morcuende has pointed out that before stopping its advance, the new wash that emanated this Thursday from the volcano ran parallel to the number ten, trampling an important part of the photovoltaic area of ​​Las Manchas, affecting several homes and crossing the cemetery of Our Lady of the Angels, who housed the remains of 3,160 deceased and the only crematorium on the island.

In addition to this new flow, the contribution of lava from previous flows continues, bifurcating into two areas: washes four, five and seven, between the mountain of Todoque (south) and the mountain of La Laguna (north) and phear laundry nine, which is being monitored for overflows that may affect new urban areas.

As for the damage to infrastructure, according to the latest data from the cadastre there are some 1,506 buildings destroyed, of which 1,212 are for residential use, 161 for agricultural use, 67 for industrial use, 36 for hostels, 13 for public use and 16 for other uses. Regarding the information provided by the Copernicus satellite, it is estimated that there are 2,786 buildings affected, 2,695 totally destroyed and 91 partially.

Pevolca spokesmen have indicated that deep seismicity continues at low values ​​and intermediate seismicity is also decreasing. The maximum magnitude in the last hours has been 4.8 mbLg of an event registered on Thursday at 10:40 p.m. (Canary time), at a depth of 37 kilometers. Tremor also remains low.

Regarding air quality, good or reasonably good values ​​have been registered this Friday in all the stations of the Island, both in PM10 particles and in sulfur dioxide (SO2). What’s more, gas measurements in exclusion zones have improved considerably.

The best data comes from the meteorology, since it is expected that the turn of the wind will dispose the ash cloud and SO2 towards the west from the next morning and what will mean a favorable scenario for the operation of La Palma airport, which has been inoperative for a week. The Binter airline has announced that it will keep flights suspended until 1:00 p.m. local time.

The Minister of Inclusion, Social Security and Migration, José Luis Escrivá, has guaranteed this Friday from La Palma that the Records of Temporary Employment Regulation (ERTE) specific for the island and the aid to the self-employed due to lack of activity will be maintained “as long as as necessary. ” It will act as the Government did with the specific measures related to the COVID-19 pandemic, the minister stressed.

Escrivá stressed that practically all ERTE requests have been resolved favorably and in an “agile” manner, and there is “enormous flexibility” with requests for postponement of the payment of contributions by companies not directly affected by the volcano.

Additionally, the minister is willing to analyze the proposal of the association of fishermen of Tazacorte of power make compatible the access to aid and the exemption of the Security quotas, which requires a regulatory change and has committed to transferring to the ministerial meeting next Tuesday the proposals that have been made during his visit to La Palma and that are not within his competence, although he has insisted that the measures of urgency that does correspond to your portfolio will remain “as long as it takes.”

“An opportunity may come out of the crisis“, defended Escrivá,” really impressed “by the coordination between the different institutions and public bodies that participate in the Pevolca. The minister has transferred” the solidarity “of the Government of Spain with the people of La Palma and its punishment to the destruction of the cemetery from Las Manchas through the passage of lava, which “fills us all with so much sadness.”