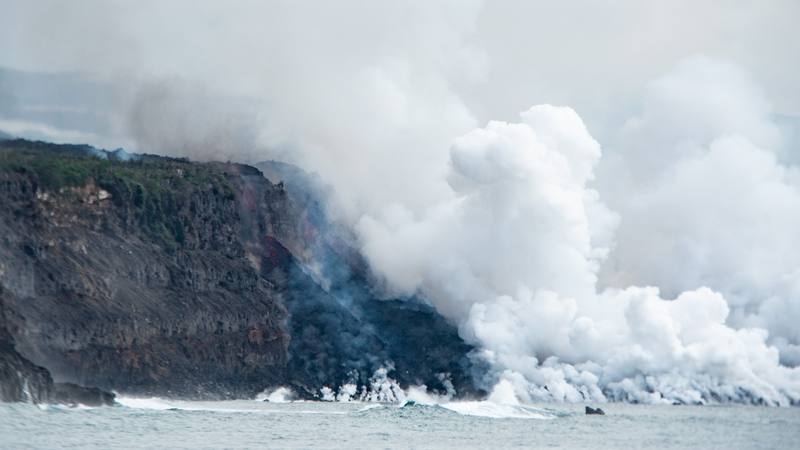 The Directorate of the Volcanic Emergency Plan of the Canary Islands (Pevolca) has finalized this Tuesday at noon the confinement order for the coastal nuclei of Tazacorte decreed on Monday as a result of the arrival of a fourth wash, the seven, to the beach. The Scientific Committee has agreed that there is no longer any risk to the population due to the emanation of gases when the lava comes into contact with the sea in a radius greater than 1 kilometer.

This measure affected 3,000 people from the neighborhoods of San Borondón, the town of Tazacorte and the scattered area of ​​Cardón up to Camino Los Palomares in the north, although the authorities continue to recommend to the population closest to the new lava delta that wear FFP2 mask outside.

The arrival of the washing into the sea caused the activity at the Tazacorte dock to be temporarily restricted, where this prohibition has already been lifted. Nevertheless, an exclusion zone is maintained only accessible to scientists and the Navy. The ban could be reactivated if air quality conditions generate the confinement of populations adjacent to the port and in case collapses of the lava delta structure are anticipated that may generate large waves or other risks derived from the volcanic phenomenon.

The Technical Director of Pevolca, Miguel Ángel Morcuende, has explained that most of the material emitted by the volcano runs above the northern area, on stream number seven that pours the lava into the sea, forming the new lava delta, which it already occupies an area of ​​13 hectares.

See also  Match dates, qualified teams, how to get tickets and can England win?

The southernmost fajana reaches 43.46 hectares, 0.5 more than the previous data, which reflects that there is still lava feeding, although very small, in the southern part of the emergency. In addition, the maximum width between castings has increased to 3,300 meters.

The airport could be closed until the weekend

At the airport of the capital of La Palma no airline operates since last Saturday due to the eastern direction of the cloud of dust and ash. This aeronautical blockade could continue until the weekend if the intensity of the eruptive column is not reduced.

The forecast of the State Meteorological Agency (Aemet) is that this Wednesday there will be favorable “small time window”, although everything indicates that later the bad conditions will return to be able to fly. Scientists expect the ash and sulfur dioxide cloud to remain disposed to the east-northeast from the eruptive focus this week.

“La Palma airport is closed, so the only way to enter the island is by ferry. #Direct @lafalconetti

As of Thursday and until Saturday, the arrival of an Atlantic trough is expected to arrive on the island, which will produce rainfall in the eastern part of La Palma of a strong character with accumulated in twelve hours that may exceed 60 millimeters. Aemet has already activated the yellow warning (risk) based on this forecast.

For her part, the spokesperson for the Scientific Committee, Carmen López, has reported that the level of seismicity has increased at depths greater than 20 kilometers, with a maximum magnitude of 4.8 mbLg reached in an event at 01:03 a.m. depth of 39 kilometers, felt with intensity IV (on the EMS intensity scale on XII). The seismicity at intermediate depths continues to be located in the same areas and the tremor remains at a low level.

See also  Disconnected: Some Masters fans 'jonesing' for their phones

Next to the volcano, the air quality is unfavorable in Los Llanos de Aridane and El Paso and doctors are detecting increasing problems in patients with previous pathologies: “They feel greater respiratory discomfort, their symptoms have increased and that has forced pulmonologists to adjust their medication, “explains a doctor who works in the emergency area.

The poor air quality caused by the volcano affects the residents of La Palma: “Their symptoms have increased”

Last night the threshold for sulfur dioxide (SO2) in suspension at the Los Llanos de Aridane station was exceeded, reaching extremely unfavorable values ​​for a few hours, which subsequently decreased. As of early morning, no new exceedances have been registered and the Air Quality Indices are good in all stations except in Los Llanos and Tazacorte, which are regular.

With regard to particles smaller than 10 microns (PM10), the daily limit value was not exceeded at any station on Monday. During the morning of this Tuesday a slight increase in concentrations has been observed in La Grama and Los Llanos de Aridane, but still remain at fair and reasonably good levels, respectively.

In this regard, the scientific committee has recalled that the risk groups of the Aridane Valley, Santa Cruz de La Palma, Breña Alta and Breña Baja should avoid activities outside and stay indoors, while for the general population it is advisable reduce strenuous outdoor activity and the use of FFP2 masks.