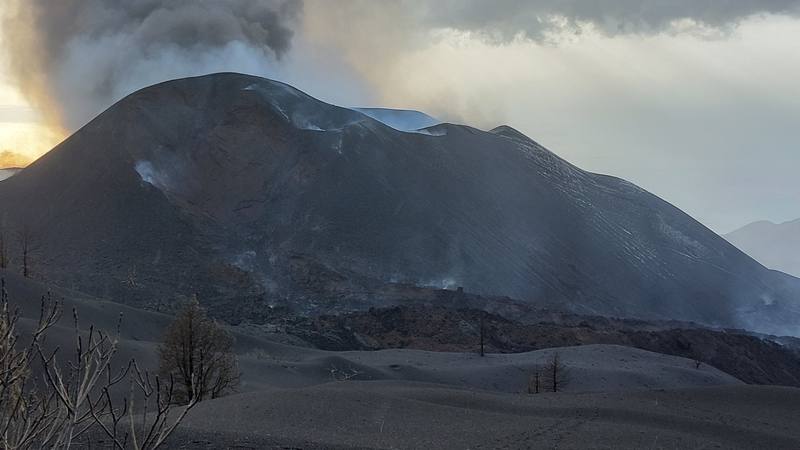 The eruption of the La Palma volcano has once again taken a new turn this Friday. During the early hours of the morning the northeast cone of Cumbre Vieja, which during this week has focused almost all the strombolian activity, has started to stop expelling lava and pyroclasts, moment in which an emission center on the southeast flank was reactivated. From this eruptive mouth a lava flow has spilled that runs in a southwesterly direction towards Las Manchas above wash ten, on ground already trodden.

“This timelapse of today (from 00:00) seen from the camera of the @IGNSpain located to the east of the eruption of #LaPalma shows the disappearance of pyroclastic emission from the secondary cone this morning and the increase in activity at the emitter point south of this pic.twitter.com/Ie34fKOmjZ“

Regarding the evolution of the rest of the wastes, the temporary spokesman for the technical committee of the Special Plan for Civil Protection and Emergency Attention for Volcanic Risk (Pevolca), Francisco Prieto, pointed out this Friday that the greatest contribution of lava continues to flow through the central area Mainly on pour seven, cooling in the low areas, but there are also advances of pourings in the upper zone to the north, where the lava flows more slowly and reaches the Tacande road, although without separating much from the main one.

A situation that has suddenly changed when around 4:30 p.m. Canarian time the volcano has stopped emitting lava and pyroclasts from any of its eruptive mouths, starting a momentary degassing phase which has culminated at 7:00 p.m. when one of the multiple emission centers has resumed explosive activity.

“The secondary cone of the Cumbre Vieja volcano is currently without any type of activity. Photo taken from the north area. #EruptionLaPalma pic.twitter.com/BHyoN5vUS0“

The area affected by lava is already estimated at 1,144 hectares, with a maximum width between flows of 3,350 meters. The data provided by the Copernicus satellite indicates that there are approximately 2,891 buildings destroyed, of which 2,790 are totally affected and 101 partially.

Intermediate and deep seismicity have decreased in the last 24 hours after having registered a great activity in recent days, with more than 1,000 earthquakes between Monday and Wednesday, especially in the intermediate depths.

The maximum magnitude has been 4.2 mbLg of an event registered this Friday at 05:14, with an intensity IV over XII at 13 kilometers deep.

As indicated by the spokeswoman for the Pevolca scientific committee, Carmen López, the level of the volcanic tremor is at medium values, although it registers high variability, and a new episode of vertical elevation of the terrain of 6 centimeters at the geodetic station closest to the eruptive center, the LP03, in the vicinity of Jedey.

López explained that this deformation is related to the feeding of the eruptive process, the movement of magma under the surface, and the station that has collected it is very sensitive due to its location near the volcano.