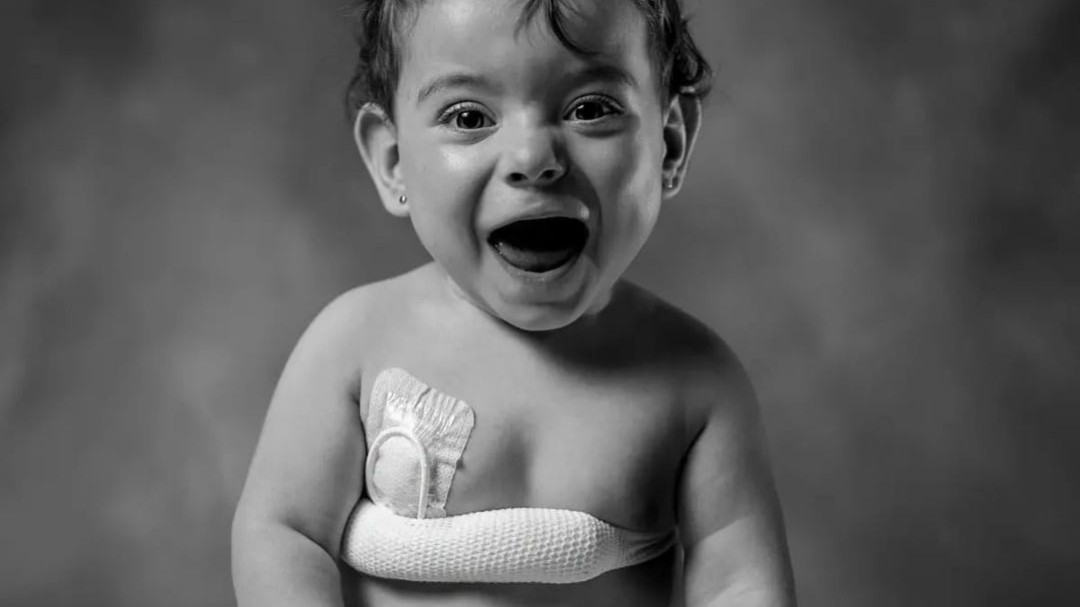 Greta was born very premature, with 24 weeks and 600 grams of weight. At birth, he had to spend the same time in the ICU that he had been in his mother’s belly, almost six months. The immaturity of his digestive system caused intestinal necrosis and after six operations, they had to remove a large part of the small intestine. Now, more than a year later, the Hospital La Fe de Valencia, where he was born, does not want to refer his case to the reference center in Spain for this type of condition, the Hospital La Paz in Madrid. In Spain, this is the only way to change from a public hospital in an autonomous community in which it is registered to a different one in another region.

“Eat baby food like any normal baby. The problem is that as his intestine is short, he does not absorb the necessary nutrients and he needs an additional supply through an intravenous route ”, as explained by Beatriz, his mother. This is what is known as intestinal failure, a rare disease that some 400 children suffer in Spain and that in Europe has a prevalence of between five and twenty cases per million inhabitants.

Since Greta was born, Beatriz and her husband have had to become their own “specialist doctors.” “Some nights we connect him to a nutrition dropper through a catheter, like cables in the chest, it is what is called parenteral nutrition.”

Through an acquaintance with a similar case, she learned of the existence of NUPA, the Spanish Association to help children, adults and families affected by intestinal failure, multivisceral transplantation and parenteral nutrition. It was there when she met more children with a situation similar to that of her daughter and they told her about the La Paz Hospital in Madrid, a reference center in Spain for intestinal failure and the only hospital in the country accredited to perform bowel transplantation. “I found out that many children had their lives completely changed because they had another treatment and other types of tests and I said: I also want them to see her there.”

It was at that moment when he asked the center that was treating Greta, the Hospital La Fe de Valencia, to transfer to the Hospital La Paz. La Fe told him that they were “fully qualified to handle the case” and that if he went to Madrid he should not return there. In Spain, as explained by Dr. Gerardo Prieto, creator and Head of the intestinal rehabilitation and transplantation unit at Hospital La Paz for 20 years, “the referring physician must consider that he has exhausted his treatment options. But it is voluntary and you may or may not do it. The important thing here is not only to refer all cases, but to refer them soon ”.

La Paz works hand in hand with NUPA. For its director, Alba Rodríguez Santos, it is an injustice: “we ask that people not have the right to different health care because of the postal code. Everyone should have the right to a second opinion ”.

Rodríguez realized that children were arriving from all over Spain except from Hospital La Fe in Valencia and contacted the center. They told him that “they did not see fit to refer patients with intestinal failure to any unit.” “The reality is that I have not yet met someone who wants to return to La Fe,” says the Director of NUPA.

According to the association, in the last 18 months, 10 patients have sought their own means to have a second opinion, around 70% with intestinal failure that La Fe has in pediatrics, says NUPA.

Beatriz, tired of the refusals from the Valencian hospital, began to look for alternatives to go to Madrid. The first option he thought about was to go to the emergency room directly from Hospital La Paz. “I would have gone if I had seen that Greta wasn’t pulling forward, but it wasn’t so bad.”

The second option, then, was to register in Madrid. But she did not even think about it because she did not have sufficient financial means, nor was she willing to lose the right to health in Valencia.

The one who did take a risk with all that was Ana in 2018. Her daughter Aitana was also born with intestinal failure in Valencia. La Fe denied him the referral and decided to register in Madrid thanks to the fact that a relative lived there. About 400 euros a month was spent just on therapies, plus transportation costs or medicines. After more than a year and a half fighting, in mid-2019 he got the referral.

A liver problem and a biopsy prompted La Fe to have to send Aitana’s case to Madrid. Aitana needed a bowel transplant and La Paz was the only Hospital that could do it for her. “They still told me in Valencia that they didn’t think I needed a transplant,” explains Ana excitedly.

In the different rooms that NUPA has, it is observed that one has just been occupied. Beatriz comes out of it with a bottle. After weeks of waiting for La Paz to have a free bed for Greta to get a full checkup, the time has finally come. What she calls “agreed emergencies.”

“At the moment it is all good news, if the rest of the tests go well, we will be able to take away parenteral nutrition from Greta and she will be able to eat normally.” Two days later, another woman comes out of that room. It’s not Beatriz, it’s Ana. Greta has already returned home with “very good news.” Now it is Aitana’s turn. The girl, sitting on a chair, watches cartoons and repeats “mom and dad” smiling, while she waits impatiently to be transplanted.