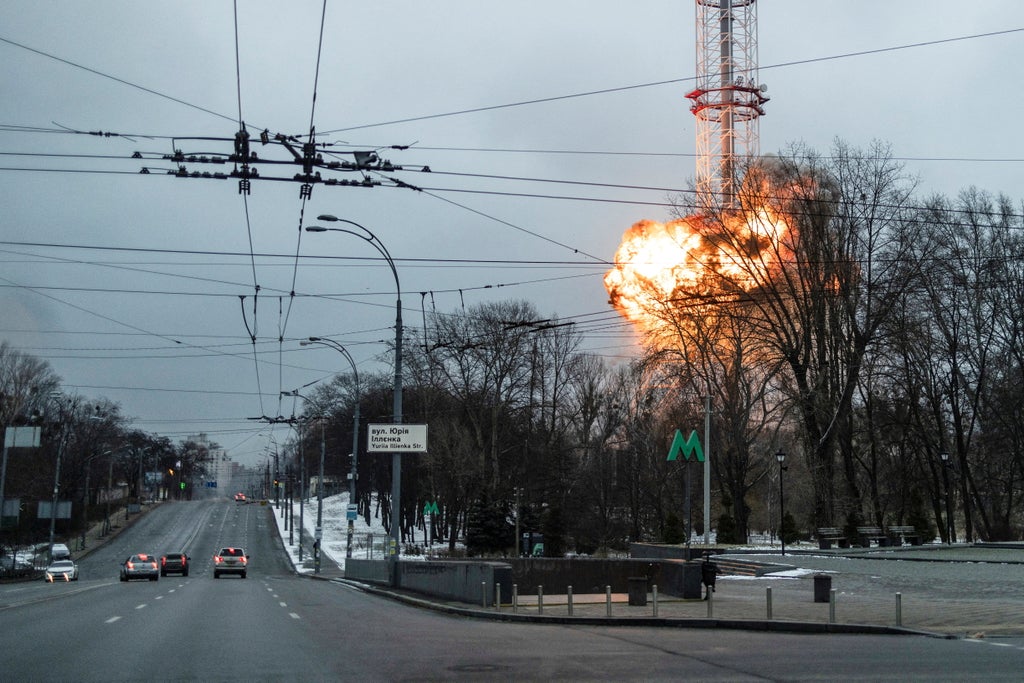 Russia warned residents to flee their homes as it threatened “high-precision” strikes on Kyiv on Tuesday, amid warnings that an increasingly belligerent Vladimir Putin could be preparing to reduce the Ukrainian capital to rubble.

Moscow said it would target security and communications sites in the city, moments before a missile attack on a television tower killed five people.

As a 40-mile-long convoy of hundreds of Russian tanks and other vehicles slowly advanced on the city, Russia’s defense ministry told Kyiv’s residents living close to intended targets to abandon their homes, without giving any information.

The direct threat raised fears the war is about to enter a far more deadly phase.

Boris Johnson said Mr Putin could be tempted to “Grozny-fy” Kyiv – a reference to the capital of Chechnya that was so badly attacked by Russian forces two decades ago that the UN called it the most destroyed city on earth.

Asked what he believed Mr Putin’s plans were, the prime minister said: “I think that he’s gone into a cul de sac and it’s very difficult for him to back out, and that’s the problem we’ve got.

“And if you’re sitting where he is, his only instinct is going to be to double down and to try and ‘Grozny-fy’ Kyiv, if you know what I mean. And to reduce it to [rubble]and I think that that would be an unalterable moral humanitarian catastrophe and I hope he doesn’t do that.”

Moscow’s strategy in Chechnya and Syria was to use artillery and air bombardments to pulverise cities and crush fighters’ resolve. Britain’s Ministry of Defense said it had been seen an increase in Russian air and artillery strikes on populated urban areas over the past two days. The ministry also said three cities – Kharkiv, Kherson and Mariupol – were encircled by Russian forces.

Amid growing concern at the course of the conflict, Russia was accused of committing war crimes after an assault on Freedom Square in the second city of Kharkiv.

Mr Zelensky also said the attack on the Kyiv TV mast had also hit the nearby Babyn Yar Holocaust memorial. Babyn Yar was the site of an atrocity during the Second World War when the Nazis massacred more than 33,000 Jews over the course of two days. Russia had claimed its invasion of Ukraine was to “de-Nazify” the country.

Russian forces also pressed their attack on other towns and cities across the country, including the strategic ports of Odesa and Mariupol in the south.

The war has also given rise to one of Europe’s worst humanitarian crises of modern times. At least 660,000 refugees have fled Ukraine, said the UN, as it forecast “Europe’s largest refugee crisis this century”.

The majority are crossing into Poland, followed by Hungary, Moldova, Romania and Slovakia. Among those who got out on Tuesday was Vera Rudova, 31, a stylist from Kyiv, who arrived in Budapest.

“It was my last chance to get out,” she told The Independent. “My goal was just not to die and be safe.”

“Hundreds of thousands of families are without drinking water,” he said.

The political and economic isolation of Russia continued on Tuesday. Oil prices surged again and Britain also slapped sanctions on Belarus in response to the eastern European country’s support for the Russian invasion of Ukraine, foreign secretary Liz Truss announced. Overall death tolls from the fighting remained unclear, but a senior western intelligence official estimated Tuesday that more than 5,000 Russian soldiers had been captured or killed.

Unbowed by western condemnation, Russian officials increased their threats of escalation, days after raising the specter of nuclear war. A top Kremlin official warned that the west’s “economic war” against Russia could turn into a “real one”.