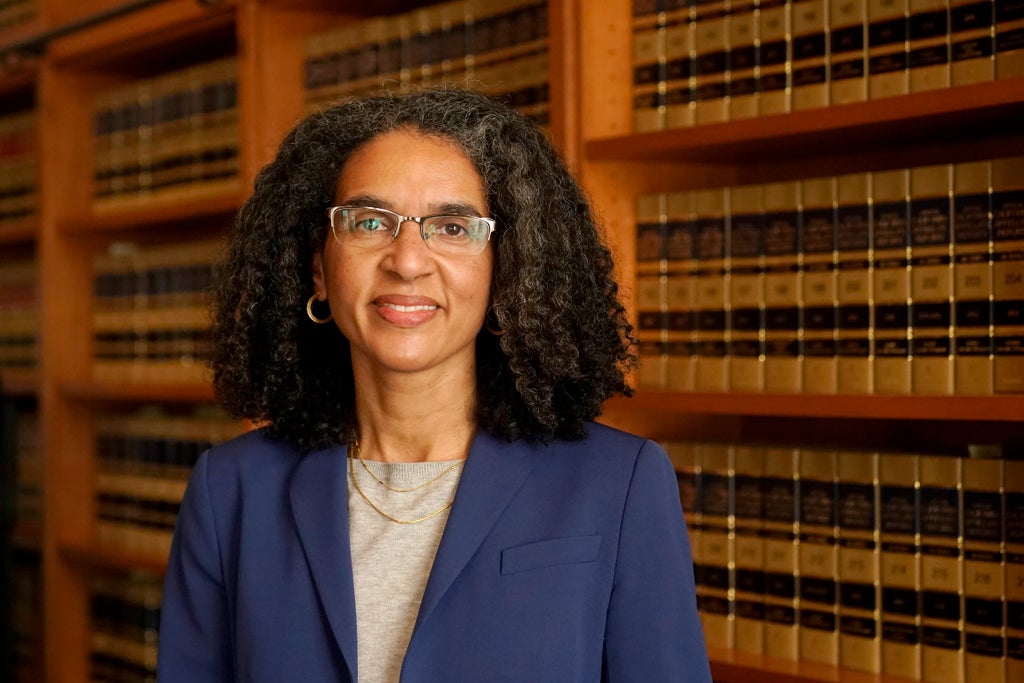 When Leondra Kruger settled into her new chambers at California’s highest court seven years ago, she asked her top assistant to place the reports from the US Supreme Court on the shelf behind her desk.

It was an unusual request for a state court that does not frequently deal with matters of federal law, but Kruger wanted the justices’ latest rulings nearby, said attorney Greg Wolff, the former head of her chambers.

“She just wanted them within reach,” Wolff said. “I think the US Supreme Court is her first love of her.”

Kruger, an associate justice on the California Supreme Court, may herself be within reach of a seat on the nation’s highest court. She is one of several Black women — judges and lawyers — whose names are being circulated as possible picks by President Joe Biden to replace retiring Justice Stephen Breyer.

Kruger, 45, is admired by colleagues and observers for her sharp intellect, modesty and skill forging consensus.

“She has the ability to persuade judges who are coming from a very different place than she is,” said retired California Court of Appeal Justice J. Anthony Kline. “People listen to her. Ella she’s not bombastic. She she’s not confrontational. Ella she’s not highly ideological. But she’s very analytical. She’s very committed to the law.”

Kruger was a law clerk to the late US Supreme Court Justice John Paul Stevens in 2003-04, worked at two law firms, taught law for a year and then worked several years at the US Justice Department before becoming a judge.

“I just don’t know how you match those skills. She, to me, is remarkable,” said California Chief Justice Tani Cantil-Sakauye.

Kruger grew up in South Pasadena, a leafy upper-middle-class suburb close to downtown Los Angeles, a daughter of two pediatricians. Ella’s mother is Jamaican and her late father was Jewish. She graduated with honors from Harvard, where she wrote for The Harvard Crimson, the school’s newspaper. She got her law degree from Yale where she was editor-in-chief at the Yale Law Journal.

In the office of the US solicitor general, the government’s top Supreme Court lawyer, Kruger argued a dozen cases during the Bush and Obama administrations.

At 38 she was picked by then-Gov. Jerry Brown to serve on California’s high court. At the time, the only criticism of her appointment by her was that she had not been a judge or spent much time as a lawyer in California, though no one spoke in opposition at a public hearing.

Kruger, who had a young son, was the youngest justice to serve on the court and only the second Black woman. Shortly after her daughter was born, Kruger was back at work. Cantil-Sakauye said she was startled — and delighted — when she stepped onto an elevator in the court’s Los Angeles location to see Kruger with her baby de ella in a stroller.

“She didn’t miss a beat,” Cantil-Sakauye said. “I don’t recall her taking any time off.”

Kruger is seen as a moderate on the seven-member court.

In 2019, Kruger wrote a 4-3 opinion, signed onto by the other Democrat-appointed judges, that found if a driver is pulled over and does not produce a license, police cannot search the vehicle for personal identification without a warrant.

In a case that challenged the constitutionality of a voter-approved law that required taking DNA samples from suspects arrested for felonies, Kruger authored a 4-3 opinion backed by the three justices appointed by then-Republican Gov. Arnold Schwarzenegger.

Her ruling was limited in scope, finding that a suspect — later convicted of Arson — had been properly convicted of a misdemeanor for refusing to provide his DNA sample at his arrest.

She bypassed the constitutional question, which she said was better left for a case with different circumstances.

Kline, whose ruling she overturned in that case, said that opinion is often viewed two different ways.

“Some people on the left see her as insufficiently progressive,” he said. “But there were other people who pointed to her opinion of her in (the case) as showing that she is a moderate. She’s an incrementalist.”

Leslie Jacobs, a professor at McGeorge School of Law, said Kruger’s rulings may seem politically unpredictable in the sense that she is not always siding with Democrats, but she consistently maintains her independence.

“The ideal is that they’re supposed to remove themselves from politics and do the job of interpreting,” Jacobs said.

That could appeal to Republican senators Biden hopes to win over. US Senate Minority Leader Mitch McConnell, R-Ky., has warned about appointing someone from the “radical” left.

“The things I’m describing are the opposite of radical,” Jacobs said. “They are careful and limited in scope, you know, in a number of different types of decisions.”

David Ettinger, an appellate lawyer with four decades of experience who blogs about the California Supreme Court, described Kruger as conservative with her use of judicial power while aiming for stability and consistency.

During arguments, “she’s asking questions to get the answers, not to showboat, not to make political statements,” Ettinger said.

See also  It's Decision Day at The Fed, Here's How it All Works

In speaking at San Francisco Bar Association panel in 2000 on Stevens’ legacy, Kruger she said she often reflected on the simple advice he gave a group of former clerks who gathered the year before for his 99th and final birthday: “Always work hard and do your best.”

“For 35 years he worked as hard as he could in the service of the public to render impartial and fair justice and he always did his best,” she said. “It can only be the rest of our hope that we are as successful as he was in that endeavor.”

Kline said the one thing he’s not sure of is how interested Kruger is in following in Stevens’ footsteps. She has a big family in California, her husband de ella works at a San Francisco law firm, and they have two young kids and a house they love.

Kruger told him that she was twice offered the job of solicitor general and turned it down, though he wasn’t clear when those offers were made.

Kruger and family members declined interview requests through a spokesperson.

Wolff, who worked with her for four years, thinks the nation’s highest court is Kruger’s dream job. But Kline said some people wonder if that’s the case.

Attorneys push aggressively for judicial positions and that’s not her style, he said.

“What I do know is that she’s not lobbying very heavily for the job,” Kline said.