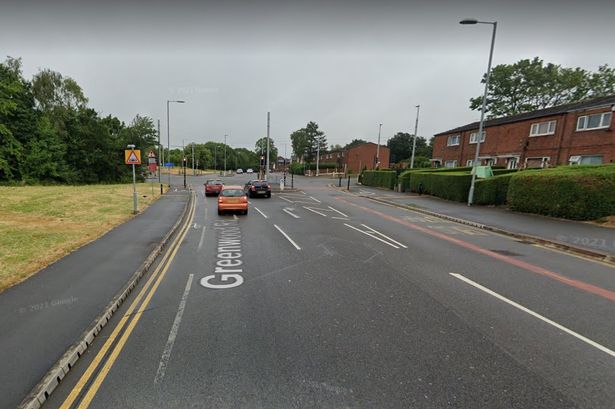 A knifeman slashed his partner’s son to the face when he kicked down the door after turning up to visit his mum. David Bradley, 57, left the man with potentially life-threatening injuries after grabbing a kitchen knife and stabbing him to the face.

He collapsed in the ambulance and was given blood as he was rushed to hospital. Bradley said the man had ‘shot his boy’, referring to a friend of his.

Manchester Crown Court heard that the victim had previously been convicted of attempted murder in 2002 and sentenced to 15 years in prison. After turning up at the flat in Wythenshawe in February last year, he had accused Bradley of stealing a letter from him.

Prosecutors told how he had turned up at his mother’s flat on Greenwood Road because he hadn’t seen her ‘for ages’. She lived there with Bradley, her partner of 30 years.

An argument developed as the son accused Bradley of stealing the letter. Bradley told him to ‘get out of my f****** flat’ and escorted him out.

But he remained outside the flat, started shouting through the letter box and then kicked the door down. Bradley approached and lifted up his right hand from him, slashing him to the face with a kitchen knife.

He then left and realized he was bleeding heavily. An ambulance was called and on his way to the hospital, he collapsed in the ambulance. Paramedics had to give him CPR, with the wound having punctured a facial artery.

He was discharged six days after the attack, which happened on February 18 last year. Prosecutor Andrew Macintosh said of the victim: “He says he is scared people will think he is a criminal for reason of the scar on his face of him.” I feel lucky to be alive, “he said.

Bradley was arrested at a hotel in Manchester, and told officers that the victim had ‘shot his boy’. I have admitted an offense of wounding, while acting in excessive self-defence.

Bradley, who has 55 previous convictions, was deemed to be ‘very unwell’ at the time and suffering from mental health issues. He has been diagnosed with schizoaffective disorder and has been kept at the medium secure Edenfield Unit at Prestwich hospital.

Sentencing, Judge Patrick Field QC told Bradley, of Prestwich hospital,: “On February 18 last year you had an argument with your partner’s son, and argument that took place at your partner’s flat. It is quite clear your partner’s son, the victim in this case, left the property and then sought to regain admission, shouting through the letterbox.

“He ended up kicking down the door and entering the flat again. It perhaps can be inferred that he was not welcome. When he came into the flat he encountered you again, you stabbed him with a kitchen knife in the face.

“That resulted in potentially life threatening injuries, and a permanent scar.” Bradley was sentenced to a hospital order with restrictions, meaning he will remain at the Edenfield Unit indefinitely to undergo further mental health treatment.

Get the latest court stories by signing up to our courts newsletter here.