The announcement in South Africa of the detection of a new variant of the coronavirus, identified as B.1.1.529 and which has multiple mutations, has triggered a wave of international concern on Friday despite the relatively low number of cases identified to date, which advises to be clear about your keys.

While experts from the World Health Organization (WHO) meet this Friday to analyze the implications of this new variant, these are the main characteristics, determined so far, of B.1.1.529, according to South African scientists, that this Thursday was the first country to give the alert about its detection.

The new variant presents “a very unusual constellation of mutations,” as confirmed by Professor Tulio de Oliveira, from the KwaZulu-Natal Research and Sequencing Innovation Platform (KRISP, a scientific institution in eastern South Africa, when confirming the discovery). leader in genomic research in the region).

In total, there are more than thirty mutations, among which there are some common to those already seen before in variants such as beta or delta, but also some new ones whose impact is still unknown.

Although the confirmed cases of this variant are still few (around a hundred), in South Africa, the country with the highest incidence to date, no differences have been identified for the moment in terms of the effects of the disease compared to other variants.

“Currently no unusual symptoms derived from infection with variant B.1.1.529 have been reported and, as with other variants, some individuals are asymptomatic,” the South African National Institute of Infectious Diseases (NICD, for its acronym) said today. in English) in a frequently asked questions release.

For now, since research is at a very early stage, it is unknown what impact this new variant could have on the transmissibility of the virus and its possible resistance to vaccines.

Scientists from South Africa point out that the new variant may be behind the rapid increase in cases detected in recent days in the country – especially in the populous province of Gauteng (where Johannesburg and Pretoria are located) – and the data points to which is dominating over the delta.

South Africa was the first country to publicly raise the alarm on Thursday, with 22 cases identified (a figure later updated to 77). The first confirmation in this country had occurred on November 23 according to samples collected in the middle of the month.

The new variant had also been identified in Botswana (4 cases) around the same time and was also detected in a traveler in Hong Kong, China who had been to South Africa.

This Friday, Israel also announced the detection of the new variant in an infected person who had been in Malawi, like Belgium. 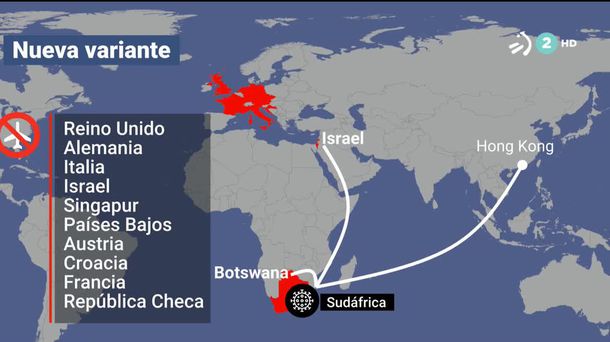 See also  Ángel Altolaguirre: The unexpected fate of Spanish Iggy Pop: “It wasn't my time to die, I survived and I'm here to tell the tale” | Culture