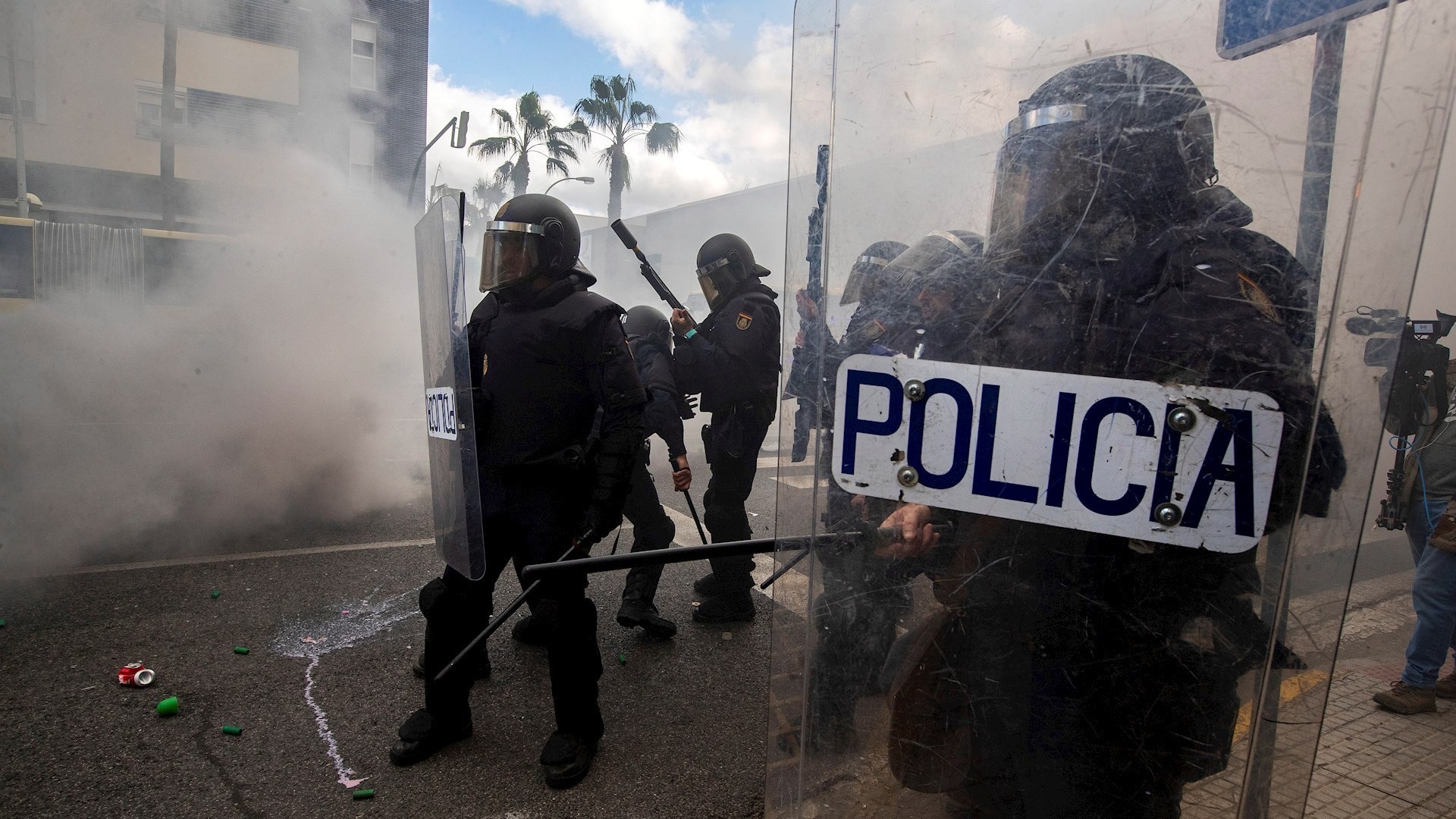 This Saturday the majority associations of the Police, the Civil Guard and other police forces take to the streets in Madrid to show their rejection against the reform of the Citizen Security Law, better known as the ‘gag law’. They expect it to be the “largest police demonstration in the history of Spain” before a modification that they consider will increase “insecurity” not only for the agents but for the entire population.

The repeal of the ‘gag law’ has been, since it was approved by the Government of Mariano Rajoy in 2015, one of the workhorses of the left and of human rights organizations, which you see in this text “repressive overtones” by “facilitating police abuses”, as Carlos Escaño, spokesperson for Amnesty International, explains to RTVE.

Pedro Sánchez promised to end the ‘gag law’ immediately after it was implemented, and this commitment appeared in the 2019 coalition agreement with United We Can. Finally, it was this November when the process has accelerated: the two government partners will present 51 amendments to a PNV proposal to eliminate some of the most controversial aspects of the law, Therefore, the unauthorized dissemination of images of the agents or the holding of “spontaneous” demonstrations without prior notice will no longer be considered serious offenses.

For the security forces, the modification of the law “will harm the principle of authority” enjoyed by the agents and also “it will reduce the operational capacity in the interventions in the street”, explains to RTVE.es Pablo Pérez, spokesman for JUPOL, the majority union of the Police and, within its matrix JUSAPOL that also includes the Civil Guard, the main organizer of the demonstration. We review the keys to the main police demands and the most controversial points of the law.

The recording of police actions, in the spotlight

One of the main criticisms of the agents is that it is going to stop considering a serious offense, with a penalty of between 601 and 30,000 euros the dissemination of images of the policemen.

Now, the amendment presented by PSOE and UP makes explicit that “The mere taking of images will not constitute an infringement in places of public transit and demonstrations, or its mere dissemination “, although it maintains the consideration of a serious offense when the use of the images” generates a certain danger “for the agents.

See also  Job seekers must find work faster or face a universal credit cutoff: We asked some jobseekers what it could mean

According to Pérez, this change in the law gives rise to a “irreparable damage to physical integrity” of the police, even if later the use of the images may be sanctioned. He cites, for example, the case of a colleague of his who had to leave a rented apartment when it became public that he was a national police officer.

Amnesty, on the other hand, welcomes the elimination of this section, since, together with the sanction for disobedience and lack of respect for authority, it constitutes a “authentic catch-all” that has resulted in 70% of the 200,000 sanctions imposed between 2015 and 2019. As Escaño exemplifies, if a protester recorded a policeman in a demonstration and the policeman did not allow him to do so, in the face of the protester’s protest, the agent could fine him for “disobeying the authority.”

A recent ruling by the Constitutional Court considered unconstitutional the use of the expression “unauthorized” in reference to the prohibition of images, something that also disappears in the new text.

The controversial principle of truthfulness

The controversial presumption of veracity of the police officers is also modified. With the ‘gag law’, the agent’s version was sufficient to incriminate a defendant. In the new text, it reads that “The act that is drawn up will enjoy the presumption of veracity of the facts recorded in it”, as up to now, but “as long as it is coherent, logical and reasonable” is added.

This matter jumped into the public sphere as a result of the case of the former member of the United We Can, Alberto Rodríguez. He was sentenced by the Supreme Court to a month and a half in prison and disqualification for having kicked an agent during a demonstration. The agent’s own statement was the only evidence for the conviction, according to the particular votes of two magistrates and Rodríguez himself, although the court considered that it was sufficient to prove the facts.

See also  Caitlyn Jenner, Piers Morgan and the male privilege of the 'canceled'

Pérez, for his part, claims that the principle of truthfulness be kept intact, since “respect for law enforcement officials is being lost and what this law provides is more shelter for the offender against the agent.”

Will the rubber balls disappear?

The new amendments establish an important modification regarding the use of rubber balls and other riot control equipment, a use widely criticized after several protesters have suffered serious injuries such as the loss of an eye in recent years.

“The competent authorities should develop specific protocols, in accordance with international standards, on the use of force and the use of anti-riot equipment, “the amendment reads, and also calls for the use of” always the least harmful means for people and avoiding those that cause irreparable injuries. “

This new text opens the door for the rubber balls to disappear, which for JUPOL will mean that the agents will see each other “doomed to a hand-to-hand confrontation between protester and police, which is going to cause more injuries in both parts “.

Demonstrations will be allowed without prior notice

According to the right of assembly contained in article 21 of the Constitution, to call a demonstration you do not have to ask for permission, but you do have to communicate it to the competent authority. If the proposed amendments go ahead, however, it will be allowed to demonstrate peacefully without prior notice in the event that it is necessary to show a “quick expression before an event of undoubted social repercussion that does not admit delay”.

These “spontaneous” demonstrations, such as those that took place after the Manada’s sentence, can be sanctioned under the current law, and according to the Police, it should continue to be the case. “If a protest is not communicated, it will mean that there is no police device prepared in case it becomes violent.. If we are seeing that with police devices already prepared we are having altercations and public disorders, if these altercations are not communicated, they can multiply, “says the spokesman for the police union.

For Escaño, the wording of the current law violates “the right to peaceful assembly, which as well as freedom of expression are basic to any rule of law and must be highly protected.” Report that “That does not happen in Spain and that is why it has been pointed out numerous times by the UN and the Council of Europe.”

This body summoned Spain in March to review the content of the law for its “repressive potential”. He considered that it gave the Police “broad powers but they do not indicate in what situations these powers can be used, or what kind of measures can be taken.”

This Saturday, more than 40 professional associations and police entities, both the National Police, the Civil Guard, regional and municipal police, will attend the demonstration. The presence of an Ertzaintza union is confirmed but not of any of the Mossos d’Esquadra.

On the part of politics, they will come representatives of PP, Vox and Ciudadanos, as happened last Wednesday in rallies before government delegations from all over Spain. At that time the leaders of the PP were present, Pablo Casado, and Vox, Santiago Abascal, as well as representatives of the orange formation, such as Edmundo Bal or Begoña Villacís.

On this occasion, the presence of the Citizens’ leader, Inés Arrimadas, and also Abascal, is confirmed. On the part of the PP, its leader Pablo Casado is expected to attend, although he has not confirmed it for sure because he previously has a convention in León. Yes, the president of the Community of Madrid, Isabel Díaz Ayuso, and the mayor of the city, José Luis Martínez-Almeida, will go, who has denied that the party leader does not go to the demonstration so as not to coincide with Ayuso, in full conflict by the power of the Madrid PP.

Pérez appreciates the presence of political representatives, but insists that they do not want to “politicize this claim”, since their demands “do not go against a color or a match.” He is convinced that it could be a “historic” demonstration, surpassing the mobilization for salary equalization from which JUSAPOL was born, and that “tens of thousands of people” can walk the streets of Madrid.