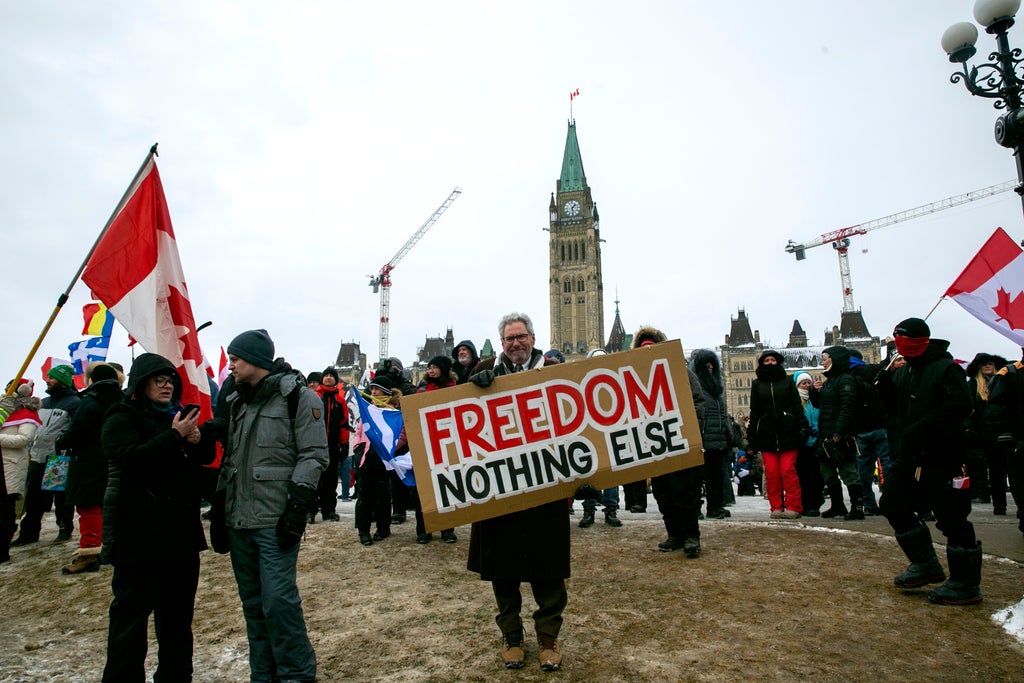 The busiest US-Canada border crossing was open Monday after protesters demonstrating against COVID-19 measures blocked it for nearly a week, but a larger protest in the capital, Ottawa persisted as city residents sought over authorities’ inability to reclaim the streets.

Demonstrations against COVID-19 restrictions and other issues have blocked several crossings along the US-Canada border and hurt the economies of both nations. They also inspired similar convoys in France, New Zealand and the Netherlands. The US Department of Homeland Security warned that truck convoys may be in the works in the United States.

After protesters began blocking bridge access Feb. 7, automakers began shutting down or reducing production — at a time when the industry is already struggling with pandemic-induced shortages of computer chips and other supply-chain disruptions. The crossing sees 25% of all trade between the two countries.

“Today, our national economic crisis at the Ambassador Bridge came to an end,” said Windsor Mayor Drew Dilkens. “Border crossings will reopen when it is safe to do so and I defer to police and border agencies to make that determination.”

About 470 miles (750 kilometers) northeast of Windsor, the protest in Ottawa has paralyzed downtown, infuriated residents who are fed up with police inaction and turned up pressure on Prime Minister Justin Trudeau

A senior government official said Trudeau will meet virtually with the leaders of Canada’s provinces on Monday morning. The official spoke on condition of anonymity as they were not authorized to speak publicly.

The city had appeared to have reached a deal in which protesters, who have jammed downtown streets for more than two weeks, would move out of residential areas, but those prospects soon faded.

Mayor Jim Watson said Sunday that he agreed to meet with demonstrators if they confined their protest to an area around Parliament Hill and moved their trucks and other vehicles out of residential neighborhoods by noon Monday. He shared a letter from one of the protest’s organizers, Tamara Lich, in which she said demonstrators “agree with your request” to focus activities at Parliament Hill.

But Lich later denied there was an agreement, saying in a tweet: “No deal has been made. End the mandates, end the passports. That is why we are here.”

In a letter Watson wrote to protesters, he said residents are “exhausted″ and “on edge” due to the demonstrations, and he warned that some businesses are teetering on the brink of permanent closure because of the disruptions.

In Surrey, British Columbia, police arrested four demonstrators Sunday, and officers in Alberta said they intercepted and disabled three excavators that were being brought to a border blockade in the town of Coutts.

While the protesters are decrying vaccine mandates for truckers and other COVID-19 restrictions, many of Canada’s public health measures, such as mask rules and vaccine passports for getting into restaurants and theaters, are already falling away as the omicron surge levels off.

Pandemic restrictions have been far stricter in Canada than in the US, but Canadians have largely supported them. The vast majority of Canadians are vaccinated, and the COVID-19 death rate is one-third that of the United States.

A judge on Friday ordered an end to the blockade at the Ambassador Bridge, and Ontario Premier Doug Ford declared a state of emergency allowing for ends of 100,000 Canadian dollars and up to one year in jail for anyone illegally blocking roads, bridges and other critical infrastructure .

US President Joe Biden’s administration on Sunday acknowledged the resolution to the bridge demonstration, which it said had “widespread damaging impacts” on the “lives and livelihoods of people” on both sides of the border.

The Windsor protest began to dwindle Saturday after police persuaded many protesters to remove vehicles blocking the road to the bridge. But in Ottawa, Saturday’s crowd swelled to what police said were 4,000 demonstrators, and a counter-protest of frustrated Ottawa residents attempting to block the convoy of trucks from entering downtown emerged Sunday.

Clayton Goodwin, a 45-year-old military veteran who was among the counterprotesters, said it was time for residents to stand up against the protesters.

“I’m horrified that other veterans would be down there co-opting my flag, co-opting my service,” said Goodwin, who is the CEO of the Veterans Accountability Commission, a nonprofit advocacy group. “It’s a grift. The city was free. We’re 92% vaccinated. We’re ready to support our businesses.”

Colleen Sinclair, another counterprotester, said the demonstrators have had their say and need to move on — with the police force, if necessary.

“They’re occupiers,” she said. “This is domestic terrorism and we want you out of our city. Go home.”

Trudeau has so far rejected calls to use the military, but has said “all options are on the table” to end the protests. Trudeau has called the protesters a “fringe” of Canadian society. Both federal and provincial politicians have said they can’t order police what to do.

Major-General Steve Boivin, commander of Canadian Special Operations Forces Command, said Sunday that two of his special forces soldiers were supporting the protests in Ottawa and were in the “process of being released” from service. Boivin said the activity goes against the military’s values ​​and ethics.