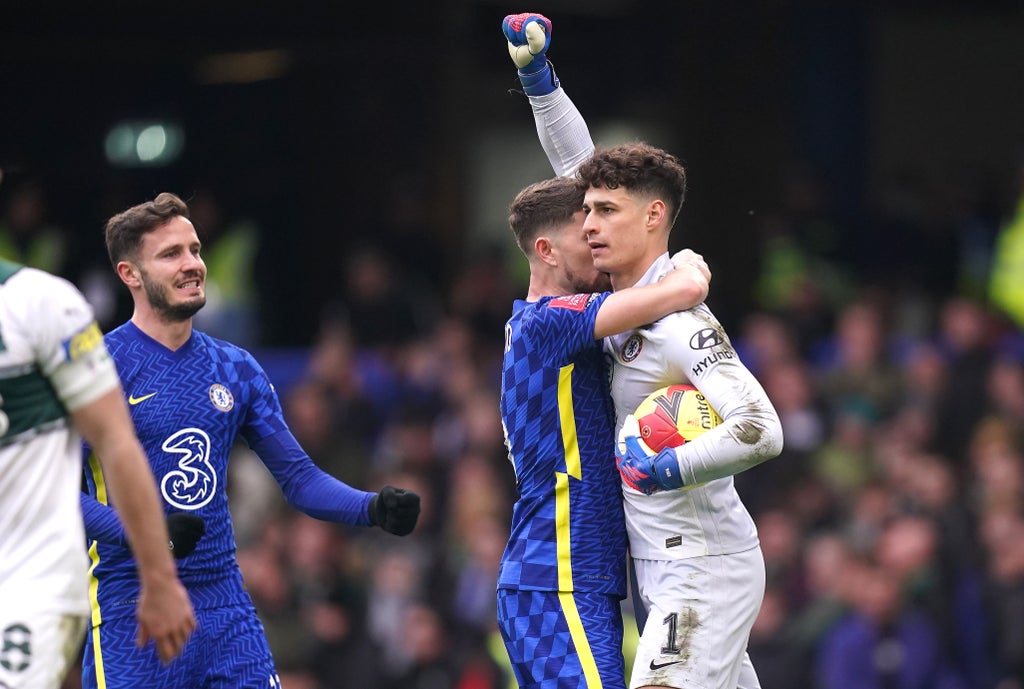 Kepa has hit several low points in his west London tenure, from refusing to be substituted in the 2019 League Cup final to losing his starting berth to Edouard Mendy.

But the 27-year-old has refused to go to seed, instead rebuilding his confidence and form to become an increasingly reliable option for the Blues.

“It’s not only about the penalty save but it’s also about the performance, it was a very good performance,” said Michels. “In the last matches, I’ve felt him very reliable in his game.

“His strength is to save penalties, he’s shown it a few times now: in the Carabao Cup twice, against Villarreal, and even in training, it’s hard to beat him.

“In penalty shoot-outs, he has the ability to read the mind of what the player is going to do. We are very happy with Kepa and he deserves this trust because he is a fantastic guy.

“To work with him for one year, it is hard for him because Edou (Mendy) is playing very good, but Kepa is constantly doing very good work in training, reliable work.

“He is friendly and an amazing guy. So I am very happy for him he could save us from a penalty shoot-out.”

Macaulay Gillesphey’s header handed Plymouth a shock early lead at Stamford Bridge on Saturday, with the Blues striking the woodwork three times in chasing a riposte.

Captain Cesar Azpilicueta backheeled home the equalizer with a well-worked effort, but the Blues could not kill the tie in regulation time.

Alonso thought he had settled the argument by sweeping into the net, only for that late penalty drama where Kepa ensured the Blues could avoid a shoot-out.

Chelsea jetted out to Abu Dhabi on Saturday night for their Club World Cup campaign, which gets underway on Wednesday.

Boss Thomas Tuchel was missing however, after testing positive for Covid-19 and starting self-isolation.

First team coaches Michels and Zsolt Low will take charge in Tuchel’s absence, with the German boss still hoping to be able to head to Abu Dhabi later in the coming week.

Chelsea’s extra-time exploits could leave the Blues heavy-legged on arrival in the United Arab Emirates, but Michels hopes otherwise.

“Hopefully the extra-time will not have too much effect,” said Michels. “We had to accept that after our break it was tough to play against an opponent who was very well organised.

“To play 120 minutes was not the target, I have to say, but we will see. It isn’t easy to come into a game like this after a break.”

Plymouth boss Steven Schumacher hopes the Pilgrims can harness their Stamford Bridge experience to boost their League One campaign.

“There’s plenty of things we can learn from this experience,” said Schumacher. “But also we must take a lot of pride and encouragement.

“Chelsea players like Mason Mount were very gracious and gave us praise for how organized we were.

“That’s a big boost to the players and hopefully can give us a positive lift going back into the league schedule.”