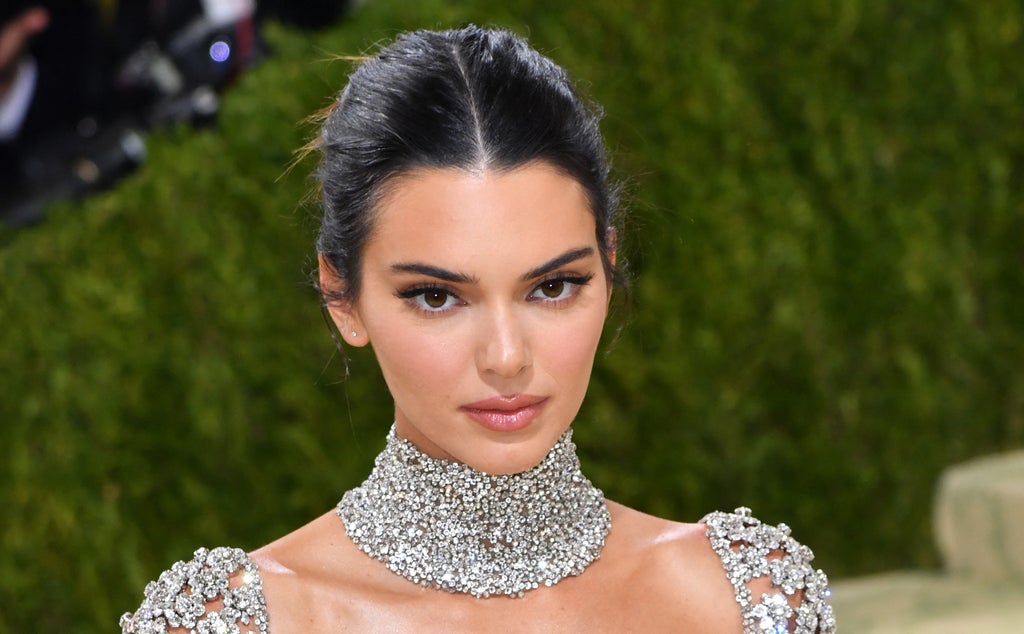 Kendall Jenner has been accused of promoting “irresponsible drinking” with a recent Instagram photo in which she can be seen drinking directly from a bottle of her 818 Tequila through a straw.

On Wednesday, the Keeping Up With The Kardashians star uploaded an Instagram album of miscellaneous photos with the caption: “Things I love:”

In addition to photos of her dog, two different cars, a horse, and an IV drip of what appears to be blood, the model also included a photo of herself drinking her newly launched tequila brand.

In the photo, which appears to have been taken at her friend Lauren Perez’s wedding, as BuzzFeed notes that Jenner is wearing the controversial cut-out dress, she can be seen leaning back in a chair as she sips through a straw from a full bottle of her tequila.

While most of the comments on Instagram were focused on the IV drip photo, the photo of Jenner drinking the alcohol with a straw later circulated on Reddit, where one person claimed the unofficial promotion shot was “irresponsible”.

“It may be an unpopular opinion but I think this type of promo is actually quite irresponsible,” they wrote.

In a follow-up comment, they elaborated on their opinion, explaining that, “as an alcohol brand owner,” they don’t believe that Jenner should “promote excess consumption.”

“My initial point was more related to the fact that it’s her brand that she’s promoting, as an alcohol brand owner I feel that she shouldn’t really promote excess consumption,” they wrote. “She’s not drinking from a shot glass, but a straw and entire bottle seems excessive. Social media is a huge gray area but there’s strict rules about alcohol advertising in print and TV.”

The photo prompted others to agree, with someone else claiming that the model’s depiction of drinking was “not a responsible way to drink,” as it “promotes binge drinking”.

“It’s irresponsible drinking to be drinking straight out of the bottle like that,” another person wrote. “It’s rather irresponsible advertising to encourage people to consume alcohol like that.

“You don’t really know how much you’re drinking and it’s pretty easy to argue consuming alcohol like this leads to overconsumption.”

According to another critic, the photo inadvertently promotes the “exact opposite” of drinking responsibly, and may go as far as being “dangerous.”

“I get that she wants to try to promote it in a cute playful way but I find that this just seems a bit dangerous,” they said.

While there are certain regulations that apply to the advertising of alcohol in the US, American Addiction Centers notes that “the First Amendment allows for a lot of freedom of speech in general and therefore limits how much the federal government can regulate advertising.”

However, according to the Alcohol and Tobacco Tax and Trade Bureau, which regulates the advertising of alcohol under the Federal Alcohol Administration Act, there are certain requirements for any advertisements of alcoholic beverages in the US.

The website explains that it defines the term “advertisement” as “any written or verbal statement, illustration, or depiction, which is in, or calculated to induce sales in, interstate or foreign commerce, or is disseminated by mail, and that this also applies to social media.

When it comes to distilled spirits, the TBB requires certain information to be included, such as the name and address (city and state) of the permittee responsible for the advertisement, the class and type of distilled liquor, and the alcohol content shown as per cent alcohol by volume.

The Federal Trade Commission (FTC) also notes that most alcohol advertisers follow a “self-regulatory code” that “directs that no more than 28.4 per cent of the audience for an ad may consist of people under 21”.

This is not the first time that Jenner has sparked backlash over her tequila brand, as the reality star previously faced accusations of cultural appropriation over the brand’s advertising, which saw her dressed in jeans, braids, and an oversized shirt with a cowboy hat slung around her neck as she led a horse in Mexico, where the spirit is distilled.

The Independent has contacted a representative for Jenner for comment.