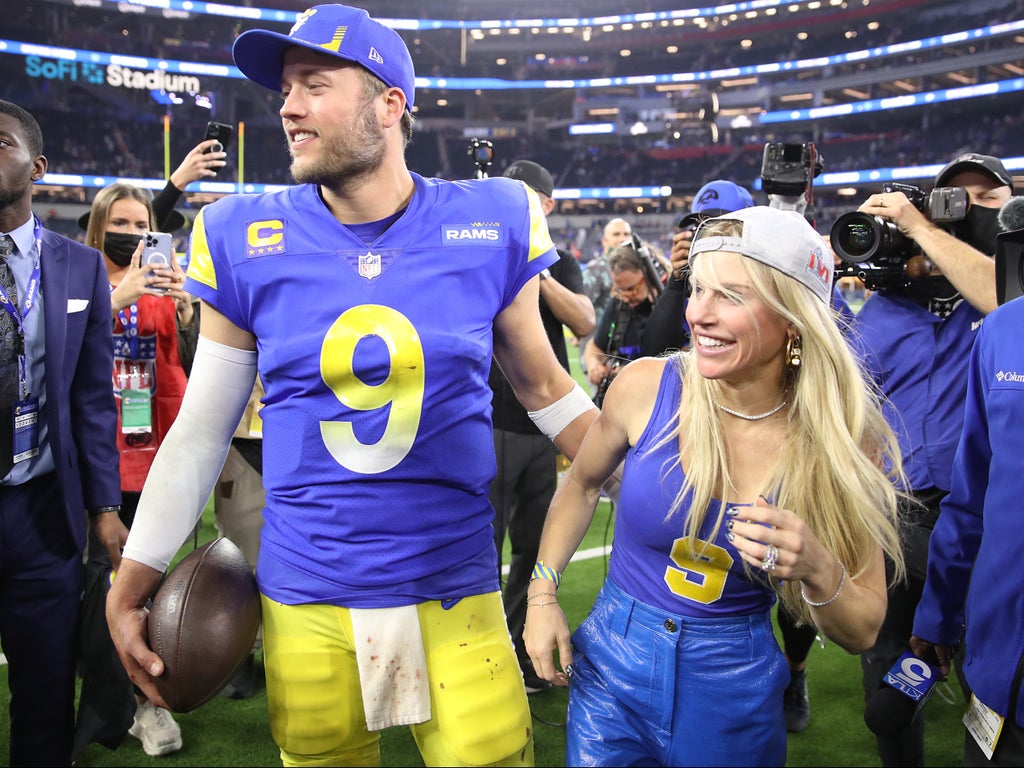 KElly Stafford, the wife of Los Angeles Rams quarterback Matthew Stafford, had recently given birth to her third child when she first noticed symptoms. Walking out after getting a massage, she felt dizzy and lightheaded. The symptoms subsided quickly, but returned a week later.

“This time, I was holding our daughter, Hunter, who was just an infant,” Stafford later recounted in an essay for ESPN. “The room started spinning around me and I felt like I was going to fall down. I almost threw Hunter at Matthew, because I didn’t want her to go down with me.”

During a visit to the ER, Stafford was given medication for vertigo, which didn’t have any effect on her. An MRI eventually showed that Stafford was suffering from an acoustic neuroma – a noncancerous brain tumor also known as vestibular schwannoma, which was impacting some of her cranial nerves and causing her symptoms.

Stafford, who hosts the podcast The Morning After with Kelly Stafford, chronicled her diagnosis, treatment, and recovery on social media. In April last year, she shared an Instagram post after getting a clear scan, two years after she was first diagnosed. And she was on the field on Sunday (30 January) celebrating with her husband de ella after the Rams defeated the San Francisco 49ers and thus advanced to the Super Bowl, which will be held on 13 February.

Acoustic neuromas are rare, accounting for less than 1 per cent of brain tumors according to physician James Naples writing for Harvard Health. They are diagnosed in 2,000 to 3,000 people annually, an incidence of 1 per 100,000 per year, according to Johns Hopkins Medicine. Common symptoms include hearing loss on one side (progressive or sudden), ringing in the ears, balance issues, and dizziness, as was the case for Stafford. Treatment options include surgery or radiosurgery, during which the tumor is treated with radiation rather than a surgical procedure.

In Stafford’s case, she was told surgery would be necessary in order to remove the tumor. “I was terrified,” she later wrote on ESPN. “…What if this thing gets taken out and something goes wrong? What if something happens before that? My biggest fear is not being here, and not being here to raise my girls.” (She and her husband de ella now have four children; their two eldest, Sawyer and Chandler, were born in March 2017, their daughter Hunter followed in August 2018, and their youngest, Tyler, was born in June 2020, 14 months after Stafford’s surgery.)

Stafford also feared some of the possible effects of the tumor, such as hearing loss or facial paralysis, which can be caused by the tumor itself or by removal surgery. In an Instagram post announcing the diagnosis on 3 April 2019, Stafford wrote: “I’d be lying if I said I wasn’t completely terrified of brain surgery. Yo soy. I am terrified of them opening my head, I’m terrified of losing my hearing, I’m terrified of losing facial function, I’m terrified of far worse things that could happen and I’m terrified that I won’t take the time I need to recover because the guilt I might feel of being absent from my kids for too long. I am telling y’all this to ask for prayers and support.”

Stafford’s surgery took place later that April. The procedure was originally supposed to take place over six hours, but she told her followers of her on social media it had lasted twice as long. In the following days, she shared updates about her recovery from her, at one point writing about the “pain and massive headaches” she experienced in the aftermath.

According to the Cleveland Clinic, a nonprofit medical center in Cleveland, Ohio, about half of people with small to medium tumors who have good hearing prior to surgery retain their hearing after the procedure. That was the case for Stafford, who announced in May of that year that her surgeon had managed to preserve her hearing from her.

“Here I am,” she wrote later that same month. “Healthy and alive and beyond grateful for every day. Enjoying my husband and family and getting used to my new norms. I realized I really don’t like riding in cars, especially in the back seat… a perfect excuse to always have shotgun. I don’t love loud, busy restaurants as much as I used to and I also struggle in areas with a lot of moving people (malls, airports, etc). I will wear heels, but with caution for me and everyone around me. I have become used to telling people I’m slightly ‘hard of hearing’ and I’ll give you a hug, but be aware I might take you down with me if you’re not completely still while doing so.”

In the same post, she thanked Matthew Stafford for his support throughout her diagnosis and recovery, writing: “Thank you Matthew. Thank you for taking care of me and our family and always putting us first. Thank you for always being my rock and keeping me at ease during the toughest time of my life. I’m lucky to know you and the man you are… but mostly, I’m lucky you chose me to do life with. Thank you.”

In September last year, Kelly Stafford welcomed her own mother Leslie Hall on her podcast The Morning After with Kelly Stafford for a conversation about parenting, in which they looked back on Stafford’s illness and surgery. Looking back on the moment her daughter de ella told her about her diagnosis de ella, Hall said: “I got stuck on the brain tumor [part]. You went on to explain what kind of it was, but it took me a moment to get past that you had a brain tumor. … I couldn’t believe it. It took me a while to process the fact that it was acoustic neuroma and it was benign. Benign was the big thing.”

“You are tough,” Hall told Stafford. “You are very tough. You went through a lot. Your brain had to completely rewire and retrain. It was a lot, and it was tough, and I was so proud of you. … The way you and Matthew both took that on, from the time you told me to the time we first saw you after it was all over – that was a rough period.”