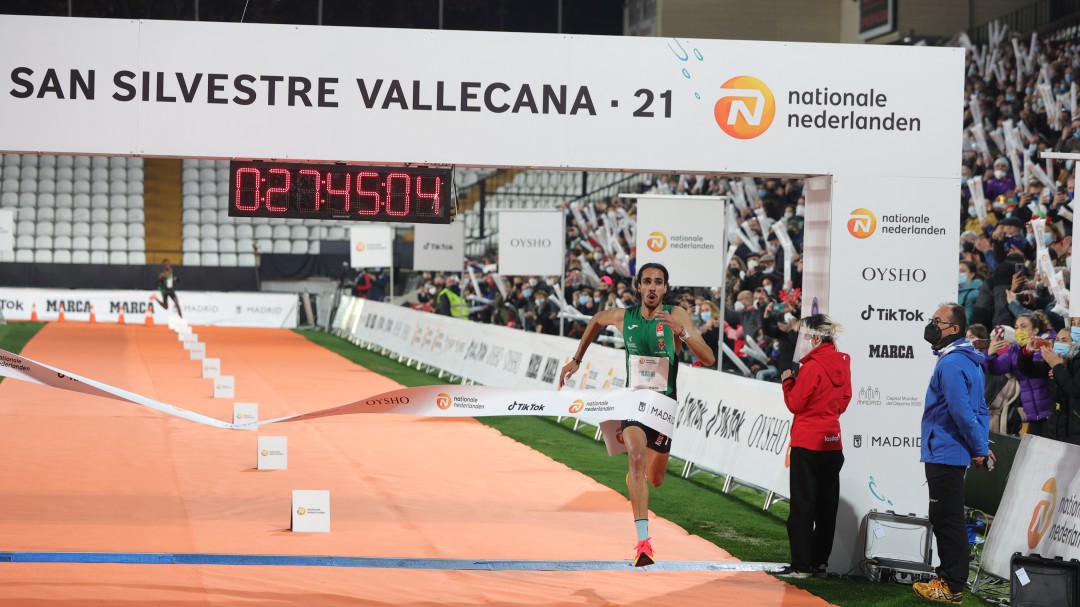 The Murcian Mohamed Katir, national record holder of 1,500, 3,000 and 5,000 meters on the track, achieved this Friday the first Spanish victory since 2003 in the San Silvestre Vallecana, which in the women’s category registered the triumph of the Ethiopian Degitu Azimeraw Asires, in her first race of 10 kilometers on asphalt.

Since Madrid’s Chema Martínez prevailed in 2003, no other Spanish athlete had achieved victory in the Madrid New Year’s Eve classic, which this year returned to its traditional route.

In a heads-up with the Burundian Rodrigue Kwizera, his teammate at Playas de Castellón, Katir was left alone in the lead when entering the Vallecas neighborhood and won with the best mark obtained by a Spaniard in the 44 editions of the race: 27:45. Kwizera arrived 10 seconds later, and another Spaniard, Nassim Hassaous, completed the podium with 28:05, leaving out the Kenyan Shadrack Koech (28:16) and the Spanish marathon record holder, Ayad Lamdassem (28:19), who has already climbed four times to the drawer in secondary positions.

The warmest San Silvestre Vallecana in history, with 17 degrees in the mass start at 4.30 p.m., had reduced the contingent of runners to 25,000 in the popular race and 1,200 in the international race, starting their 10-kilometer route. next to the Santiago Bernabeu stadium to continue along Calle de Serrano, Puerta de Alcalá, Cibeles, Atocha and, along Avenida Ciudad de Barcelona, ​​to the Vallecas neighborhood, within whose stadium the goal was located.

The organizers did not skimp on preventive measures to save, recovering their classic route, a race that the previous year had been limited to elite athletes, and in a closed circuit of the Ensanche de Vallecas, to survive the pandemic.

Half an hour before the international start, it was learned that Kenyan Hellen Obiri, a great favorite, and Ugandan Abel Sikowo, candidate for the podium, tested positive for covid and could not start.

Kwizera, a resident of Spain, who came from sweeping the Spanish cross-country campaign with triumphs in Itálica, Soria, Venta de Baños, Alcobendas and Lasarte, and a second in Atapuerca, after Eritrean Aaron Kifle, started as a favorite.

In addition to the victory, his sights will be on the test record, the astonishing 26:41 time credited by Ugandan Jacob Kiplimo in 2018. His most notable rivals were lKatir and Kenyans Shadrack Koech and Emmanuel Kiplagat, of 19 years.

Spanish marathoners Dani Mateo and Yago Rojo set the tone for the first two kilometers. Down the hill, along Calle de Serrano, the Soriano and the Madrilenian put on a lively rhythm that caused a first cut of a dozen in the lead. Also in the first group were Mohamed Katir, Spanish record holder of 1,500, 3,000 and 5,000 on the track, Ayad Lamdassem, who holds the marathon record, and Abdessamad Oukhelfen, national cross-country champion. They went through km 5 in 13:45 km, while the first women did it in 14:37, at the pace of the test record.

Katir accelerated to the point of entering the Vallecas neighborhood, where the hardest part of the course was, and took his teammate Kwizera with him. No one could match his bet.

The Spaniard fought to leave behind Kwizera, who was barely following him, and in the last kilometer, Katir finally opened a decisive gap that allowed him to celebrate his triumph with 200 meters to go.

Victory of the Ethiopian Azimeraw

The women’s race, after the loss of the favorite Obiri, was a duel between the debutant Degitu Azimeraw Asires and the Kenyan Edinah Jebitok that was resolved in favor of the Ethiopian, winner with a time of 30:26 with a margin of 18 seconds / above. his great rival. Kenyan Lonah Salpeter (31:14) took them to the podium.

Three hours earlier, the Castilian-Manchego David Bascuñana (Cínicas Menorca) and the Madrid junior Claudia Gómez (Suances) achieved victory in the popular race, which with 25,000 face-to-face runners and another 15,000 virtual ones, returned to the program after being suspended in 2020 for the covid pandemic. The two set new test records with 29:13 and 34:10.